A bizarre game with a perhaps timely message

Hideo Kojima’s Death Stranding is a divisive game. It launched towards the end of last year at the culmination of its three-year-long-hype and was met with resounding cries of “huh, neat” or “meh” depending on which side of the divide you happened to fall upon (take a look at my review to understand why).

One thing that is relatively universally accepted by those who have played Death Stranding, however, is the message: connection is important.

Perhaps then, Death Stranding is a game that we need right now. Certainly looking at the game, there are some troubling similarities between the American supernaturally-afflicted post-apocalypse and our own present situation: people holed up inside to protect themselves and those around them? A society where most interaction with other people has to take place over video call? Where social media has become the primary method by which people interact with the events of the outside world? It all seems a little uncanny given our current situation.

So then what, if anything, can Death Stranding teach us about isolation and connection, hopefulness and nihilism, in the age of Coronavirus?

Well, maybe one thing it can do is remind us of a more naïve time in social media. In a time before the Facebook “angry” reaction and Twitter wars. I mean let’s not be looking on the old internet with rose-tinted spectacles – flame wars are nearly as old as the internet itself – but Death Stranding presents a social network in which people “like” the things you do that do good within the world. If you place down a bridge at a useful crossing over a river, a fellow player might give you a like for making their journey easier. It’s a social media which encourages and rewards social interaction and engagement, rather than being a cult of personality, as can often be found in the internet social space today. Death Stranding presents us with a de-politicised internet, and whether or not we take that as a good thing. I must admit the overwhelming desire of players to help each other, and the appreciation they show each other for that in turn – enabled by the game’s social media mechanics – is one of the most joyous experiences of playing the game.

However, Death Stranding does also show a dark side of this social-media-mediated culture. One of the items you sometimes have to deliver between shelters is medicinal oxytocin, as a result of a worldwide deficiency of the hormone in people, caused by the collapse of the old world’s social media. “Like addiction”, summarised as a chemical deficiency of reward hormones caused by and requiring the oxytocin rush of being “liked”, is a severe problem in the post-Death-Stranding world, where human connection, meaningful work, and that critical social media connection have all been stripped away. It’s almost individualistic, implying that an overdependence on validation from others to maintain basic function is the logical conclusion of a society connected in such a way.

But individualism wouldn’t seem to be the philosophy that Kojima is following here, far from it. Instead, he seems to be calling for a reforming and remoulding of the connections that bind society together. It’s clear that the principle of an interconnected world is something Kojima strongly believes in – that being one of the key objectives of the game and the mechanic from which much of its unique experiences come – but there is also a dissatisfaction towards the status quo of the way social media is being used. Kojima has already expressed the idea that Death Stranding is a post-Trump, post-Brexit game, and you can quickly see how the social media system in the game is in direct conflict with how it has been used in recent times.

'We may be connected through the internet more than ever, but what's happening is that people are attacking each other because we're so connected,'

Now, in the age of Coronavirus, we are seeing this idea manifest once again. People have turned government advice to self-isolate into a club to beat people with. What’s more, because of the way the quarantine has been established as a way to “save lives”, these people now have validation to claim themselves not as social-media bullies, but paladins of the greater good, bringing shame and dishonour upon those who would dare flaunt the decree of the great and mighty god-king Bojo.

In all seriousness, however, examples keep appearing of people using social media as a vent for the bottled up frustration this situation is bringing. Still, it increasingly becomes an attack not at our circumstances – which are too vague, complicated, and nebulous to feel a satisfying target – but at individuals. Some examples of this new crusade people have launched do, admittedly, exist (at least initially) external to social media, such as the NHS worker who was left aggressive notes on her car when a neighbour noticed her travelling (to work!) every day.

Others, however, rely inherently on the public and shareable nature of social media, such as the lady who took the opportunity of Boris Johnson being in hospital to wish death-by-coronavirus upon him publicly, and then the small army of people that continued to share and harass her about the post long after she removed it (and indeed her account), crying “shame on you!” (I won’t link that particular post, I want no part in further disseminating such vitriol from either party).

With these mud-slinging events as a backdrop, a social media system where people reward and appreciate each others’ help seems appealing. What would even be lost, one might argue? How much of a serious discussion about politics has ever been accomplished on Facebook or Twitter after all?

That might lead to accusations of elitism on my part, and I’ll admit that social media has done some good in raising awareness of politics and the political discussion to the general public, but the fact of the matter is that the very format of these services is not geared towards genuine discussion and debate – it’s simply not what it’s designed for. We need to try and move the political discussion away from the 250 character limit of Twitter and onto sites like Kialo, accessible to and by anyone as much as Facebook and its contemporaries and - crucially - designed for these kinds of discussions. A naïve perspective maybe, but one that the systems of Death Stranding might make an appealing dream to players.

Redefining the nature of our connectedness leads into the other central duality of Death Stranding: nihilism vs hope. This, again, very much plays into the ideas with the state of the world – actual and digital.

In Death Stranding, the world exists in a post-apocalyptic state (arguably mid-apocalyptic). Birth rates are through the floor as people are confronted with the idea that they exist in a world that they do not want to bring life into. Whilst we do not live in an age of despondency of quite that magnitude, there is a clear parallel in the fight between Sam and Higgs and that of attitudes to our world at present. Higgs wants to watch the world burn. The world is broken beyond repair, and the end is inevitable, so what does it matter when it comes? Sam, over the course of the game, by contrast, learns to value the connections he has formed and wishes to fight for them, believing there is good to be found in the world if everyone works to improve it, to become more connected in a meaningful way.

It is easy to look at the political, environmental, or – as of late – medical situation of everything and wish to forgo the outside world entirely, to withdraw within oneself, to isolate. However, Death Stranding prompts us instead not necessarily to be like Sam but to be like the people in the settlements that Sam helps pull together with the “chiral network” he builds: locked inside by necessity, but rejoined and reconnected under the idea that a society united stands at least a chance of being better than one torn apart by boundaries that circumstance has forced upon it.

Death Stranding is a flawed game in many respects, but its core message of connectedness is one that seems to speak with stark urgency in the current climate. What we can reasonably do in response is maybe to remould how we treat social media as a platform and shape it into something that builds bridges to help our fellow internet users through these trying times, rather than a tool to vent our own internalised frustrations at those unfortunate enough to be standing in our path. 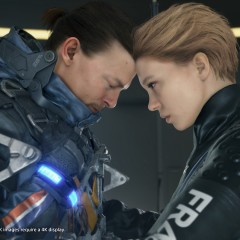 Death Stranding: Connection and isolation in the midst of coronavirus

A bizarre game with a perhaps timely message