Every April the National Sexual Violence Resource Center of the United States runs Sexual Assault Awareness Month. Arguably already one of the lesser-known campaigns, this year, like with so many other other social and political issues, the campaign has unfortunately become a backbencher in many of our consciousnesses.

But while the iron-clad fist of Covid-19 may direct our attention in the direction of certain specific causes, it also provides us with time to reflect on other social struggles. Never in recent history has there been so much social upheaval. It therefore also follows that never in recent history have we had such a chance to reorganise our society and realign its values. Perhaps lockdown is a chance for us to consider the changes we would like to see implemented when we finally emerge from our homes, free from social distancing.

This year the theme for Sexual Assault Awareness Month is “I ask” - a simple phrase, yet rich in interpretations. It requests consent, requests awareness, requests resources. It sets out a mantra which underlines the principles of the National Sexual Violence Resource Center, which is to prevent sexual assault by raising awareness. In an era of #Metoo, we are already experiencing a shift in attitudes towards sexual assault. However, with Sexual Assault Awareness Month only being officially recognised the once – in 2009 by President Obama – it is clear that this field still requires a great deal of attention. In addition, with the legalities surrounding consent sometimes open to subjective judgements, the enforcement of laws protecting victims of sexual assault is not always foolproof.

While organisations such as ‘UK Says No More’ and ‘The Survivor’s Trust’ are also championing this cause in the UK, we are yet to enforce such vigilant teachings within the national curriculum, which only requires relatively basic concepts of consent to be taught. As such, while Black History Month and Holocaust Memorial Day have always played a vivid role in my memory of school awareness events, Sexual Assault Awareness campaigns have not done so to the same degree. Perhaps the UK should also adopt April as our Sexual Assault Awareness Month?

With an optimistic outlook, one might hope that our time in lockdown will make us appreciate relationships in a more sensitive manner, leading to a decrease in sexual assault cases as we mature as a society. However, there is also the likelihood that the restrictions of lockdown could lead to reckless behaviours after it is lifted – a potential which must be avoided at all costs to limit the likelihood of sexual assault. Either way, it is evident that now is the perfect time for reflection – both on our own attitudes and on those which we disapprove of in society. And after all this is over, it will be the perfect time for widespread societal behavioural changes.

Let’s just hope we make the right changes when we get the chance. 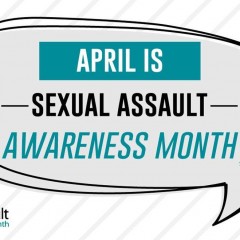