During the Tate Exchange ‘Uni 2 Unicorns event, I took part in an interactive workshop to find out more about the potential for artificial intelligence to identify and mimic human emotion.

The workshop commenced with a game of AI Cluedo in which guests were assigned a photo of a human face and attempted to guess which face was the AI robot. As a collective audience, we failed to detect the real robot, highlighting the power of technology to develop AI bots indistinguishable from humans. The computer generated faces were impressive, they could wink and even wave at the audience! UAL researchers showcased the innovative and creative possibilities of AI by pointing out the minute attention to detail on the robots' humanlike faces – from wrinkles to dimples.

Although there may be a human resemblance, should AI also recognise and utilise human emotions? The researchers gave examples of  ‘smart shelves’ that connect to your smartphone and analyse your spending behaviours to make supermarket shopping easier. Or cars that study the emotions of drivers and predict when an accident is more likely to occur. Biometric measurements can even analyse human reactions to digital games and develop a bespoke gaming experience to match users’ specific interests. While workshop participants were eager to try out AI, they were equally cautious of the ethical implications of emotion-based technology. If humans struggle to know how to react in a crisis, will AI technology make better, research-informed decisions or fail to distinguish the complexity of human emotion?

Emotion based technology is, however, still in the early stages of development. Interestingly, the researchers explained that AI can struggle to understand the nuances of emotion inherent in different cultures. Different cultural groups may exhibit the same emotion with differing levels of extroversion depending on social norms and traditions. This can pose challenges if AI is unable to register the nuances of these felt experiences.

The researchers then explored how AI can not only recognise but even mimic human behaviours. For instance, it is difficult to differentiate whether an online chat bot is indeed a bot or a friendly human in an office somewhere. The bots present realistic chatter because they learn from human interactions, storing appropriate expressions to try out on their next customer. AI childminders also learn from their interactions with children, developing a customised nurturing experience. Unlike teenage babysitters hoping to make a bit of pocket money, AI minders come without the human fallibility of running late, forgetting to change a nappy or spilling formula milk. Surely then, they are safer and more reliable than humans?

The audience’s reaction to AI childminders was understandably mixed. When asked whether she would use them for her own children, one guest admitted frankly ‘I’m just not there yet’. The main sentiment behind this ambivalence seemed to stem from a fear of the unknown future of the tech industry’s potential.

In fact, the hosts referred to the ‘uncanny valley’ concept, which suggests that as robots appear more human in their facial features and emotions, they become more appealing to humans, but only up to a certain point. Once this point is reached, the technology elicits an unpleasant and eerie feeling. For me, the bots on the board were a realisation that humans can easily be mimicked, reducing the human species to something inconsequential. Perhaps our worry of being outdone as a species, replaced even, is the very human instinct that makes us fear the human face of AI.

The researchers facilitated an honest, explorative workshop around research into emotion-based AI, demonstrating its groundbreaking potential to impact our everyday lives. I found that this unexpectedly provoked questions around what it means to be human and how we can learn to grapple with our own emotional response to AI, just as AI learns to grapple with us. 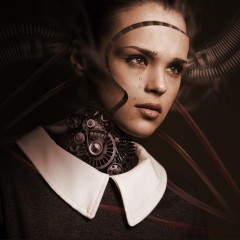 The human face of artificial intelligence

During the Tate Exchange ‘Uni 2 Unicorns event, I took part in an interactive workshop to find out more about the potential for artificial intelligence to identify and mimic human emotion.