With the release of the newest Emma adaptation, I put my favorite adaptations of the Jane Austen novel to the test. I’ll compare the best bits of the 1996 movie, the 2009 BBC mini-series and the recently released 2020 adaptation of Emma.

Before Jane Austen began writing her fourth novel and final novel, she said "I am going to take a heroine whom no one but myself will much like." In Austen’s most satire-filled novel, the audience meets Emma, a beautiful but spoilt young lady who encounters several romantic misunderstandings. There have been a variety of adaptations; several films, many television programs and even two musicals. These adaptations all measure up in different ways but the most well-known adaptation is the 1995 movie Clueless, a modern movie that takes inspiration from the novel, but only loosely following the story. I’ll be comparing my favourite adaptations of the novel. Firstly, the 1996 movie, starring Gwyneth Paltrow as Emma, which was generally positively reviewed. Secondly, the four part mini-series created by the BBC and lastly the recent Emma., which was released on Valentine’s Day 2020. I’ll be splitting my comparisons into several categories and then discussing each adaptation.

The 1996 adaptation of Emma is the least colourful and most restrained in terms of costume and set. However, this gives a more elevated feel to the entire movie and I especially enjoyed the garden and greenhouse scenes. The story is given elegance, reflected in the delicate and simple costumes. It’s the most romantic in style and tone out of the three adaptations and has the most features of a typical period drama, whereas the 2009 mini-series has more character detail and the 2020 version is more stylised. The overall tone and styles of the different adaptations are quite distinct, however.

The 2009 Emma mini-series has beautiful, colourful costumes that are pleasing to watch. The hairstyling in this adapted mini-series even won the show a Primetime Emmy Award for Outstanding Hairstyling for a Miniseries or a Movie. The set, grounds and overall design is charming and appropriate for this take on the story of Emma. It has a similar, romantic, comforting feel to the 1996 version and the actor’s performances are immersive and engaging.

The most recent Emma is less safe than the previous two versions. Instead of traditional period drama style, it is highly-stylised, colourful and at times, ridiculous. Careful cinematography combined with a perfect Georgian-era set design and costumes creates a movie that is coordinated and stunning. Personally, I think the 2020 adaptation hits a good tonal balance of satire and romance, with contrastingly intimate and absurd scenes. The stark differences between period-appropriate behaviour and the more relatable, human moments of the characters combined with the extravagant styling of hair and grand costume creates several levels of humour.

The 1996 movie really shines in its portrayal of the friendship of Emma and Harriet Smith, an orphan who Emma becomes friends with. It’s clear in this version that Emma becomes friends with Harriet ─ despite their differences in status ─ because they have similar characteristics and they enjoy spending time together. Harriet is shown to have a personality and not just someone Emma toys with, which is how their relationship is portrayed in the 2020 version. The relationship and love between Emma and Miss Taylor, her bride-to-be governess, is very clear in the 1996 adaptation of Emma, and their scenes together are some of the best of the movies.

The 2009 mini-series, at four hours long, has more time to delve into the intricacies of the plot and therefore is able to be more faithful to the novel. For those who prefer adaptations that don’t stray, this is probably the best version of Emma. The casting is apt and this version really captures the character of Frank Churchill, getting the combination of his coy and misleading nature. More backstory is given, due to its sprawling runtime, and this gives the audience more opportunity to understand the dependency Mr Woodhouse has on his daughter, Emma, and explore their relationship in detail.

The 2020 adaptation manages to capture more intimate character moments, while still being humorous and well-paced. There was more exploration of Mr Knightley’s character, as he had scenes when vulnerable and alone, on the floor in distress, and a scene where he was getting dressed. This original take on Knightley made him seem more realistic, as his flaws and vulnerabilities were explored. The movie was also extremely funny, as seen in the trailer; the running joke with Mr Woodhouse and the drafts had an amazing payoff at the end of the film. Casting Bill Nighy as Mr Woodhouse was perfectly hilarious and, for his little screen time, he stole the spotlight every time he was on screen. Another reason this movie worked was the satisfying character development; we meet a spoilt, vain, mean Emma at the start of the movie but by the end her change is clear and recognisable.

The romance in the 1996 movie is heightened, as the attraction between Emma and Knightley is hinted at from the beginning of the movie. The whole movie has a sweet romantic-comedy tone. The build up of Emma realising her love and trying to tell Knightley is paced well, and I like how this version clearly shows how desperately Emma wishes for Knightly not to be in love with anyone else but her.

The 2009 version features the most humble and honest Knightley, with incredible chemistry between the two leads. Every scene they have together is exciting and due to the longer nature of the adaptation, there is more time for the romance to build.  In my opinion, this version has the best Knightley confession scene, which is the climax of the story. The mini-series also has a gorgeous, orchestral musical score, giving the whole show a romantic feel.

And last but not least, the 2020 Emma adaptation. The realism of the characters make the development of the romance the most believable of the three. The absurd nature of a nosebleed during a love confession, and the fumbling nature of the confession itself, makes the confession not only tender but bizarre. Overall, the slightly unconventional take on Emma pays off, due to the perfect balance of humour and emotional vulnerability.

Before I conclude, a special comparison of my favourite scene of Emma — the dance scene. The dance scene is the first scene when it is apparent that Emma and Knightely are falling for each other. The 1996 version doesn’t place much importance on the scene, but in the mini-series, it is a sweet, tender romantic scene, which never fails to make me smile.

However, I believe that the best dance scene is in the 2020 adaptation, which shows the spark between Knightely and Emma with clever use of sound design, so the audience hears the gentlest touching of clothes while they dance.

I think the 2020 version of Emma shows the most understanding of Emma's character, and her desire to do good and grow through the story. This adaptation perfectly captures the intricacies of every character: pompous Mr Elton, rude Mrs Elton, worrisome Mr Knightely. It was funny and true to the story and while I came in believing that my love for the 2009 mini-series would not be surpassed, I was pleasantly surprised. If you are a fan of period dramas, Emma or slightly bizarre movies, I would recommend you catch Emma. in cinema. 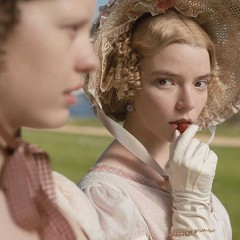 With the release of the newest Emma adaptation, I put my favorite adaptations of the Jane Austen novel to the test. I’ll compare the best bits of the 1996 movie, the 2009 BBC mini-series and the recently released 2020 adaptation of Emma.