With so many bands jumping on the Climate Change bandwagon, do their messages create behavioural change? With the amount of plastic left at The O2 after The 1975 graced its stage, the answer appears to be no. But where does the blame lie?

“It’s Time To Rebel!” shouts 17-year-old climate activist Greta Thunberg through the O2’s mammoth PA system as her collaboration with The 1975 finishes playing. Throngs of youth all stand in solidarity holding their fists to the air in defiance of the climate mess we’ve found ourselves in. The sight would’ve been poetic and tear-jerking had you not seen the mess of plastic cups left on the ground as the floor cleared.

If a fanbase that preaches about climate change on their social media accounts think leaving that mess behind is ok, is there any hope at all for our future?

This is fast becoming a problem amongst music fans at shows but where does the blame lie? Should we be blaming music fans at all? Should venues stop using single-use plastics? Should they provide easy accessible recycling points? Or should bands insist on their riders that no single use plastic is to be used when they play?

You might argue that the responsibility lies with bands, especially those that have styled themselves as ‘eco warriors’. When you have the bargaining power of, say, The 1975, you could make it a rider condition to simply refuse to have single use plastic on site full stop. After all, Morrissey could demand that no meat be served anywhere on site when he’s performing. Star power has its benefits. But then again, if you’re campaigning to your fans about taking small steps to reduce plastic consumption, you would hope they would care enough to take two minutes to find a recycling bin…

Many people have called for venue policy change, thus removing the onus from bands OR their fans to make music more sustainable. While it may cost more in the short term, if it helps preserve the future of live music as we know it, surely it’s a price worth paying?

Wherever the answer lies, let the message be loud and clear to music fans and climate protectors everywhere… Practice what you preach! 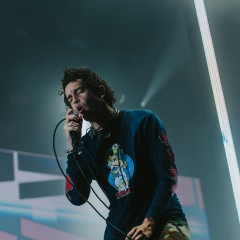 The plastic cup: A thorn in the eco warrior musician’s side

With so many bands jumping on the Climate Change bandwagon, do their messages create behavioural change? With the amount of plastic left at The O2 after The 1975 graced its stage, the answer appears to be no. But where does the blame lie?