The 92nd Oscars are tonight, who will win big and who will leave empty-handed?

This has been a confusing year for the Oscars. On the one hand, things are wildly different with a record number of nominations for Netflix with The Irishman, Marriage Story, and The Two Popes as well as an unusually high number of nominations for a foreign-language film with Parasite. On the other hand, things have depressingly stayed the same (or even regressed) in big ways, with no female directorial nominations and only one POC nomination in an acting category. Also, this seems to be a year of extremely narrow voting from the Academy, with this being the first year ever that four films have Oscar nominations in double figures. However, that doesn’t mean there isn’t room for some big surprises on the night, so here’s a guide to who I think will win big and who should.

Best Picture is probably the most interesting race this year, with four main contenders: 1917, Joker, Once Upon A Time In Hollywood and Parasite. Each of these films has its own appeal. 1917 falls into the very familiar and comfortable ground of a (pseudo-historical) war film that manages to be largely apolitical. It also has a legendary cinematographer in Roger Deakins and an auteur narrative with Sam Mendes. Joker uses the filmmaking language of prestige film, whilst also having (ostensibly) deep themes and a near-universally acclaimed leading performance. Once Upon A Time In Hollywood has a reverence for an era of film and American history which is likely shared by many Oscar voters, alongside great performances all-round and a director who has made many renowned films but never received a Best Picture Oscar. Parasite bursts onto the scene as the critical darling, feeling completely different from anything else that's in contention here.

In my opinion, the likely winner is 1917. The film has picked up steam at the perfect time, winning the BAFTA, Golden Globe and PGA in the run-up to the Oscars. Furthermore, the all-in-one-shot gimmick and the emotional elements of the film reflecting Mendes' Grandad’s experience of World War I makes this film Oscars catnip. For me, Parasite is the superior Best Picture nominee, with its biting critiques of capitalism and phenomenal cast.

From the moment Joker came out, it’s been obvious that Joaquin Phoenix is going to get the Oscar for his performance, especially since he has won almost every single precursor award. He gives an intense performance which even people who despised Joker (like me) found somewhat impressive. If you combine this with the general feeling that he’s overdue for an Oscar after years of fantastic performances, like 2018’s You Were Never Really Here where I’d argue he did a more interesting version of his Joker performance, it would be wild to suggest anyone else has a real shot. However, I will say that I much prefer Antonio Banderas in Pain and Glory. His performance has a nuance, range and tenderness which Phoenix’s Joker lacks, with a tight attention to detail and genuine humanity.  Slightly frustratingly, it seems that the Oscar will go to the Most Acting as opposed to Best Acting.

Given her lack of presence in Hollywood films over the past decade, Renée Zellweger’s brilliant performance in Judy puts her in poll position for the Oscar. On top of an amazing performance, she also has a comeback narrative and is playing a beloved figure in a biopic, setting her up perfectly for a deserved win.

Once Upon A Time In Hollywood is full of great performances and Brad Pitt as Cliff Booth is no exception. Much like in real life he exudes cool and brings that classic movie star energy. It’s hard to find someone who dislikes Brad Pitt, and that likeability plus the fact that he’s never won an Oscar for acting, combined with the quality of his performance in Once Upon A Time In Hollywood (even if I preferred him in Ad Astra) make Pitt a safe bet for the award.

One of the biggest surprises of the Oscar nominations was that there was nothing given for Jennifer Lopez's phenomenal performance in Hustlers. With her exclusion, the path for Laura Dern to finally win an Academy Award has been cleared. Given that she has never received an Oscar for any of her brilliant performances across her career and gives a very good and extremely Laura Dern performance in Marriage Story, it seems almost inevitable. Unfortunately, this leaves out my personal favourite performance in this category which is Florence Pugh in Little Women, who gives a phenomenal performance as Amy, giving her an incredible amount of depth and power.

Frustratingly, this is another year where only men have been nominated for the award, despite the fact that there were so many brilliant female directors making an impact like Greta Gerwig (a previous nominee whose film is up for Best Picture) or Lulu Wang and Lorene Scafaria. Out of the present nominees, the most likely seems to be Sam Mendes for 1917, given the clear auteur narrative that comes with his bold choices in the film, alongside his personal connection to the material. There's a reasonably high chance for an upset here with Bong Joon-Ho and Quentin Tarantino hot on Mendes' heels. My ideal winner here would be Bong Joon-Ho for the absurd energy that he brings to Parasite, as well as its very clear sense of purpose.

With 11 nominations under its belt, Joker seems to be the forerunner in this category which is wholly Best Picture nominees. This is especially likely when the (ostensibly) deep, complex and timely themes that run through its screenplay are considered. However, I would argue that most of what doesn’t work about this film is a result of the screenplay and a much better choice would be Gerwig’s screenplay for Little Women. She manages to breathe life into a text we’ve seen on screen many times before and add depth to the tale – epitomised in the phenomenal monologue she wrote for Florence Pugh’s Amy about the economics of marriage.

Out of the films nominated in this category, I think Parasite easily has the most interesting screenplay on the table here. It has so many interesting things to say about the world we live in and our relationship with wealth and social mobility. It’s also genuinely well constructed, managing to balance levity, absurdity and tragedy all at once. Whilst I doubt Parasite will win best picture I think it will do far better in the original screenplay.

Costume design is usually one of the categories where films like Dolemite is My Name come out of left field to get the win, but yet again this category is composed entirely of Best Picture nominees. Out of these, my personal winner has to be Little Women. Its beautiful costumes do a brilliant job of giving the feeling of comfort and warmth that permeates throughout the film. Whilst its chances in other categories are slim given how the Academy treats films by and about women, period pieces are basically Costume Design shoe-ins and this is a generally well-liked film – so it seems to be the most likely winner.

Original Score is another category predominantly filled with Best Picture nominees, with the notable exception of Star Wars: Rise of Skywalker. I think the most likely winner here is Thomas Newman’s 1917 score, which is fantastic and effectively creates tension and emotion in a film that the Academy are clearly big fans of. Personally, Alexandre Desplat’s Little Women score edges it for me, giving that film a lot of the warmth which makes it so powerful. However, 1917 isn’t a choice I would be disappointed by.

Perhaps one of the more surprising snubs of the year was Frozen 2 for Animated Feature, given the massive cultural impact of Frozen and the colossal amount of money that the sequel made alongside a reasonably good reception. ‘Into the Unknown’ is the only nomination for Frozen 2, and given that it’s a reasonably good song and everyone loves Frozen, it seems very likely that this song will grab the Oscar. Personally, I prefer ‘Stand Up’, with Cynthia Erivo reminding us that she is a phenomenal vocalist, and that entire song is inspiring.

Will win: Into the Unknown (Frozen 2)

Should win: Stand Up (Harriet)

Visual Effects is one of the harder categories to call, but the much-discussed de-ageing technology of The Irishman seems to make it a pretty good bet for the Oscar. Whilst the de-aging is pretty subtle and well done, I think that Avengers: Endgame is more impressive, making a massive amount of CGI work for a three-hour runtime. Unfortunately, I think the genre basically takes it out of contention for the prize, because many members likely haven’t watched it to begin with.

Will win: The Irishman 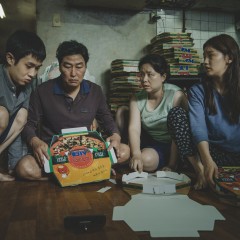 The 92nd Oscars are tonight, who will win big and who will leave empty-handed?