Voice MagBlogsAre YA Fantasies all…

Over the next 20 weeks I'll be diving into the genre of YA Fantasy. I'll be reading some highly rated series to see if they're really all they're cut out to be! This week I begin with 'A Court of Thorns and Roses' by Sarah J Maas.

When I was researching what YA fantasy books I was going to read, I quickly stumbled on ‘A Court of Thorns and Roses’ by Sarah J Maas. Thus followed a quick google search to discover rave reviews and that it was loosely based on the well known fairy tale of ‘Beauty and The Beast’. It seemed like a good place to start, after all, according to goodreads I had a great story ahead of me...

Immediately we’re introduced to the main protagonist, Feyre Archeron. A nineteen-year-old girl that has been forced to hunt in the woods surrounding her village. However, since this is a YA fantasy, it’s quickly established that a few miles north is an invisible ‘wall’ separating her human world from a land of cruel and murderous fae.

Living with her is a depressed father, unwilling to do any meaningful work after losing his wife and his life fortune on a trading ship, as well as two sisters who are more than willing to spend whatever money she manages to bring home. Maas does a rather extraordinary job of setting out a rather bleak, monotonous life and future ─ one that even I found hard not to relate to just a little bit.

The world building that occurs rapidly in the first few chapters did, at times, feel like it was just a bit much and went on for one or two chapters more than necessary. As soon as we’re introduced to this ‘wall’ it doesn’t take a genius to guess Feyre ends up on the wrong side. But nevertheless, the plot (finally) kickstarts as she shoots the wrong kind of animal (later we find out it was actually a faerie) and any annoyance you might’ve had about a lackluster pace are consequently thrown out the window.

That night a beast ─ that I might’ve found more terrifying as a teenager ─ comes knocking on their doorstep. To save her family, Feyre makes a bargain to leave with this beast and live the rest of her life ‘above the wall’. All in all, it’s not that a bad prospect for a teenager, despite her new home being full of magical beasts out to kill her.

Fast forward to her arrival in the ‘Spring Court’ – one of seven territories ruled by seven High Lords. A french style chateau covered in roses is her new home, where the beast – who transforms into a mysterious masked man with golden hair and forest green eyes – presides.

It’s later revealed that he is in fact the High Lord of the Spring Court. However, despite the writing style hinting at some ‘big reveal’ there had been enough clues that I was left rather underwhelmed.

Now since this is a YA fantasy, it would be a crime if the protagonist didn’t have a love interest, so over the course of the book, Feyre slowly falls in love with the High Lord. Everything seems nice and fluffy in what appears to be a picturesque springtime landscape, except since this is a YA fantasy so nothing can be fluffy or picturesque for long.

Clearly, from the number of times it’s mentioned it’s an integral part of the plot. It’s also clear that there’s more to the problem than any of the characters initially let on. It’s plot importance is made so clear that it just became irritating and overused as a plot device.

A side note: After reading the entire novel it’s obvious it was intended to draw intrigue...without the side effects that made me want to hurl the book into the River Thames.

Thankfully Feyre eventually discovers the true cause of the magical blight; the impact from a tyrannical regime by the rogue fae general ‘Amarantha’, who hails from a neighbouring continent called ‘Hybern’.

Despite the majority of characters in this book lacking in the character development department, Amarantha’s character was a pleasant surprise. Or perhaps I’m just a sucker for a villain? Considering she only appears in the final third, you learn a huge amount about what makes her tick through intricate backstories.

Through a series of well-written trials, Feyre (and the reader) is reintroduced to the ‘dark and mysterious’ male (now known as Rhysand) encountered twice before. On both occasions his character is written ten times better than any other character appearing alongside him, so it was a saving grace that he features heavily and we could learn about his true character.

In fact, as a reader, I felt I had a better grasp of his character by the end than I did of any other. However, there’s an obvious (sometimes forced) continuation of his ‘bad boy’ story in which he appears to be Amarantha’s lackey and favoured partner. Despite this, it’s also made just as clear that there’s more to him than Maas initially lets on.

It’s exactly the right kind of intrigue I like and to say it helped the books overall readability is an understatement.

The book ends in a slightly convoluted, and somewhat predictable way (although perhaps that’s with the knowledge that this is the first in a series) but the level of intrigue surrounding key characters now reaches a crescendo. Surprisingly I’m somewhat excited to read book two! 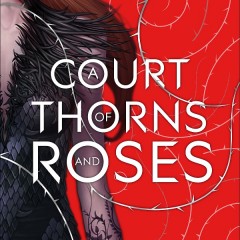 Are YA Fantasies all they're hyped up to be?

Over the next 20 weeks I'll be diving into the genre of YA Fantasy. I'll be reading some highly rated series to see if they're really all they're cut out to be! This week I begin with 'A Court of Thorns and Roses' by Sarah J Maas.