Out of the fiery ashes of our societies outdated diet culture obsession, The Anti Diet Riot festival was born.

The moment January comes around, the western world goes into diet mode. Every advert, and every person's new year's resolutions focus on how many pounds they can lose in a month, and what foods they will no longer be consuming. All our friends are on a new diet we "have to try", and if you don't want to jump on the bandwagon, there is practically no escape.

However, it is 2020, and with a new decade comes a new era of feeling good, and it has nothing to do with dieting. On 19 January, 2020, The Anti Diet Riot festival descended on London to give people a better, more positive way to start the year, through a celebration of "body justice, pleasure positivity and radical self-love".

The Anti Diet Riot Club started two years ago when founder Becky Young created a series of meetups and events that not only challenged but completely discredited the diet culture phenomenon that had been the norm for years. The festival has bought the body positivity movement, that mainly consists online, to real life, with real people, celebrating everything that mainstream media works tirelessly to silence.

The talks covered a series of fascinating, hard-hitting topics including 'The Politics Of Ugliness', 'The Masculinity Panel' and 'Revolutions not Resolutions'. The festival was not only centred around trying to give people a way to block out the noise on diet culture, but also covered classes and workshops on self-pleasure. Sex educator Ruby Rare hosted a workshop called 'Ruby Rare's Guide To Sex Toys' as did Sex+ Magazine on 'Prioritising Your Pleasure'. In case you needed another reason to go to this one-of-a-kind event, the festival had an in-house Reiki master and a foyer filled with stalls such as The Fempowerment Box, a craft station, a bookstore that strictly sold titles promoting body positivity, and food by The Orange Buffalo.

The Anti Diet Riot is a genuine celebration of people, born out of a toxic culture that not only encourages eating disorders and distorted thinking with its rhetoric, but turned the 'body positive movement' into a celebration of exclusivity opposed to inclusivity. The festival created a safe space where people of all shapes, sizes and sexualities could flaunt what they have without fear of judgement: the only rule that people were happy to adhere to was 'no diet talk'.

Now that Young has the ball rolling, all we can do is hope that more people feel inspired enough to champion movements like this so that diet-culture in its entirety is stamped out and replaced by something people need to feel as good as they are. 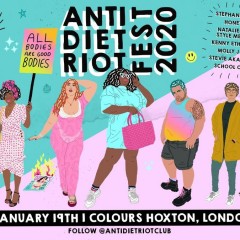 Out of the fiery ashes of our societies outdated diet culture obsession, The Anti Diet Riot festival was born.