There is a lot of preconceived notions of what Edinburgh Fringe is and isn’t! I’m here to put some of those ideas to bed.

This year I reviewed and attended Edinburgh Fringe for the very first time. Not only was it the first time I attended the festival, but it was also my first time in Edinburgh and my first visit to Scotland. Before I left to commence my travels and enjoy fulfilling part of my creative bucket list, I was given advice and prompts by my friends, family and associates. I googled information about where I was heading, researched all about it, scoured social media and read other writers’ reviews for past years. It turns out, some of this advice and tips lived up to my own experience, whilst other pieces of guidance didn’t exactly match up to my own observations and encounters.

Below I attempt to separate the myths from the actuality, based entirely on my own visit to Edinburgh Fringe last summer.

Everyone I spoke to; friends, colleagues, strangers in the queues told me that whatever I did I really mustn’t sit on the front row. I was guaranteed to get picked on, volunteered up by a comedian and unwillingly dragged into the show.

Due to my hearing impairment and being registered as deaf/hard of hearing, I sat in the front row or near the front in most shows in order to hear. I did not get picked on or involuntary approached by comedians, actors or performers once.

Instead I could fully hear and appreciate the performance, whereas if I’d sat further back I may as well have not have been in the show at all if I couldn’t hear or see what was happening.

Busted: I can’t guarantee you’ll be safe in every show, I saw dozens and wasn’t picked on.

2. You won’t meet any Scottish people, despite being in Edinburgh

Again, I was told this by family, friends and strangers. It might have been something about my excitement for my first trip to Scotland or experiencing Scottish culture, that people were worried I’d be disappointed that I wouldn’t experience authentic Scottish experiences or indeed meet native Scottish people. Perhaps they were explaining that Fringe is a melting pot of all different cultures, nationalities and wonderfully diverse peoples.

Yet I found myself talking to so many Scottish people, and friendly locals who had popped down to see two or three shows. They advised me on places to visit, things to see, times of the year to visit. They shared their year-in year-out experiences of the fringe and the impact of local culture.

I also met some disgruntled Scottish people, upset at the disruption to their local norm caused by the fringe. Mostly I met welcoming and friendly Scottish locals, happy to give me advice and tell me more about Edinburgh and Scotland.

Busted: The Scottish are present, pleasant, and almost always willing to help.

Edinburgh Fringe is a comedy festival but it’s also so much more. I did watch a lot of comedy but I also saw a huge variety of different art-forms, from music and cabaret to dance and even circus. There was spoken word, rap and theatre. Emotive dramas to hilarious stand up. There was something for everyone whatever you are most interested in.

Busted: It’s not called the largest arts festival in the world for nothing.

4. Edinburgh fringe is an arts bubble

I’ve seen this written a lot by other publications or spoken by people who work in the creative industries or theatre makers. It is great to meet and network with other creative people and for theatre makers and writers to get their work out there.

But it also attracts a lot of visitors that make up the general public. Local people and people who’ve travelled for a nights entertainment and to see a couple shows. Whilst it is best to spend a week or so to properly take in the fringe and see a variety of shows, most people I met and spoke to had popped along for a day or two to see two to three shows. You could spot who was a reviewer or a journalist by the number of shows they have said they had seen.

Busted: The Fringe caters for everyone, and you’ll meet industry experts as well as complete Fringe virgins while there.

5. You won’t see much of ‘real’ Edinburgh

In some respects this is true as with so many shows to see and so much entertainment to occupy us it leaves little time or focus upon Edinburgh’s more traditional usual tourist traps.

Saying this, I certainly got to explore most of Edinburgh, as the venues were spread across the city over the days which gave me the chance to see the streets as I moved between shows.

Busted: Edinburgh might be wrapped up in a big layer of Festival glitz, but you can definitely see the beautiful city if you look 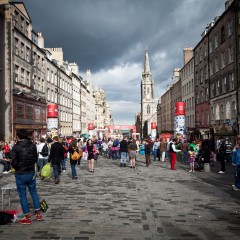 There is a lot of preconceived notions of what Edinburgh Fringe is and isn’t! I’m here to put some of those ideas to bed.