The young lady of such global importance we’re starting to call her by her last name only.

I was slowly browsing through the Apple News app Tuesday evening, observing with the usual mixture of amusement and despair at Brexit and the continued inaction over the climate crisis, when I noticed something that – had I a cup less coffee that evening – I would have easily missed. The name Thunberg. Not the name itself – Greta Thunberg needs no introduction I am sure – but instead the way it was shown on the article I was reading. The surname, with nothing before it.

Children, teenagers, and young adults in the media are usually referred to by their first names. This seems intuitive, since referring to someone by their last name alone is usually reserved for people to whom the reader is perhaps expected to acknowledge as respectable - politicians (pffft), academics, prominent sportspeople, etc. - and even young people being celebrated for something or other within the news are rarely credited with that level of gravitas.

Yet the more recent articles I looked at involving Greta Thunberg over the last week or so the more I noticed the pattern. The Guardian, Rolling Stone, CBS, Vox, CNN, Vanity Fair, all manner of publications from all manner of target demographics and political alignments refer to the climate activist at some point in their articles as “Thunberg”, as if referring to someone of the social status as one of the examples above; or at the very least, as if she were an adult. Which of course, she’s not. She’s 16.

It might seem like a trivial matter of writing style but this was the moment that the significance of what Thunberg (and yes I am going to follow suit and refer to her in this way, because I believe she commands and deserves such respect) has achieved truly struck me. Not necessarily for the climate change issue in isolation but more generally. She has made the media take her and her cause seriously, and treat her like an adult. Something that young people the world over have been desperately struggling to do, and the reason publications like Voice exist in the first place.

It is of course easy to see why Thunberg has commanded such respect. You only have to watch her speak – with fury, passion, and desperation audible in her voice that is difficult to fake, and is so often absent from the bland, blank delivery of our politicians – to feel in awe. She is a powerful rhetoricist. She’s also far from an armchair activist, having started the schools’ climate strike movement almost single-handedly in 2018, to crossing the atlantic over 2 weeks in a sailboat. She is formidable, and most significantly I think, none of those statements need qualifying with the phrase “...for a girl her age”. She is just impressive, and her age - as evidenced I think in the way the media is addressing her - has become a non-factor.
This is the crux of what I think we, as young people in the arts, need to take away from this. We have grown up constantly hearing the broken record: “you are the future”. But this, if it were ever true, no longer is accurate.

We are not the future, because we have to be the now.

“You all come to us young people for hope! How dare you!?” - Thunberg at the UN Climate Action Summit

Thunberg’s anger about the inaction over climate change is something I have seen mirrored in people my age and younger about all manner of issues: politics, education, social justice. For me personally, I find the thing that stirs up that manner of deep frustration is music education - or moreover: the lack thereof in our schools. What we all need to realise is that we have to stop being inspired by Thunberg – she herself has said that is exactly what she doesn’t want – we need to start being her, each in our respective fields. Voices that can champion the causes we are passionate about and can force the people that can make change – by sheer force of conviction – to listen.

"Don't invite us here to tell us how inspiring we are without doing anything about it, because it doesn't lead to anything." - Thunberg to the Senate Climate Change Task Force

If we can get to the point where we can command the respect where our opinions don’t need to be validated by our age, we might just get somewhere. 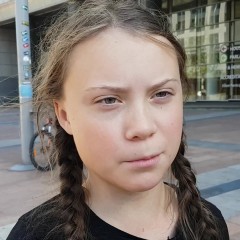 The young lady of such global importance we’re starting to call her by her last name only.