16-year-old rising talent Allegra has been the star of a recent remake of Taylor Swift’s hit single ‘Lover’. The singer-songwriter had been featured in internet influencer Kurt Hugo Schneider’s YouTube video.

Schneider, a talented producer and musician often uploads content to his YouTube channel, which has garnered over a staggering 12 million subscribers. In his latest musical series, it sees Kurt making chart-topping tracks from scratch without having heard them before. Recently remaking Taylor Swift’s title track, taken from her latest album ‘Lover’ the video currently sits at a comfortable half a million views and counting.

Allegra’s role in the viral video does not do unnoticed by any means. Offering up some serious vocal work and persona, playing up to the camera like a true professional.

For Allegra, this video feature is just another step in a prospering career for this young singer. Having already released ‘All About Us’, which has already hit the big time across Music Week’s charts, the next steps for Allegra are looking increasingly more exciting. 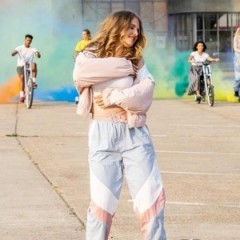 16-year-old rising talent Allegra has been the star of a recent remake of Taylor Swift’s hit single ‘Lover’. The singer-songwriter had been featured in internet influencer Kurt Hugo Schneider’s YouTube video.