Articles by both the Times and MailOnline last week (I won't link to them) have caused an eruption on the internet as they ‘exposed’ how the RNLI has sent millions of pounds to projects overseas, including funding burkinis and child creches in Bangladesh. The drama comes at a time when the RNLI are facing what it describes as a “perfect storm” of a funding gap, and as a result will cut 95 permanent jobs.

The torrent of angry comments was immediate, with people seemingly outraged that the RNLI would dare spend money saving non-British people from drowning.

“It’s unacceptable. We do not donate for this. You’re not an overseas organisation. You’re British, Royal and National, it’s in your title. Proud to sponsor the medieval, male, patriarchal garb of the hijab and burkini? Women are dying when they take off their hijabs in Iran” - @janice4brexit

“So your international work will cost British jobs and lives this is not why I donate to the @RNLI  The brave men on those lifeboats must be kept in their jobs so I suggest reducing the payment to those at the top and abroad.” - @JustHereRightN2

“Sorry, but there’s a clue in the title. Royal NATIONAL Lifeboat Institution. I sponsor it to rescue people in distress in NATIONAL waters. There are plenty if other charities who provide overseas assistance. Stop virtue signalling and have a rethink please.” - @sailaway999

Among many of the comments I saw there were a number of recurring themes. You have people like @Sailaway999, who felt that British money should be spent on British lives, those like @Janice4brexit, who didn’t read any of the RNLI reports on their overseas work, and then people like @JustHereRightN2, who appear to lack an understanding of how the RNLI operates, or any awareness that the majority of people on the lifeboats are volunteers.

The RNLI wrote a blogpost in response to the reports, detailing how less than 2% of all annual expenditure is spent on international drowning prevention activity, and they actively seek donations specifically for that work. 2%. To crudely simplify it, 2p out of every pound that you have donated to the RNLI has been spent abroad. Third Sector reports that the average donation to the RNLI was £8.39, meaning a whopping 17p is spent on their international endeavours. Imagine being so upset about 17p that you take £8.22 away from saving the very British lives you place so such a high value on. Doesn’t that sound absolutely insane?

The post also specifically addressed the burkini funding. They explained that the Panje Project teaches women in Zanzibar swim survival skills, and by providing burkinis they are able to get women in the water without compromising their cultural and religious beliefs. The majority of the RNLI’s involvement in the project was funded by a donor who specifically requested the money go towards the project.

More to the point, the RNLI have always been open about their international efforts. It is in their annual reports, and can be read on the charity commission website. It is also referenced throughout the website. To say you were misled is to only admit that you didn’t properly research what you were supporting anyway… Although there’s a lot of that about nowadays.
The founder of the RNLI, Sir William Hilary, even said that their efforts should extend beyond ‘our own immediate coasts, to the most remote quarters of the globe, and to every neighbouring state.’ This work is delivering a vision embedded in the DNA of the charity.

And why shouldn’t the RNLI help prevent drowning across the world? They are experts in life-saving, and to export simple and often inexpensive (again, 2p in every pound) solutions to other areas of the world should make British citizens proud. It is literally the whole point of charity to help others less fortunate than yourselves. 40 children a day die from drowning in Bangladesh. Access to a creche reduces the risk of drowning by 82%, which is a remarkable statistic, and the fact that in partnership with the Centre for Injury Prevention and Research Bangladesh the RNLI have managed to fund 10,000 creche places is a cause for celebration, not anger.

Sadly, this is just another example of how insular, myopic and outright racist attitudes are now being the norm within the UK. Our ideas for a Britain that exports across the globe apparently don’t include exporting compassion. Rather than celebrate how with just 2% of their expenditure, a great British charity is able to play a part drastically reduce water mortality rates across the world, people snarl that it’s not all being spent saving British people, crying foul at the loss of jobs that were volunteer posts in the first place. It’s a true tragedy to see these opinions get aired so publicly and brazenly, and I’m glad to see the RNLI push back against the unwarranted criticism.

I am also proud to see so many people supporting the RNLI in light of this ‘controversy’, with many pledging to set up direct debits to support the work they do both nationally and internationally.

If you would like to donate to the RNLI, then you can find details on how to do so on their website: https://rnli.org/ 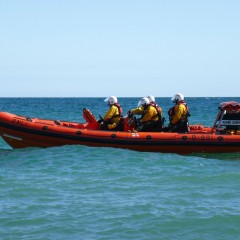