How can you travel three metres and lose an hour? Time zones are a peculiar concept, but somehow it wasn’t the strangest transition I experienced in those three metres.

On the way back from a trip to Ukraine, we crossed the border into Hungary, moving from geographic Europe to the political Europe of the EU. But by driving over those three metres that the border consisted of, we may as well have flown into a new continent. Unlike the open borders, recognisable architecture and similar cultures of the neighbouring European Union countries, Ukraine maintains a unique and differentiated society, which separates it culturally from its surrounding countries.

“We now in Hungary so seatbelts on” announced our driver in broken English. All of a sudden my phone pinged with a message welcoming me into the EU zone, the pot-holed roads were exchanged for smooth tarmac and recognisable signage, and we jumped forwards an hour in time. How was it possible that a few metres of travel could make such a difference?

We live in an age of jet-fuelled holidays, happy to skim over cultural and geographical differences from above. But when you travel by land, the cross-country changes which define political and economic circumstances are far more noticeable. And when I saw such a distinct cultural shift occur before my eyes, I truly appreciated how arbitrary geographic borders are, and yet how much power they yield.

Such a defined border could be analysed to show the remaining legacy of the Iron Curtain in Europe, as well as the tangible impact of EU policy on its member states. While staying in Ukraine I could certainly detect Soviet influences surviving, while the country’s strong Orthodox religion also makes it stand out from the EU trend of increasing secularism. The border could have been placed anywhere, and yet this man-made concept of divided land redefined the lives of citizens on either side. This was not a border that could be crossed daily. This was a high security border, a hostile border, a border to keep certain people out and other people in - without a grey area between.

Health and safety in Ukraine is based more on common sense than legislation, or so it would appear to a British tourist. In my time volunteering as a camp leader there, I learned that children’s safety is of just as much importance as it is to us here, but it is approached through individual judgement and not sweeping legislation. It could be considered pure luck that nothing went seriously wrong during my trip there, but I had a fabulous time pushing friends into the pool, sitting in the footwell during car journeys, and making the most of the lack of seatbelts. As I said to my parents upon return, “As a Generation Z baby that’s kind of what I imagine the 70s were like!”.

This freedom certainly added to my enjoyment of the trip, and made me question to what extent our current strict health and safety laws are necessary. When we crossed into Hungary, all the EU legislation I unquestioningly follow at home suddenly seemed overly restrictive and futile. And against rational judgement, I found myself questioning why we need seatbelts in England, where the roads are smooth and the driving regulated, when we were fine without them in Ukraine, where the roads are littered with potholes and the drivers use their phones on the job? I would never normally see the matter of seatbelts in such a dismissive light, but the liberating nature of the trip pushed my thoughts in strange directions. Of course the legislation is meant to reduce liability as much as anything else, and it decreases the rate of fatal accidents significantly, but you can’t help but compare it to Ukrainian laws when you see the stark contrast across the border.

Crossing the border helped me reflect on the differences, not just between countries and cultures, but also on our own advancements as a society, and how our priorities have shifted. Therefore, the best experience I gained on my trip was not received during my time in Ukraine, but rather while leaving it – transitioning from one culture to another so sharply. So if you ever desire to analyse the country-based differences across Europe, don’t go to visit one - simply visit their borders! 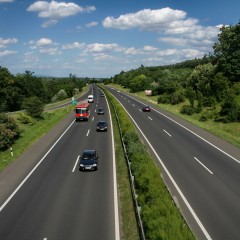 How can you travel three metres and lose an hour? Time zones are a peculiar concept, but somehow it wasn’t the strangest transition I experienced in those three metres.