Comedians often talk about being censored, but how much is it actually happening?

As you can see from our Voicebox, I was recently at the Edinburgh Fringe Festival, and there was one word that many comedians kept bringing up: censorship.

This is by no means exclusive to the Fringe, with comedians like Andrew Doyle (former writer for Jonathan Pie) frequently claiming that audiences have become far too sensitive. Debates like these can also be seen in wider society, with figures like Paul Joseph Watson and Jordan Peterson rallying against so-called political correctness – Peterson is even beta-testing a ‘censorship-free’ alternative to Patreon.

To begin to talk about this, it’s probably useful to get an understanding of what censorship actually is. Censorship can broadly be considered to be the suppression of particular ideas and the people who put these ideas forward, usually when these ideas are politically challenging for an authoritarian government. Russia and China have both been accused of censorship, although historically many countries have engaged in censorship, including the USA and the UK.

Even at this first hurdle, the comedian’s complaints of censorship fall flat on their faces. You cannot simultaneously be censored and frequently being given space in various large comedy venues and platforms to complain about being censored. An audience reacting badly to ‘offensive comedy’, or taking to social media to complain about these jokes, cannot be said to be equal to censorship. Many of the complaints of comedians feel more like issues with audience reception of jokes, rather than there being a concentrated effort to censor by a larger power.

Furthermore, the consequences for being socially transgressive in comedy seem minimal for those in positions of privilege, many of whom are the same people talking about this censorship. This is most glaring in the case of Louis C.K – the notoriously boundary-pushing comic who openly admitted to extensive sexual misconduct – returning to comedy within a year of the accusations being made public. There are so few people being actively prevented from performing that to claim that there is a sweeping trend towards censorship is patently false.

Late in 2018, Konstantin Kisin refused to perform at a UNICEF event at SOAS University of London after he was asked to sign a ‘behavioural agreement’ before his set. This agreement gave a list of banned items - "racism, sexism, classism, ageism, ableism, homophobia, biphobia, transphobia, xenophobia, Islamophobia or anti-religion or anti-atheism". Whilst this list may initially seem limiting, the agreement also said "It does not mean that these topics cannot be discussed. But it must be done in a respectful and non-abusive way." In other words, all that was really required of him was to refrain from making bigoted jokes, and yet this was held up as being reflective of universities being “places of indoctrination”.This sentiment is by no means unique to Kisin, with Chris Rock and Jerry Seinfeld also stating that university campuses are too PC for them to perform at.

In so many of these cases, while the conversation is framed as freedom of speech issue, they’re actually about the right to be cruel without consequence. As a comedian, an audience is under no obligation to like your comedy, especially if it unnecessarily punches down at particular audience members. Also, whilst you have the right to say whatever you want (with some notable exceptions), you do not have a right to be given a platform by comedy clubs, or universities, or anywhere else for that matter.

More often than not, these cries of censorship seem to come from the entitlement of comedians who refuse to change with the times, rather than genuine concern over freedom of speech. Many of these comedians that constantly try to convince us that their shows are controversial and boundary-pushing tend to be uninteresting, because they tend to be lazy jokes that use people’s identities as punchlines. Frustratingly, these cries often distract from true censorship, like when the Saudi Arabian government pressured Netflix into removing an episode of Hasan Minhaj’s special (in Saudi Arabia) because he criticised the nation and the Crown Prince. Netflix bowing to the pressure of a government attempting to sanitise its own image is far more dangerous than a comedian being asked to refrain from mocking disabled people onstage.

Censorship remains is a hot topic amongst a certain brand of comedian, but the reality is much more mundane. We’re no longer living in the 90s, people have generally moved on from comedy where marginalised people are the punchline, and these comics need to acknowledge that. 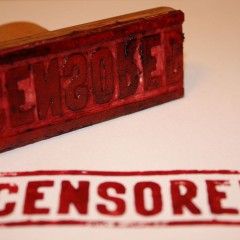 Are comedians actually being censored?

Comedians often talk about being censored, but how much is it actually happening?