British band, The 1975 collab with climate activist Greta Thunberg on a re-work of their self titled track ‘The 1975’.

As Iceland mourns the loss of its first glacier and scientist's data tells us that the ice melts in Greenland shouldn't have happened naturally until at least 2070, it's difficult to imagine a future that doesn't involve the extinction of life on earth as we know it.

With the near continuous heat waves in the UK this summer, it might feel lovely to be able to spend days in our gardens feeling like we’re on holiday, but The 1975 and Greta Thunberg are here to remind us that in reality the real picture isn’t so lovely. It’s an emergency.

Throughout history, perhaps what has defined us homo-sapiens as a species is not only our ability to adapt to our surroundings and their boundaries, but to push and stretch them as far as possible, with little to no care about the future impacts these developments and discoveries will have. More recently I’ve been wondering if as a species, we’ve taken this one step too far.

So many people ask me, ‘what’s next’. So many essays I’ve written in my short life, whether on complex international politics as I studied Geography at A-Level or on music industry at uni have all been at their core about what the future will look like. To sum up all of these essays in five words: ‘Currently there is no future’.

Through those days scribbling down essays, my time at school was soundtracked by British band ‘The 1975’ and I couldn’t tell you how many times I wrote out chemistry equations while listening to Matty Healy sing about blowjobs in their self titled song ‘The 1975’. So when they re-released the track again as an intro into their upcoming album Notes on a Conditional Form the same day Boris Johnson was elected to be prime minister by 0.14% of the UK, I wasn’t quite expecting a speech penned by Greta Thunberg instead of the old familiar lyrics, never mind the fact that all the song’s revenue is being donated to climate change prevention organisations.

This is a change I find welcoming.

Far too many extended family friends never fail to let me know about how disapproving they are of the protests Extinction Rebellion and Greenpeace have been organising and how they ‘hope I’m not one of those deluded teenagers that think standing on a London bridge will do anything’.

As Thunberg states, “You say that nothing in life is black or white but that is a lie, a very dangerous lie. Either we avoid a warming of 1.5 degrees or we don’t. Either we survive or we don’t.”

If, like me, you want to die because of old age instead of climate change then please check out The 1975’s track, the campaigning that Greta involves herself in as well as the work of Extinction Rebellion and Greenpeace. 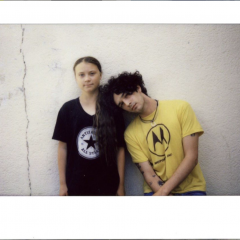 British band, The 1975 collab with climate activist Greta Thunberg on a re-work of their self titled track ‘The 1975’.