Voice MagBlogsAnd where am I?!

Disability representation in the arts could and should be better

In our increasingly inclusive society, debates over representation are finally beginning to be brought to light. However, there is one particular marginalised group whose plight of misrepresentation needs particular attention. A new report named ‘Road Map for Inclusion’ highlights how few disabled people are being properly represented in the arts and media.

Only 2.7 percent of characters in the 100 highest-earning movies of 2016 were depicted with a disability, according to a 2017 report from the University of Southern California’s Annenberg School for Communication and Journalism. (https://annenberg.usc.edu/sites/default/files/Dr_Stacy_L_Smith-Inequality_in_900_Popular_Films.pdf) What’s more, among regular characters on primetime TV, only 2.1 percent had disabilities, according to a report from the rights group GLAAD.

With these statistics in mind, the new report calls for drastic change. It aims that 1 in 4 roles “both in front of and behind the camera” are held by someone with a disability― which would match the 1 in 4 adults in the U.S. who live with a disability (per the Centers for Disease Control and Prevention).

Judith Heumann, disabled rights activist and lead author of the report, publicly discussed the importance of proper representation - especially for young people. She erred the entertainment industry to include both those with ‘visible disabilities’ (such as amputations, blindness or muscle dystrophy) and those with ‘invisible disabilities’ (such as epilepsy or cystic fibrosis) in on-screen and off-screen positions.

“People need to see themselves. People with disabilities, like any other group ― when you don’t see yourself, you feel invisible,” said Heumann. “The [entertainment] industry needs to say we have not been doing a good job, we need to do more.”

Across the globe, people with disabilities are negatively and disproportionately represented amongst the lower classes as well. Because of economic and social exclusion, which often makes accessibility difficult, the challenges that people with disabilities face can be immense. The poor media representation of this demographic therefore not only adds to the struggles of this group, but also intensifies the stigma which surrounds them.

What’s more, even when the characters do have disabilities, they are often portrayed by actors who do not. Among disabled characters in the top 10 TV shows of March 2016, only 4.8 percent were played by actors who had that disability in real life, according to a Ruderman Family Foundation report.

For example, the popular 2016 film “Me Before You” employed a non-disabled actor to be a character who was quadriplegic. The film also received serious backlash as the plot centres on a character seeking an assisted suicide ― as if suggesting that life with a disability is not worth living.

The outrage culminated in a Twitter hashtag of #mebeforeeuthanasia - a proud demonstration of the strength of this community and their determination to be accepted by society.

However, that is not to say that progress is non-existent. For example, in 2017 the children’s beloved classic, “Sesame Street”, introduced a puppet with autism. This is also reflected in programmes aimed at adults, such as “Emmerdale”, which featured James More - an actor with cerebral palsy.

These advancements may suggest that misrepresentation thus lies in the classics - stereotypes and harmful tropes which cannot be erased from the public’s memory. Villains such as the Joker often have facial disfigurements, as if malformations signify evil. There are also unintentionally damaging character traits which misconstrue public perspectives on people with disabilities - such as ‘Forrest Gump’ or ‘Raymond’ from “Rain Man” - who may tempt audiences to stereotype all learning disabilities as such as these.

On the other hand, more and more actors with disabilities are taking a stand and speaking out against these injustices. Public figures such as Ali Stoker, the first disabled actress on Broadway, and Jamie Brewer, from “American Horror Story”, are proving to the media that their voices deserve to be heard. By Brewer playing such a strong and determined character, whose disability is hardly mentioned, she is taking great strides in increasing the respect for disabled actors in the industry.

By removing the stigma around this topic via proper representation, the media can directly impact the public and social perspective of people with disabilities. Hopefully, soon a disability on-screen will not be a spectacle or a defining character trait, but instead a common appearance - a mere representation of our social demographic. As one disabled journalist from the FLARE Children and Young People’s Group wrote, “I am not a villain. I am not a hero. I am just me.” 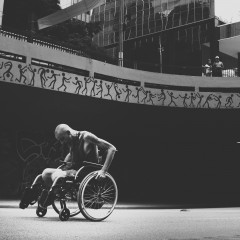 Disability representation in the arts could and should be better