Voice MagBlogs‘I have a Fitbit in…

Francesca Forristal writes about her struggle with eating disorders, the recovery from which forms the basis of her new show, Oddball.

Any trip down the tube this month is a perplexing affair. (No, I’m not talking about the suffocating heat, thought that sucks too.) Gazing across the platform, one is met with a huge billboard screaming ‘Obesity causes cancer.’ Beware. Beside it, a Fitbit advert promises more control over your life… *cough* I mean, your weight.

The message? Overeating is like… smoking? Calorie control is saintly. Cool.

To a person in recovery from an eating disorder, both adverts fill me with despair for our society’s current definitions of ‘normal’ or ‘healthy’ eating. I have a Fitbit too, but you can’t see it. It’s sort of, inextricably lodged in my brain, and it never needs recharging. I can tell you the calories of every item of food or drink I come across. I can even distinguish caloric content between brands. Let me tell you, Heinz Baked Beans v.s. Sainsbury’s Own Brand… there’s a serious difference.

The weird thing is that, for ten years, nurses in inpatient wards and psychotherapists called my internalised Fitbit an ‘eating disorder’ – mostly ‘anorexia nervosa.’ Couldn’t look at anything without knowing the exact nutritional content. Still can’t. Makes any food decision a number game. Sometimes when I was more normal looking, they called it ‘EDNOS’, or ‘Bulimia,’ but hey, who’s counting?

(Me, I’m counting, everything, all the time.)

I’m recovered, don’t worry guys. Mostly. Though I’m not really sure what that means anymore… In TV series, it’s simple. A skinny, manic pixie dream girl stops eating, and at about 50 mins in, she nearly dies, and has therefore ‘earnt’ her recovery. How do we know she’s fine now? Well, she’s tucking into a really big sandwich. Bless her.

But – as I try to explore in my new show ‘Oddball’ (Upstairs at the Gatehouse, 20th-24th of August, @oddball_show) – the messy highs and lows of ‘recovery’ continued way beyond the five “tragic low points” in my own ‘recovery’ narrative arc. Seriously, no one from the BBC would ever commission my life as a movie, cos it would be all over the place. Not satisfying at all.

Just in case you are reading this BBC, I’m still open to ideas, I didn’t mean any of that, please pay me to write for you. Okay thanks.

I must state the obvious, for it is not always obvious. Eating disorders are exactly what they say on the tin: ‘disordered eating’. Anorexics do eat. (If they didn’t, they’d be dead in a week, duh.) Rather, at their core, eating disorders are when food, and macros, and exercise, and numbers, and weights take up a disproportionate part of your brain that could be better spent on anything else. Work. Sex. Watching paint dry. I don’t know what you do with your time, Brenda, okay? But food shouldn’t be taking up 20 hours of your thought processes, and it shouldn’t be influencing where you go, or what you do, every step of the way. And for me, for about ten years, it did. Still does. Sometimes.

But that’s recovery for you. Sometimes it’s good. You’ll have a day where you only think about food when you’re hungry, or when something is particularly delicious. Other times, your entire day is spent totting up numbers and weights and hours on the clock, fending off the ravenous guilt wolves which gnaw at your brain for not having more “self control” or whatever. Good and bad days.

Today, in this five-billion-trillion-thousand degree tube heat, it feels like a bad day. I look around the wrists of endless commuters squished beside me on the Victoria line, and I see that every other person has some kind of smart, Fitbit thing. Someone is talking about how many steps they have to do before they eat dinner. Next to me, someone boasts that they have burned exactly twice as many calories as they have consumed today: “It’s so addictive.”

I can’t help but feel a bit jealous.

Think of a person in recovery as a recovering alcoholic, or a recovering addict. Less Girl Interrupted. More… Trainspotting. See? Much cooler. Like with any addiction, each day is an opportunity to stay strong or screw up; every day is an active decision as to whether you are going to be honest with yourself, or give in to that fuzzy, all consuming (pun intended) ‘hit’ that comes as a result of practicing behaviours which you know will make everything else feel okay. Inconsequential. Easy.

Anorexics, people with BED (‘binge eating disorder’), or Bulimia, or Orthorexia (obsessive relationship with “health food” and exercise addiction) or EDNOS (‘eating disorder not specified’, which – by the way – is a RUBBISH name thank you very much doctors. Do better.)… We are all more similar than you’d think. It’s why the Obesity ads next to Fitbit ads are so incongruous. ‘Disordered eating’ allows you to transfer those feelings of helplessness, a lack of control, on to something eminently controllable: Food. And our relationships to food – whether it’s being able to eat and throw up, and the endorphins that brings with it, or fast until you can’t think about anything else – these relationships are built on that addiction to making the rest of the world go away. My mission, therefore, as a very cool recovering addict, is to engage with life, regardless.

Before @clean_foodie_raw_till_4_goddess comes for me in the comments, I’m not saying that every single person who owns a Fitbit is practicing some kind of societally normalised strain of eating disorder. Smart technology and apps are a really great way for some people to circumvent a lack of nutritional education and develop an understanding of how one can lose weight in a measured, healthy way. The entire way society approaches diet and weight is plagued with classism, and privileges those who have the financial liberty to buy gym memberships, weight loss tech, etc. Usually, it comes down to the question of, “did you have a nice middle-class mother cooking kale, or did your parents have to make do with feeding a family from a freezer?” So no, Cancer Research UK, your Obesity adverts are not okay.

By drawing these comparisons, I am instead trying to illustrate the spectrum upon which eating disorders sit. These addictions have a function like any other. You’ve all come home after a hard day at work and had a glass of wine. Well this? This was my glass of wine. Still is sometimes. But ultimately, no matter how jealous I am of the blissful certainty and precision you can get from a Fitbit, I know that each year ‘clean’-ish will get easier. Eating disorders are a formidable habit. But engaging with life, fully, is so much more addictive.

Liked this article? Check out Forristal’s new comedy, ‘Oddball’ at Upstairs at the Gatehouse, 20th-24th of August, at www.forristal.co.uk/upcoming-shows. 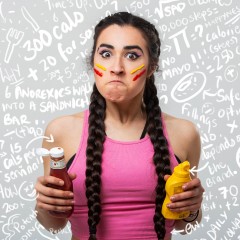 ‘I have a Fitbit in my brain too, and it never needs recharging’

Francesca Forristal writes about her struggle with eating disorders, the recovery from which forms the basis of her new show, Oddball.