Nicole Maines is as much a superhero in real life as she is on screen. She is currently starring in Supergirl, but Maines’ own story and personality is as endearing and thought-provoking as the plot and issues her character faces in this TV show.

Nicole is currently starring in CW’s Supergirl as Nia Nal aka Dreamer. In the show she is an alien that becomes a superhero, whose powers include (but aren’t limited to) being able to dream the future and act upon the signs and messages she receives, thereby outmaneuvering her enemies and being able to influence the future positively and informedly. Nia Nal is kind, compassionate and relatable, not to mention powerful and badass. She develops strong and reliable friendships with the rest of the characters, including her blossoming romance with Brainy, a fellow alien who uses calculus to predict his oppressors attack. Dreamer and Supergirl are changing the world, and not just by fighting with their fists. Their main power is being Nia and Kara, writers of hard-hitting and truth-bearing journalism, fighting against political propaganda, xenophobia, hatred and racism in order to protect and speak up for everyone.

The show uses aliens to represent the masses of minorities that are currently being hurt by global acts of oppression and prejudice, and highlights the scapegoating by the general public, governments and presidents around the world. It is particularly commenting upon Trump, Brexit, the refugee crises and LGBTQ persecution, amongst other issues. It’s using its platform as a television series to take a stand, to show that everybody is important, and to call out the haters, the laws that are unjust and the contradictory and unstable political period we are currently in. It promotes peace, acceptance and understanding. It makes the effort to ensure that everyone is represented.

Nicole herself is transgender but Nia Nal, the character she plays, also comes out as transgender within the TV show – an unprecedented act whereby she is the first transgender superhero in a huge TV show franchise. The scenes are heartfelt and powerful, providing a much-needed role model and a positive step forward for transgender representation on television.

This isn’t the biggest way Nicole Maines has made history though, and it’s not the first time that Maines has made an unprecedented breakthrough in challenging societal prejudice and calling for equality. She has experience in making a stand and doing what’s right even if it’s tough – a real-life superhero as brave as her on-screen superhero alias.

Whilst Maines was at elementary school, the grandfather of one of her classmates complained about Maines using the girls toilets facilities. The school acted upon this complaint and rather than stand by Maines’ human right to use the toilets of her gender, instead barred her from using the girls bathroom altogether, insisting she use the staff toilets, and therefore singling her out from all her other peers.

Maines and her family sued the school in 2007, pointing out how discriminative the school was being against her and highlighting the prejudice against a young person. In 2014, Maines won the case and it was ruled that the school had violated the human rights act. They were now unable to prohibit transgender students access to the bathroom of their gender identity.

This made headlines across the world and helped raise awareness of transgender issues. It highlighted a problem faced everyday by transgender individuals anywhere in the public domain.

Up until this point, there was no actual ruling protecting transgender people’s right to use the bathroom of their gender. It meant that discrimination and prejudice often went unchecked, and that it was difficult for individuals to even use a public bathroom or to fight against authorities telling them they couldn’t use it. This ruling for Maines was paving a way for a better future, not just for herself but for LGBTQ people, human rights and equality everywhere. There’s still a way to go, but if history tells us anything it’s that making a stand like this is what starts the ball rolling.

I met and chatted to Nicole a couple of weeks ago and not only is she inspiring but she is bubbly, up for a laugh and lots of fun to be around (oh, and loves blueberry-topped pancakes). She doesn’t take herself too seriously and yet is passionately serious about what she believes in and what is right.

She revealed recently that the enormity of the case that she fought still hasn’t sunk in, that it feels like another person did and experienced that, and mentally she still can’t comprehend that it happened. It’s her past and yet it was so big that she’s almost hidden it from her mind. It seems like she just knew she needed to fight it, and it was a matter of doing what was necessary and right rather than what was easy. She was studying game design at college but instead switched and is now an actor in a huge TV show. She has just starred in the vampire movie Bit which again raises the issues that exist in society against gender and identity.

She might now be playing a superhero on screen but she is one-hundred percent a superhero in real life too. 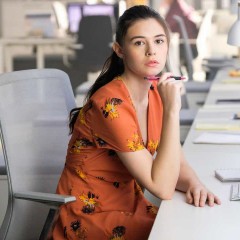 Nicole Maines is as much a superhero in real life as she is on screen. She is currently starring in Supergirl, but Maines’ own story and personality is as endearing and thought-provoking as the plot and issues her character faces in this TV show.