Monae used to be an android. She then shed her protective shell, and in doing so became a role model for millions.

Representation of the LGBTQ+ community in pop culture has come quite far recently. While the fight is far from over, with so much injustice yet to be solved, more and more queer artists have been in the spotlight. Mainstream movies like ‘Love, Simon’ and ‘Rocketman’ are starting to fill the absence of queer makers and creators in mainstream media. There are many outstanding queer artists that I could write about, such as Frank Ocean, Troye Sivan and Sia but I am writing about one of my very own idols - Janelle Monáe.

A little bit of background; Janelle Monáe is a Grammy-nominated musician, actor, and activist. She is the CEO of her own label and a movie star, appearing in the Oscar-winning Moonlight and the Oscar-nominated Hidden Figures. Janelle also started a movement called Fem the Future which is dedicated to advancing awareness and opportunities for women through music, arts, mentorship, and education.

She started in the music industry by releasing a demo album in 2003 and in 2010 released her first studio album ‘The ArchAndroid’. During this part of her career, Janelle hid behind an adopted persona of an android, fearing the judgement of others - something so many queer fans can relate to. Later, in 2018, Janelle released the concept album ‘Dirty Computer’, along with a short story film of the same name. I discovered Janelle in early 2018 and fell in love with the joyful energy and funk vibe of her single ‘Make Me Feel’.

Then, I listened to ‘Dirty Computer’ and it blew me away. It was youthful and powerful and full of so much hope. ’Dirty Computer’ embraces everyone - whether they’re young girls, young boys, non-binary, gay, straight, queer, different or just struggling to figure out who they are. Anthem after anthem, it showcases how unapologetic Janelle is being a queer black woman in America. The narrative quality of the album makes it all the more special and the lyrical stories told and unforgettable. One of the main issues was a plea for a more inclusive and accepting society.

Janelle came out as pansexual in an interview with Rolling Stone magazine in April 2018. The LGBTQ community already had a love for her music, so when she came out as pansexual she gained a role model status as a popular, out and proud, queer, black, musician. Abandoning her protective android ‘shell’ made activism easier and meant that she could really connect with her fans. After attending a Pride parade for the first time, she mentioned that “The most beautiful thing was seeing so many moms and parents with their kids. “ Janelle told the story of one mum who said “Thank you for your album, for walking your truth. My daughter doesn’t feel so alone.” Allowing people to share their stories about being their true self truly does help others to feel less alone and that is why Janelle is such a big inspiration to me.

Janelle’s music has been heavily inspired Prince, Janet Jackson, David Bowie and Stevie Wonder. And just as they shaped and influenced her work, Janelle will continue to guide my work. I want to thank her for inspiring her thousands of fans by embracing and being unafraid of who she is. 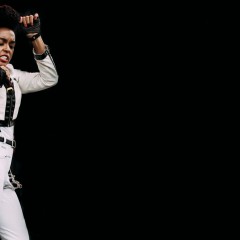 Monae used to be an android. She then shed her protective shell, and in doing so became a role model for millions.