Voice MagBlogs'I will not be…

This pride month we're celebrating the 50th anniversary since Stonewall by showing a spotlight on queer figures that we find inspirational...here's a snap shot at the incredible work Halsey does to advocate for LGBTQ+ rights around the globe.

For me, Halsey represents our theme of ‘Equality’ to an absolute ‘T’. As an American musician, she’s used her own experiences of being bi-racial, bi-sexual and a woman in recent years to heavily campaign in huge public rally’s such as Women’s Marches held across America that campaign for equality and female bodily autonomy. Additionally, she remains vocal about these issues in her own music.

While she may not be as widely known as legendary LGBTQ+ icons such as David Bowie, Elton John or Freddie Mercury, the campaigning work she regularly involves herself in cements her amongst these extraordinary people. This became even more apparent to the masses after videos surfaced online of her speech at the NYC Women’s March 2018. Instead of choosing to speak freely, she chose to read out a poem she’d written the night before.

Its words hold incredible meaning and speak for themselves.

For me, this moment was extremely pivotal, even if it happened on the other side of the Atlantic. For any contemporary artist to speak out so openly, on such a huge scale outside one of their shows takes enormous guts, and that’s something Halsey certainly has in abundance.

On her sophomore album she released a single entitled ‘Strangers’, followed by an LGBTQ+ music video to reflect its lyrics. As a result, a love song about two women was played all over global radio stations, even in notoriously anti-LGTBTQ+ areas. More recently this year she released another hit single ‘Without Me’, however, she came under fire when she performed on The Voice America with dancer Jade Chynoweth. The performance wasn’t explicit in nature, but many people took offence at the implication of a gay relationship inspiring the song, regardless of the fact that it was about the relationship breakdown between her and G-Eazy, a male American rapper.

Many artist’s would have left the performance as a ‘one-time thing’ but that simply isn’t the way Halsey operates. In response to this barrage of hate from homophobic viewers she took to the Billboard Music Awards’ stage with Chynoweth for a second time on live TV across America… and the rest of the world.

Her talent for not shying away on big public stages when it comes to LGBTQ+ issues, even when faced with nearly continuous hurdles, is sadly something commended by mainstream media, when it should be considered normal. In fact, in 2019, it should be considered outrageous if artists or public figures ‘shy away’ from these topics. For this reason alone it’s one of the main reasons that Halsey continues to inspire so many to this day.

I had the delight of finding myself in the line for her 1,500 capacity show in Camden recently, and it’s a true testament that she’s managed to create such a safe space for all of her fans at shows to be their truest selves - even if it might only be for a few hours.

Aside from the glitter and rainbows covering the faces of the audience as they spent a night surrounded by those they love, she took a moment to shine light on a topic that is always argued about by the homophobic and transphobic every June.

‘Why is there no straight pride?’

On 30 May, lesbian couple Melania Geymonat and her girlfriend Chris were violently assaulted on a London bus for refusing to kiss in front of a group of straight men. When she took the stage, there were no designer outfits like usual, instead she was wearing a cut away oversized black t-shirt with a photo of the couple after the attack with the phrase ‘fuck your straight pride’ on the back.

Furthermore, about halfway through the show she ground the music to a halt, giving a speech to the 1,500 people there and just about everyone on the internet too.

Although it may be Pride Month, and although I may be writing this piece about an inspirational trailblazing queer artist, the truth is that once this month is over the majority of people will seemingly forget about the daily issues that queer people face. Many will go back to being the person who witnesses discrimination against queer people and chooses to ignore it as it doesn’t directly affect them.

In an age where it seems like LGBTQ+ people have more rights than ever before, it’s vital that we instead focus on how many they’re still denied on a global scale. I think the contribution Halsey is continuing to make to raising awareness of LGBTQ+ issues, may not be as directly impactful in the short term as de-criminalising being gay in countries like Iran. However, it is significant in changing perspective in the long term to help create a truly accepting society which will prevent many young queer people from feeling ostracised in their lives. For that reason I have picked to shine this light on Halsey this Pride month.

Happy Pride Month everyone and remember to not be afraid! 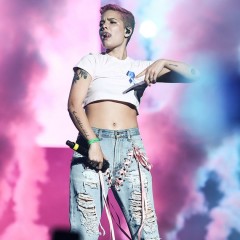 This pride month we're celebrating the 50th anniversary since Stonewall by showing a spotlight on queer figures that we find inspirational...here's a snap shot at the incredible work Halsey does to advocate for LGBTQ+ rights around the globe.