A visual journey that follows the thoughts, feelings and emotions of the singles lyrics, the music video explores the concept of one chapter closing and a new one beginning and all the emotional attachments that come with getting to grips of letting the past go and looking forward to the future.

Trevor Drury’s musical journey has been one of instant recognition. From childhood, Drury’s natural approach to playing the piano at just eight years old signified the start of a successful career that has seen Drury develop into a naturally gifted singer and songwriter, particularly during his time studying music at the prestigious London based BIMM moving over from his hometown of Tucson, Arizona . Besides his musical talent, Trevor is a recognised model, often seen wearing pieces by top designers Hermes and being the famous face of Tom Ford campaigns.

Musically, ‘Chapter 4’ is an alt pop heavy track that doesn’t skimp on the additional sounds of rock. Starting off, Drury’s magnetic vocals take centre stage frequently singing “This Chapter’s closing // It’s closing but it’s been my favourite book I’ve read in a while”, his vocals frequently fading in and out of the songs overall mellow melodies and soothing sound.

Starring Drury in all his glory, the music video visits the different emotional stages the singles lyrics candidly explore. Pensive and deep in contemplation, Trevor is left alone with his thoughts apart from the appearances made by the female dance led who uses the power of interpretive dance to demonstrate the songs storyline of making the most of the time this chapter has left. Snapping out of his day dream, Drury tampers with ordinary objects from having phone conversations to pouring a drink, the music video is thought provoking, inspiring and ethereal. 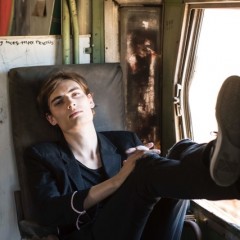