Behind all the flare, Elton John was just a boy with a dream, being himself to get where he wanted to be, and that couldn’t be a more important message to celebrate during Pride.

Pride month is all about celebrating the LGBTQ+ community, and what a community to celebrate. The unfortunate hardships of everyday life tend to marginalise those who dare to be different – scratch that – who dare to be themselves, but with each and every one who stands up with pride and is who they are is a win against those who take too much stock in that which does not concern them.

With that spirit in mind: with his new fantastical biopic Rocketman, his autobiography ME published by Pan Macmillan and looming 2020 farewell concert, who better to celebrate than Sir Elton John, with over 50 years of achievements in his arsenal and 1000’s of somewhat questionable wardrobe choices.

Regardless of what you think of Rocketman and let’s face it, it’s had a plethora of mixed reviews, Elton John is, and if the film is anything to go by has always been, unapologetically Elton. From tantrums, to love affairs, drugs and an insane amount of partying, you’ve never once seen him tone down his wardrobe choice – even when those closest to him were vocal about their disdain towards it. You’ve never seen him shy away from his mistakes or seen him pretend to be something that he isn’t; as evidenced in his 1997 documentary, directed by husband David Furnish, Tantrums and Tiaras, which has been dubbed by The Telegraph as the “anti-Rocketman”. In this age of pressure, that sees people believing they have to be anything other than themselves to succeed, the trait of authenticity is something to be commended.

Elton John is famous for his scrupulous musical talent; from coming up with classic piano melodies in an hour, to catchy song lyrics that have withstood the test of the time, his legacy speaks for itself. Whether you are a hardcore rock fan, trap music enthusiast or a pop princess, we all know Can You Feel The Love Tonight, and could probably benefit from the wise words of I’m Still Standing at one time or another.

Not only does Elton John gift the world with music of his own but he has great admiration for the musicians of our time. In an interview with Entertainment Tonight, whilst promoting Rocketman, Elton said the musicians of today is where he gets his inspiration. He talks about artists like Billie Eilish, who he had as a guest on his Apple Radio Show Rocket Hour before she became famous, Khalid, his great admiration for US singer Lizzo –who has recently blown up in the UK – and many more who he says, if you haven’t heard of them yet, you soon will.

However, Elton John is defined by much more than his music. The Elton John Aids Foundation, which this year celebrated its 25th anniversary, has been a champion in raising millions to help treat Aids and support other great causes like the National Black Justice Coalition that works on “bridging the gap between the movements for racial justice and LGBTQ+ equality.” Using his power that has come from international stardom for the greater good, for those who are disenfranchised and treated like second class citizens in an unforgiving society, is just another reason to revere him.

From a working class background in Pinner, Elton John was just a boy who was given a chance to make good on his dream to become a songwriter. He is living proof that the start you have in life doesn’t have to define you and that is a timeless message that all of us, no matter our start in life, no matter our background, sexual orientation or anything else is something we’d benefit to remember and embrace. 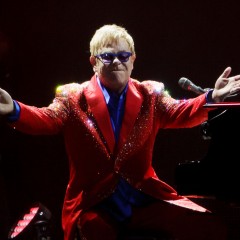 Behind all the flare, Elton John was just a boy with a dream, being himself to get where he wanted to be, and that couldn’t be a more important message to celebrate during Pride.