A year or so ago I received a phone call from my close friend, Mhairi Morrison.
Mhairi lives in Los Angeles and I live in the UK so we don't get to see each other regularly and calls are precious.

Right away I could tell that something was wrong, she didn't sound her usual energetic self, she sounded distant and scared, her voice was quieter than normal.It was right around the time that the initial Weinstein allegations had begun and the #metoo movement was in full swing.

Mhairi told me that a long time ago, just a few months after we had both graduated from drama school in Paris, she had been drugged and sexually assaulted by an extremely prominent and famous French film director.

Needless to say I was horrified. This was the first time she had told me her story. She had hidden it for 18 years ... for 18 years my dear, sweet friend had not felt that she could tell even her closest friends about this damaging and terrifying experience.

After our conversation ended I felt a surge of anger, anger that this act, that took place so long ago, had put my friend back into this frightened, ashamed and silenced state. I felt that my friend needed help to find her voice again so that she could come though this and tell her story.

A few weeks later I made myself sit down and watch a documentary on television about Harvey Weinstein and his predatory behaviour. As I sat and listened with disgust to woman after woman telling their story of humiliation, of powerlessness, intimidation and terror, I felt that same surge of anger re-surface, so I did they only thing that I knew how to do in that moment, I reached for a pen and I started writing lyrics for a song.

I thought about the women in the documentary who had found themselves trapped in situations of horrific abuses of power. I thought about the legacy of sexual harassment, assault, and rape that many, many women in all types of industries, battle with on a daily basis, and the first lines of the song appeared.

‘Big Boy plays around, holds you down, you don't make a sound / Oh, please, make him stop! But I don't wanna lose my job’

I wanted to bring as much of what these women were saying in the documentary as I could into the lyrics of the song. I wanted to tell their truth.

This song was for the survivors.

I thought about the man who had drugged my friend and rendered her totally helpless, and I thought about what I would say to him if I ever met him and ‘take your hands off my sister / step away from her, mister, / I think it's time for you to go’
were the first words that came to me. They were crystal clear, direct and to the point, and they could not be misinterpreted to mean anything else.

This was my chorus, and from this, came the rest of the song.

I find the act of writing a song a very solitary thing. I don't usually write with anyone else, not necessarily by choice, that's just the way it has gone, so it's difficult for me to get a perspective on what I've written until I've played it to someone.

I felt very protective of this song, it was so personal, a polite warning to back the hell off. It was for my friend who had been so damaged by what had happened to her that she couldn’t work for eight months, so I guess it was understandable that it took a long time until I felt able to play it to people.

A few months later I went over to Vancouver Island to start work on my new album with my good friend and Grammy-nominated producer, Joby Baker. I played the song to him on an acoustic guitar, his reaction was immediate, “yup, we HAVE to do that one,” he said.
Like most ‘protest songs’, ‘Don’t Silence Me’ was the ‘problem child’ of the album, and it wasn’t until practically the final day of recording that we found the right beat for the song. It was important for me, that there was an uptempo celebratory vibe to the song, I didn't want it to be miserable or gloomy, despite what I was singing about.

I felt very strongly that this was a cry for survivors, to let them know that they are not alone - when Joby layed down the screaming, opening riff on the Hammond organ, I knew we were on the right track.

Back in the UK I sent the track to my friend, Mhairi. Her response was incredibly moving, she felt protected, heard and most importantly, believed. She said that the lines

Were especially poignant for her.

Not long after this, I had the idea to ask Mhairi if she would like to make a video for the song, Mhairi is, after all, an actress working in LA, so it made sense for her to fuse her own talents with the song and create something that people could watch online. It would also be a big step in helping her to come to terms with her trauma.

Bravely, Mhairi reached out to her friends and community in LA and told her story, in particularly to her friend and filmmaker, Jenn Page. Jenn at once offered her considerable talent and energy to the project and out of that the now critically acclaimed music video, Don’t Silence Me, was born.

It features over 40 Women, many of whom are high profile survivors of sexual assault from the #metoo and #timesup movement. The video premiered in LA earlier this month and was covered by CBS News and The BBC, it has made headlines in the UK too and has been featured in The Sun and The Daily Express amongst others and has had over 100k views on line, and counting.

This is a protest song. I want the words of this song to help people find their voices, especially in those moments when they feel too afraid or too ashamed or too bullied by others to be able to speak out. It is for all genders, all cultures and all ages.
I hope that in those moments they will be able to listen to this song, watch this video and feel heard and believed, and, eventually, that they will be able to sing their truth, even if they can't speak it.

For more information on the Don’t Silence Me Campaign please head over to the FaceBook Page, or visit the dontsilenceme website. 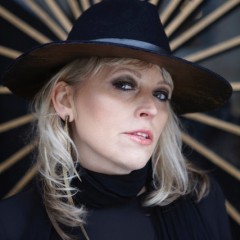 A year or so ago I received a phone call from my close friend, Mhairi Morrison.
Mhairi lives in Los Angeles and I live in the UK so we don't get to see each other regularly and calls are precious.