I will be arguing views against magicians using technology to exploit their audience portraying magic on YouTube and social media platforms in a way that's damaging. I will look at a range of peoples views and concerns to give a balanced argument.

What makes a good magician, this is the bigger question. What viewers don't realise is that sometimes there are two audiences to every online magic production, the online audience, and the one who is watching the magician live. What the online viewers do not know is that in some productions the live audience is composed of actors, hired to react and respond to supposed live magic. Is it okay for entertainment purposes to have an exaggerated response instructed by the magician just to enhance the viewers experience, or are the online audience being taken advantage of by not realising that these are actually actors. How does it make other magicians feel when using a real audience with genuine reactions that are minimal in comparison.

In this essay, I will be arguing views against magicians exploiting their audience whilst portraying magic on YouTube and social media platforms. This is for the main reason that it damages the reputation of accredited magicians and makes them look bad if the tricks are done badly and set up for staged or fake reactions by using actors or paid participants.

My biggest concern with using technology in this way is that it's not a genuine reaction if the stooge actors are told to react in a certain way to exaggerate a response to a magic trick. When a live audience of actors is used in this way you do not see the scene being set up beforehand so it is not a genuine reaction even though the viewer is led to believe its real taking advantage of the online viewer.

Therefore I would argue this is exploiting the unsuspecting online viewer. This could influence a younger audience who would take the reactions at 'face value' giving them unrealistic expectations. My argument is that when it comes to technology, there should be more transparency about how it is used on social media sites to influence viewers with the reputation of the performing art of magic in mind.

Houdini believed it is of paramount importance to expose 'fakes'. He spent lots of time in his career doing this, staking his reputation on the idea to protect the unsuspecting public of being taken advantage of. This is comparable to the online audience being exploited.

After observing a Youtube video about social media influencer and self declared hip hop magician called Jibrizy setting up fake reactions by an undercover observer it was clear to me and the person filming, this was obviously a 'fake reaction' to a magic trick where you clearly hear 'Jibrizy' say that he wants the crowd to really 'go crazy'.  This is all at the personal gain of Jibrizy and his own viewer ratings.  Jibrizys response to the exposure of his 'fake reactions' on you tube to 'the haters' and namely a lot of magicians is that he's actually more famous and better than them. Which other magicians believe is not true.  In his take on tutorials of teaching basic magic he claims these are his own unique ideas but in reality they are merely an adaption of an old trick but he takes credit for them. He also said he invents magic but there's no evidence to back this claim.  In his online youtube video his explanation that it is okay to share magic is that 'he doesn't care less, because he says he has many secrets so he doesn't mind giving some away'. When clearly a trained magician can see that it is all about viewer ratings.

There is a direct counter argument by an online response to these claims from the number 1 America's Got Talent Shin Lim, in In his response Shin Lim refers to Jibrizy as a 'Warlock level 60' he says this many times as a sarcastic reference inferring that Jibrizy is delusional believing he has actual magical god like powers. I believe what Shin Lim means is that this is impossible to reach that level of achievement and that he is a complete fantasist. He shows the actors reactions with the added caption 'definitely not actors' another use of sarcasm that infers the obvious that they really are actors. He also shows comments on Jibrizy fan page that says In Shin Lims video he quotes Jibrizy saying he's gone back to Youtube for his fans and then shows  screenshots that shows 1000 dislikes and only 257 likes. Sugesting that more people disagree than agree with this claim. Followed by lots of adverse comments from the public that he is not a 'real or genuine magician'.

I've exposed a trick I viewed online, that has since been taken down, where only a trained magicians eye will realise how the trick is performed. What the viewer sees performed in front of them is completely the opposite to what the live audience of actors are actually seeing behind him.

So therefore what they are reacting to is actually the back of the trick which is not deserving of the reaction that's being portrayed on this social media video . To the trained eye it's very clear and I can demonstrate this very easily by doing the exact same trick from both viewpoints, in magic terminology the trick has been 'debunked'.

It also takes away the mystery of a live performance if people know how its done as inexperienced 'wanna be' or fake magicians reveal these secrets to the general public to imitate. There is no comparison to a genuine live performance where what you see is 'real' and not 'fake'. Therefore maintaining the value of the performance with less skepticism.

Fake performances can damage the reputation of professionals that have worked hard to be accredited by respectable organisations such as the Magic circle and Wizards of the South.

In comparison live shows with real genuine reactions are invaluable to maintaining the reputation, mystery and credibility of every magician in the land and this cannot so obviously be set up in the ways that it can be abused online for the purpose of personal gain at the expense of the unsuspecting viewer.

With a live show 'what you see is what you get' so to speak. There is no comparison to viewing magic online with the performance of a live 'stage or close up act'. A magicians value is based on his audience. So therefore it makes the magicians audience reactions so much more important than the magician himself. Which I believe is the right way around. These are the values that are taught at organisations such at the magic circle and AWS in that respect for one another and the audience is of huge importance.

Myles Thornton President of The Associative Wizards of the South highlights the topic of the use of Technology in Magic and says that it is a very important subject to talk about as technological advancements in society are inevitable.  He argues that  'Technology effects in magic is both bad and good. In my examples I will be talking about the use of social media in magic. As George has mentioned many magicians have taken to social media to show their magic. This can have a great positive impact as those magicians that can connect and talk to other magicians from all over the world. They can collaborate on ideas, discuss magic and build lasting friendships all because they share a passion of magic. However some magicians begin to care too much about how many followers they have or how many views they are getting. This has lead to some magicians using stooges and actors in their videos in order to fake reactions that are over the top which lead to more views and followers. This is a shame because this process expose some of the methods behind the trick to the actors and stooges. Also it plants doubt in the public's perception of magicians as they will assume that all magicians use stooges and actors. Magicians try very hard to prove that they don’t use actors or stooges as they practice very hard in order to get real reactions and create magic that they can actually perform. To conclude I feel that technology will affect magic in many ways, some negative but the majority positive. Technology has allowed for the magic community to connect in a way it never had before: being able to share ideas and passion with just the click of a button'.

Myles presents a great counter argument in that Social media is bringing magic to everyone and inspiring a new type of audience and a generation more open to social media influences. I would argue that if done responsibly with transparency this is fine but with the awareness that it is open to manipulation. After interviewing a member of the general public their overall response is that 'trickery' as part of some live shows where as in the case of safety or comedian requirements a stooge actor is fully aware of this type act and so this is therefore acceptable in the parts where its used for entertainment purposes only. The flip side is that when used for the wrong reasons to deceive your audience for self gratification purposes it would be seen as cheating and create mistrust amongst the general public's perceptions towards magicians. This is where better judgement is needed even when suspecting a stooge in some cases this is okay and would not spoil the act with the above reasons in mind but knowing this was a set up with actors would make them question other magicians acts that claim to be 'real' magic and would make them more sceptical.

Doing research into this concern has led me to conclude that magicians performing the art of magic can leave an online audience open to manipulation through the use of technology and social media platforms. Overall It's the way social media is used by individuals rather than the social media itself that is the concern. The better way would be to join an accredited respectable organisation where you will get support and guidance from your peers. You will learn values and earn respect from other magicians and also how to present yourself in public. Spreading awareness of this issue will lead to more openness for the general public viewing.

Debunking 'fakes' of the time that were Spiritualist. https://en.m.wikipedia.org/wiki/Harry_Houdini

Show the Haters by Jibrizy his response to magicians backlash. https://youtu.be/zgo4zLo5nFs 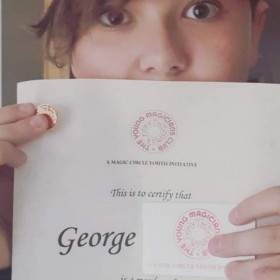 Hi I'm George, I'm 13 years old and I'm a member of the Magic circle youth initiative.
Im currently doing the Gold arts award and working on many community projects whilst developing my leadership skills.
Please give me feedback about my work.
Thank you 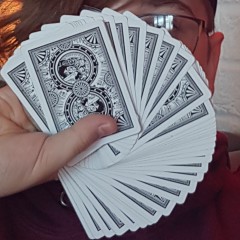 I will be arguing views against magicians using technology to exploit their audience portraying magic on YouTube and social media platforms in a way that's damaging. I will look at a range of peoples views and concerns to give a balanced argument.