Perhaps it's due to the #metoo and #timesup movements, but lately people have been asking me more frequently what it's like to be a female music producer in a male-dominated industry.

The answer is mostly a positive one, with the occasional "blip" along the way, but it all started back when I was 12 and received a Fostex 4-track recorder from a bunch of my relatives, who pooled together and gave it to me as a gift for my Bat Mitzvah. It was a cousin who worked at a local TV news station who spearheaded the idea, as he knew I was a songwriter and had been writing music and lyrics since I was in kindergarten with a level of focus that impressed him enough to think this would be the perfect gift. He was certainly correct!

From that point on, I began recording my voice and piano tracks with a feverish enthusiasm that bordered on obsessive. My parents would have to set special curfews during the week to pull me away from my newfound passion, which I slowly learned was essentially, producing records. Within a year or two I had learned how to bounce many tracks, layer my harmonies – and even layer the piano parts – and was bringing my 4-track around to school talent shows and local contests, singing live on input while the pre-recorded tracks played underneath. I didn't even play with another musician live until I went to college, so that was my early education in self-production, and I haven't looked back since.

In my teens I began experimenting with MIDI and added a half dozen synths and drum machines to my production/composer arsenal, and I got into programming and sequencing with now-retro axes like the Ensoniq ESQ-1, the Yamaha DX-7, the Roland D-550, the TR-505 drum machine and S-900 sampler, along with early Mac software including Opcode and Digital Performer. Even mentioning these tools now feels strange, as I went in a totally different "organic" direction a few years later, but nonetheless, they all contributed to my early training as a self-produced artist, encouraging me to be more creative with my recorded arrangements, and to cultivate an innate understanding of dynamics and sonic surprise that I'd learned as a young girl, hearing classical orchestral music as a ballet student. Worlds collided, tech and the classics merged in my young mind, and I realized that it was all just music, and a means to communicate ideas and emotions, period.

While I was in college, I went in a completely different direction and became enchanted with acoustic and more folk-driven music, maybe because it was more novel to me as I'd only ever used programmed elements in the past. I started playing at local coffeehouses with a violinist and an acoustic guitar player, inspired by artists like Maria McKee, Sinead O'Connor and Suzanne Vega. Suddenly the lyrics and storytelling became the focal point for me, and it was also around this time that I did a stint in Dublin as an intern for "Riverdance" composer Bill Whelan, who is also a masterful arranger and producer. I mainly watched and listened (and poured coffee and made phone calls!) but of course I was absorbing many lessons production-wise re: how to work with talented individuals to bring out their very best, and how to integrate multiple musical influences and traditions into a cohesive whole.

By the time I was in NYC in my early 20's and gearing up to make my first official album, I had already recorded and produced dozens of master-quality demos, and refined my style as an artist. By this time I also had the benefit of a wonderful engineer/production mentor, Andy Zulla, who always listened respectfully to my vision and was keenly aware of how strong and focused I was in terms of my aesthetic, along with what would motivate me as a vocalist once I was in the booth. We also became great friends and laughed a lot while working in the studio, which I think is crucial in any creative working relationship! By the time I had completed my first album with him, I felt very confident that I could record and produce subsequent albums on my own, and I maintained a small but mighty home studio in my apartment in the East Village and had folks like percussionist Everett Bradley (Bruce Springsteen, Daryl Hall), violinist Allison Cornell (Cyndi Lauper, Shania Twain), Ben Butler (Sting, George Michael), and bassist Mike Visceglia (Suzanne Vega, Duncan Sheik) coming in and out of my apartment/studio to record on a regular basis.

At that time, I was operating 2-3 synced ADATS – remember those? – a handful of outboard reverbs and delays, an oversized Ramsa mixing console and a few Korg and Kurzweill keyboard modules...but mostly it was about capturing performances. I would sing into an AKG 414 mic in my kitchen, and just unplug my fridge when it was time to record.

Within a few years though, I realized how crucial it was for me to record live with the band I'd been working with in NYC, so I began producing most of my recordings at Carriage House Studios in Stamford, CT. Most of my albums have been recorded there through the years, with some overdubs continuing to be added on my home rig. They have an ever evolving classic array of mics, amps and vintage drums, and I mostly use Neumann mics for vocals as well as for recording their amazing Steinway grand piano. I tend to put my Wurlitzer through one of a handful of Fender amps they have – or even sometimes the Leslie cabinet from their Hammond organ – and electric guitar setups vary depending what we're going for sonically. I do my best to not have too many rules when it comes to production, other than to come as prepared as possible but to also allow things to be spontaneous. I've recorded some of my albums entirely analog, and others entirely in ProTools. I hope that people can't hear the difference, because I'm generally always going for a warm, organic result and will do whatever it takes to achieve that! I often joke that I'm in the wrong era, because the records I fall back to are all from the '60s and '70s. Some of my favorite artists lately are Hozier, Passenger and Glen Hansard, and in addition to being excellent songwriters, they all also seem to have mastered the fine art of capturing a "vibe" in the studio. I imagine candles lit, and needless to say I do that kind of thing myself in the studio – dim the lights, hang scarves and boas, whatever it takes to get myself and my players in the zone!

In terms of compressors, limiters, plug-ins and the more technical side of mixing, I have worked with the same 2-3 engineers for so many years, that as a producer I have certain go-to lingo with each that they understand, and it's almost like a secret language. We complete each other's sentences; they each know if I'm going for a particularly dark or dry drum sound how we should approach that, or if I want to use a bullet mic and get a more processed, edgy vocal tone what we tend to do on a technical level. But I try not to hover too much, and let each do their thing and then fine tweak/make suggestions from there. I think that's what collaboration is all about, and if I've hired someone I believe in to do their thing, I certainly don't want to undermine their instincts or get in the way. Ultimately I'm the ringmaster, and I love producing records with a talented, capable team of engineers and musicians.

I'm so fortunate to work with incredible players like guitarist James Mastro (Ian Hunter, Patti Smith) and cellist Dave Eggar (Phillip Phillips, Evanescence) who come with open minds and hearts, having fully digested whatever musical references I've provided in advance, and charted the tunes but not become overly attached to a rehearsed arrangement. I don't really like to mock-up demos of programmed string or other parts generally, because I'd rather play a melodic theme on a keyboard or hum it from the control room, so we can organically adapt parts on the fly. But I still make sure I'm very prepared with my own ideas because you just never know what will work best, and ultimately it's about finding that magical balance between what you hear in your head as an artist, and what a talented instrumentalist might be able to bring to the table that may well transcend your wildest expectation!

Ultimately I think of production in very visual terms, almost like a mural designer, or a choreographer. I have the vision for my music, and I bring in skilled and talented people around me to help me realize it, but it's an ensemble ultimately, and my job is as much to make the process itself joyful and satisfying for everyone involved as it is to pinpoint a preconceived concept – because I think you can hear those nuances on any album, feel that energy, and at the end of the day I'm trying to communicate emotions through music.

In the past, I've written articles and answered interviews that have highlighted some unfortunate experiences I had early on as a young female producer. There were older men who hit on me, sleazy industry guys who suggested I wear this or that, or musicians who'd only look at the male engineer for feedback or connection, when clearly I was the producer on the project. But in looking back at my career thus far and certainly in recent years, I am so grateful for the support, nurturing and respect I have received along the way from more like-minded individuals with whom I’ve chosen to surround myself. Engineers/mixers like Andy Zulla (Rod Stewart, Kelly Clarkson), Kevin Killen (Elvis Costello, Peter Gabriel) and John Shyloski (Johnny Winter, Diana Ross) have been nothing but encouraging, good listeners and generous collaborators who have elevated me as an artist and enabled me to continue to grow as a producer. So while my interaction with fellow females in the studio realm has been extremely limited I have never chosen to focus on that, but instead on making sure anyone with whom I work in a studio setting is respectful, compassionate, and positive. It's a formula that has worked for me so far, and I hope that energy comes through on all my albums, including my latest, "Myopia”! 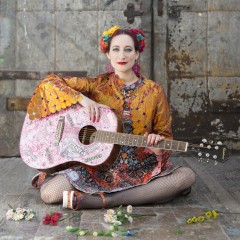 Perhaps it's due to the #metoo and #timesup movements, but lately people have been asking me more frequently what it's like to be a female music producer in a male-dominated industry.