The biggest film in blockbuster history has been out two weeks now, and I’m desperate to hear what people thought

The Russo Brothers have given their blessing to lift the spoiler embargo, stating that a big part of their films is talking about it with others afterwards. I have lots to say on the film, so thought I’d throw them all here. It should go without saying but just in case you weren’t sure:

What a film. My word, what a film. We have been building towards this moment for 11 years. It started with Tony Stark building an arc reactor in a cave (with a box of scraps) and has since seen our favourite heroes assemble, disassemble and go save the universe.

Marvel has successfully pulled off the most ambitious cinematic crossover of all time, kickstarting rushed (and infinitely less compelling) interconnected worlds from what felt like every film franchise.

Rather than writing my own review (you should go and check out the excellent one written by Tayo) I wanted to instead open this post up as a discussion forum of sorts - throwing out some thoughts I had over it and reading what you thought in the comments.

If this goes well maybe we will do some more of these looking at other cultural phenomenon, although it’s going to be hard to find something that has been as big as the MCU has been… maybe Game of Thrones?

Firstly, does this film feel like the end of a saga for you? I know that Marvel already have a roadmap for the MCU - after all, Spider-man: Far from home is coming out this summer - but will people really care as much? I personally feel like every Marvel film up to this point was a must watch, but going forwards I could see myself being more selective in what I go and see.

I loved Endgame, but it was far from a perfect film. There were a number of flaws with it, and the most problematic for me was Captain Marvel. It really felt like there wasn’t much call for her to be in the film (and she wasn’t in it much, for some really flakey reasons), and when she was she was so horrendously inconsistent. My main point of contention was during that last battle. She re-enters the fight at a critical moment, flying through and destroying Thanos’s main battleship without a sweat, but then struggles to hold off the man himself, eventually getting KO’d. Considering how insanely powerful she is, there is no reason she couldn’t immediately kill Thanos - except that the plot required Tony Stark to do it.

And man, what an emotional end Tony Stark had. It was sort of predictable given how picturesque they painted his life post-snap (and the fact his contract was up), but still, his ending was a real tearjerker. The MCU has been about Tony’s arc more than any other character. He pulled the MCU together (and nearly tore it apart with his hubris and paranoia), so to see him go was as impactful as Hugh Jackman’s swansong in Logan. Infinity War was definitely Thanos’s film, and Endgame was definitely Tony’s.

Even though Mr Stark was the focus, I particularly enjoyed how most of the characters here were given time in the film to show their grief and just be human. The most underserved characters were - as almost - Black Widow and Hawkeye. It never really felt like the MCU knew what to do with these characters (Clint more than Natasha, admittedly), and while I was brought to tears by their fight over who should sacrifice themselves to get the soul stone, it almost felt like undeserved grief.

For example, after that (exceptional) cold opening where Hawkeye loses his family after finally settling down, we learn that Hawkeye has become a murderous vigilant, massacring his way through Mexico and Japan. We never see this change, except for a brief, mostly off camera, two minute scene. But then Natasha turns up, convinces him to come with them, and then he’s suddenly a redeemed man. The whole character arc was in that single scene, and then he’s volunteering to sacrifice himself because of “what he’s become”. Maybe I’m being too harsh though, what do you think?

I think I’m finished with the Marvel humour, too. In recent years it has really started to grind, and no more so than here. It feels like jokes are forced, and so often are boring, predictable or stale. One particular scene is when Hulk is testing out time travel on Ant-Man, turning him into an old man and a baby. I feel like we’ve seen this dozens of times before, and the joke about wetting himself was equally trite.

Still though, whenever I think about this film, and the near two-dozen films before it, I can’t help but feel emotional. These have been such a cornerstone of my development growing up, and have dominated the entertainment landscape for over a decade. I remember going to see the very first Iron Man film with my dad at the cinema, and us both laughing as Tony takes raises his arms in triumph as the Jericho missile test concludes. Or going to see the first Avengers film on the day of release with essentially half of the Sixth Form instead of attending last period. Being blown away by the exceptional soundtrack of Guardians of the Galaxy, or falling in love with visual delight that was Doctor Strange. Anyone who has grown up with these films will likely have a favourite scene, or a moment, or a memory attached to it.

The MCU has pushed comic books into the mainstream, and in doing so have turned what it means to be a Hollywood blockbuster on its head. The interwoven, cinematic universe has done so push the industry forwards, and it’s difficult to see how Disney will keep up the momentum going forwards.

Anyway, these are just some thoughts I’ve pulled together about Endgame, but I have so much more to say. This film was amazing. 3 hours just flew by, and I didn’t even really notice. What did you think? Too long? Too short? Not enough Hawkeye? Was Thanos right? Are you disappointed that the Ant-Man/Thanus theory didn’t come true? I have email notifications on for the comments, so let's have a chat about it! 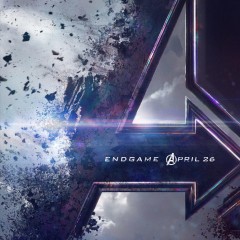 The biggest film in blockbuster history has been out two weeks now, and I’m desperate to hear what people thought