Voice MagBlogsWhy are so few film…

Only 4% of studio directors are female, why is the film industry like this and what can be done to change it?

For many, names like Quentin Tarantino, Christopher Nolan or Michael Bay come to mind, or if we’re thinking more about classics, then it would be Alfred Hitchcock, Martin Scorsese or Steven Spielberg. What unites this list is that they’re all (white) men, so why is this the case and what can be done about it?

All of this is in spite of the fact that roughly the same number of men and women watch films across all age groups. This discrepancy is also reflected when awards season comes around, with only 5 Academy Awards nominations having ever been given to women for Best Director and only one win (Kathryn Bigelow for The Hurt Locker).

The old way of thinking would be that women simply aren’t interested in directing, but that’s easily disproved by how 44% of directors with films at Sundance (the main festival for independent films) are female. No, it’s simply the case that movie studios aren’t hiring female directors.

Women are consistently denied opportunities by these studios, seen as risky investments, in spite of films like Wonder Woman, Captain Marvel and Fifty Shades of Grey doing incredibly well at the box office (with Captain Marvel making over $1 billion). The fact that this attitude persists is perhaps unsurprising given how every top studio executive in Hollywood is male.

This lack of will for gender equity on the part of studios is then compounded by the long history of sexual harassment and assault, with one survey even finding that 94% of women in Hollywood had been sexually harassed or assaulted (to varying degrees), with many being blacklisted for speaking out against this environment.

Women deserve to be able to tell stories on the big screen and this absence of female-directed films has massively detrimental effects on film as a whole. Without women, we miss out on incredible films like Selma and The Hurt Locker and end up with the same kind of stories from the same kind of perspective. This becomes most evident with the ‘male gaze’ in filmmaking, where the camera follows female actors in a way that’s dehumanising and reduces women to sexual objects.

One of the most egregious examples of this is how many of the shots of Megan Fox in the Transformers movies were aggressively sexual, which made very little sense given the broader tone of these movies - something accentuated by the aforementioned lack of female cinematographers.

Beyond this, media and culture around films needs to focus more on women behind the camera and their perspective on craft, something done incredibly well by the podcast Switchblade Sisters. We also need more female film critics to be employed by major and respected outlets, where only 24% of these critics are women and as with all of these statistics, women from marginalised groups (BAME, disabled, LGBTQ+ etc.) are even further underrepresented.

More female critics means that films aimed at women and from female perspectives can actually get the accreditation which they deserve, instead of being dismissed offhand as ‘chick flicks’. On an individual level, we need to make sure that we show up to support female-directed films, because if there’s one thing these studios pay attention to - it’s money.

In our own circles let’s watch and discuss more female-directed films (If you’re looking for a good place to start with this, here’s a helpful list from IndieWire) and female filmmakers because women deserve to be able to tell stories, and Hollywood needs to reflect that. 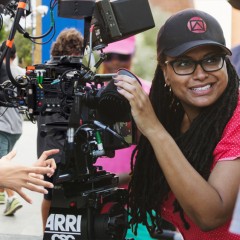 Why are so few film directors female?

Only 4% of studio directors are female, why is the film industry like this and what can be done to change it?