Voice MagBlogsWhy has the music in…

5 Seconds of Summer's recent collaboration with The Chainsmokers got me thinking about systematic problems within the music industry that make true equality hard to reach.

It’s no surprise to anyone that the recent collaboration between The Chainsmokers and 5 Seconds of Summer is currently taking the charts by storm, and with a USA co-headline tour scheduled for this autumn it looks like these two groups are together for the long haul. However, what’s more surprising is that a number of 5SOS’ fans are boycotting the tour altogether…

Make no mistake, I’ve been a fan of 5SOS for almost seven years and they played a huge role in inspiring me to pick up concert photography and start writing about music in the first place. I’m also a bisexual woman and when this collaboration was announced I was, at best, disappointed. One of the bands I'd previously thought to be paving the way for equality in today's music industry had suddenly thrown this complete curveball into my face.

In case you weren’t already aware about why 5SOS’s fans were so angry about this collaboration, The Chainsmokers have been rather outspoken about the misogynistic way that they’ve treated women before. When speaking with Billboard both Alex Pall and Andrew Taggart (the duo that make up The Chainsmokers) have, to a degree gloated about this in a way that would leave most people nauseous.

“Even before success, pussy was number one,” says Pall. “Like, ‘Why am I trying to make all this money?’ I wanted to hook up with hotter girls. I had to date a model.” - Alex Pall, Billboard

If you combine this with some other remarks made in an interview with EDMSauce then it’s safe to say that a sour taste was left on my tongue and so many other women’s as well when these interviews were published.

"There was a girl, her only condition was we were not to high five each other after… It wasn’t our finest night but we had to carpe diem…" - EDMSauce

“Just sleep with the one who will be hardest first, then move down from there… cause then the next one who knows she isn’t as hot will be like ‘wow he wants to sleep with me which means I must be as hot as the hot one', which makes her feel good…” - EDMSauce

Now you can only imagine the *slight* uproar from 5SOS’s fans when they first announced their collaboration, ‘Who Do You Love’. The band - made up of Luke Hemmings, Calum Hood, Michael Clifford and Ashton Irwin - are self-proclaimed feminists who, at their gigs, give out messages of support for their predominantly female fanbase as well as posting tweets on 8th March (International Women’s Day) which echoes this sentiment.

The Chainsmokers rocketed to fame back in 2014 with their gimmicky track ‘#selfie’ but further solidified their place in EDM with the release of ‘Closer’, a song I think we all heard on continuous repeat throughout the summer of 2016. The track featured Halsey, a bisexual and biracial American pop artist, but she has since distanced herself from the duo after an interview in which they made racist jokes about Chinese culture. Furthermore, she also became involved in an infamous twitter spat with Taggart which involved several homophobic remarks, although he vehemently denies his involvement saying that his account was hacked.

This separation led to many people labelling The Chainsmokers as homophobic, something that has stuck around to this day.

Now, what I found particularly interesting, yet also disappointing was the fact that Matt Emsell (part of 5SOS’s management team), would’ve had a hand in clearing this collaboration and tour. For anyone who might not be aware, Emsell sat down to speak with The Industry Observer in the run-up to Australia’s gay-marriage vote and spoke about his experiences as a gay man in the music industry. After stating that he wants to break barriers to LGBTQI people landing executive roles in today’s music industry it’s a small punch in the gut that this collaboration and tour have gone ahead.

“I want to see more LGBTQI people in positions of influence across the industry.” - Matt Emsell, The Industry Observer

So what we essentially have, is a situation that doesn’t morally add up on several angles. Why have a progressive, forward-thinking and feminist band collaborating with a pair of misogynistic DJ’s? Why has their team cleared this collab when one of them wants progressive equality for LGBTQI people in the industry?

I am sure that nobody behind this collaboration meant for their actions to create this kind of backlash amongst 5SOS fans. But like almost every single collaboration in the music industry, this collab is a way for both 5SOS and The Chainsmokers to make money and have the opportunity to gain more fans so both groups will have more success in the future. It’s a hard pill to swallow, but in an industry built on capitalism, this will always be the case for any band or artist.

You could ask a myriad of industry professionals, regardless of their gender, race or sexuality and every single one would tell you that in order for the music industry to grow, it needs to diversify. However, in order to achieve that kind of equality, the very same people need to take steps to make these changes themselves.

I firmly believe that there can’t be any true equality within not just the music industry, but the creative industries in general until people take it upon themselves to make changes themselves; no matter how big or small they are.

There’s not a lot else that can really be said about this collaboration, but I’d love to hear what you think about this situation and what you think could be done to improve equality in the music industry or the arts in general below! 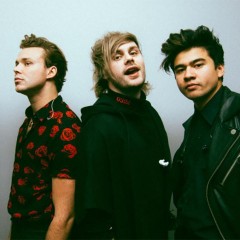 Why has the music industry struggled to achieve true equality?

5 Seconds of Summer's recent collaboration with The Chainsmokers got me thinking about systematic problems within the music industry that make true equality hard to reach.