Voice MagArts AwardBlogsShaf is back with hi…

A while ago I had the chance to sit down with SHAF, an artist full of creativity and talent, about his music video for ‘Lost Inside’ and he’s only gone and done it again with his latest track ‘Toxic’.

Move over Britney, this brand new song that’s full of catchy synths and guitar solos, with a  sound just as hard hitting as it’s lyrics is about to blow you away. At its core it’s a track about the toxicity of abusive relationships and with lyrics like “So lie to my face // Don’t force me to stay”, that really stand out against the tracks ‘happy’ sound. Of course this would please me, after all I am a big fan of tracks that I can run around to or have a bop to in my kitchen, while also being able to sit down and really listen to the meaning in their lyrics, so it is pretty safe to say that I’m a huge fan of Shaf’s latest song.

As an artist Shaf is incredibly humble and genuine, his fanbase is built on personal and heartfelt connections - something he told me back in February that he truly never takes for granted. It takes a huge amount of bravery and confidence in yourself to be as open as he is with his fans and this is something that really adds to his music and the intimate feeling his music and live gigs all have. So you can only imagine how excited I was when he asked me to photograph the single artwork for him!

After tweeting ‘Ever been in a manipulative and emotionally draining relationship/friendship/situation? Yeah it sucks.’ Toxic was available all over the world to stream, download and listen to and that’s exactly what his fans have done. With thousands of streams in its first day of release, it’s becoming ever clearer that Shaf and his music is a force to be reckoned with.

If you’re just as intrigued as I was when I first saw the teasers for ‘Toxic’ on his socials then you can go and check out the track here: 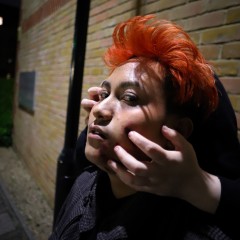 Shaf is back with his new synth-pop anthem Toxic and it’s set to be his biggest yet!

A while ago I had the chance to sit down with SHAF, an artist full of creativity and talent, about his music video for ‘Lost Inside’ and he’s only gone and done it again with his latest track ‘Toxic’.