The Luck, a brother-sister duo hailing from London are back with another whimsical Americana track ‘If This Is Love’. With over two million streams on Spotify this is one pair that you’ll want to get behind right away.

The pair, made up of Max and Esmay, began writing the track when Esmay was in the midst of a relationship breaking down. With it’s deliciously perfect harmonies and nostalgic vibe, the song seems to encapsulate that single moment of calm in your head when you decide to let fate run its course…even when you’re surrounded by chaos.

“Esmay was making her way through a breakup as we were writing the track” Max explains, “and she needed to find some positive reassurance in the experience”. She needed to know that “if it was really meant to be, then they’d eventually end up together.”

Hot off playing Americana Fest UK earlier this year, as one of the festival’s showcasing artists, the pair are now gearing themselves up for a UK tour after being split between the UK and America for the past few years. The pair began making music together back in 2011, but recently caught the attention of Paul Broucek (President of Music at Warner Bros Pictures) to work on their debut album with three-time Grammy award winning engineer Ed Cherney.

Set to be released soon after their tour, if this latest track ‘If This Is Love’ is anything to go by then I certainly cannot wait to hear what this very special and unique pair of musicians have in store for us.

A full list of their tour dates are below and tickets are on sale now: 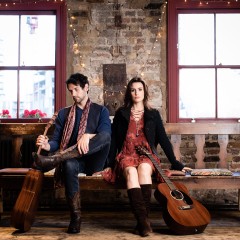 The Luck, a brother-sister duo hailing from London are back with another whimsical Americana track ‘If This Is Love’. With over two million streams on Spotify this is one pair that you’ll want to get behind right away.