For Unit 1 Part D of my Gold Arts Award, I have decided to discuss gender stereotypes in Olympic Figure Skating throughout history and how these misconceptions need to be changed.

A countless number of people feel that the unrealistic ideals that athletes are pressured into are being dismissed and put aside due to wilful ignorance.  I feel that social change needs to be brought about and I hope to raise awareness of this argument to give oppressed athletes a voice.

In the Winter Olympic Games, glamourous and form-fitting costumes are worn to accentuate an athletes figure and emphasise the steps and movements they are making. However, in the past, rules were created that were regarded as unnecessary and cliché.

In 1988, Katarina Witt who was a competitor from Germany wore a blue costume that was adorned at the waist with feathers instead of a skirt. As a result, the ISU instituted "The Katarina Rule." The regulation dictated that it was mandatory for women to wear a skirt that covered their hips and posterior, and also required that women covered their midriffs. And Witt wasn't the only who'd gone against the judges, either. A skater named Debi Thomas hit the ice the same year in a black, beaded, full-body unitard and no skirt — a choice that put a temporary ban on costumes without skirts. After this, both of these rules were lifted in 2003 and were replaced by rule 501.

When women go against the norm, they are either heavily criticised or praised depending on who you’re talking to. Many women who make the bold choice to wear a unitard are often looked down upon, similar to the idea that women were not supposed to wear trousers to the office in the 1960’s. It definitely isn’t illegal by any means but it is going against 100 years of tradition.

The idea that men must be masculine is also a commonplace belief in the world of figure skating. Tight trousers and tights are not allowed as they make the skater seem more feminine; almost like ballet dancers. In addition to obvious gender markers like women’s revealing, skirted costumes that are often preferred due to the strict costume rules, the women’s long program is thirty seconds less than the men’s. It’s based on the idea that men are stronger, but it has real implications in terms of the scoring.

Queens University Kinesiologist Mary Louise Adams wrote a book called ‘Artistic Impressions: Figure Skating, Masculinity, and the Limits of Sport’ which highlights the gender bias where it is considered as a predominately female sport, where younger and younger girls and women are competing.  Some men are considered effeminate if they don’t have a quad jump in their program as Japanese skater Miki Ando is the only woman to have landed a quadruple jump in competition when she was just 14 in 2002.

Adams says in her book that: “The fear of men who are feminine is huge. This is not just in skating or in sport, but in many parts of our culture. It makes feminine and expressive activities very threatening for men…We can see that binary operating in a really clear-cut way as men are expected to be the more athletic skaters and women are expected to be the most artistic skaters. For skaters who challenge those assumptions they…ruffle people’s feathers.”

This really emphasises the true extent of the problem we are dealing with. The assumption that people are just going to accept the clear-cut expectations is not good enough and people need to challenge these old fashioned beliefs.  It is thought that the sport has been operating at least a century behind our modernised world.

Another issue that has been raised is the anti-gay law. Many MEDC’s have abolished this now and fully accept and support people’s decisions and don’t discriminate. President Obama was sending three openly-gay athletes in the official U.S. delegation to the opening and closing ceremonies. This decision was celebrated by many and it helped to encourage other people to follow in pursuit.

Ashley Wagner, who is another figure skater said: "I am so incredibly proud to be representing a country now who is really taking a stance," she said. "I was a little bit worried for a while because it felt like we were dodging the question and no one was really standing up for something that I feel, that so many feel so strongly about. So to have a great delegation going into the Olympics, I just feel that there is more support against the anti-gay law now openly and that's something that I am very happy to hear.

The Russian law criminalizes "homosexual propaganda," which includes promoting gay rights and hand-holding which are punishable by up to two weeks in prison. IOC President Thomas Bach wants the games to be a place of free will but people are still unsure of what they can and can’t do.

In conclusion, I feel that some of the most important gender issues in the notoriously tight-lipped figure skating community are not being talked about and are being avoided at every possible chance. By providing insight into the situation, I hope that people will be encouraged to bring about change and feel confident enough to voice their opinions.

I am doing my Gold Arts Award. 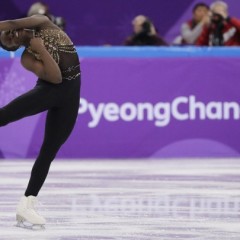 Are there gender issues in figure skating?

For Unit 1 Part D of my Gold Arts Award, I have decided to discuss gender stereotypes in Olympic Figure Skating throughout history and how these misconceptions need to be changed.