The definition of art is “the expression or application of human creative skill and imagination, typically in a visual form such as painting or sculpture, producing works to be appreciated primarily for their beauty or emotional power”. Therefore, by looking at this definition, it is hard to argue that graffiti isn’t art. Graffiti is most certainly an expression of human creativity that is shown through a visual form. However, this doesn’t excuse or give people the right to vandalise other people’s property. “Vandalise” is often seen as an over exaggeration as it means to deliberately cause destruction or damage to private property. However, no matter how beautiful the Graffiti is or how talented the artist is, the person owning the property might not like it. Thus, causing the art to be destructive.

In conclusion, graffiti can be amazing pieces of work that property owners actually end up keeping. However, whether or not the graffiti portrays talented work is irrelevant when someone doesn’t want it on their property; as it is their property after all. 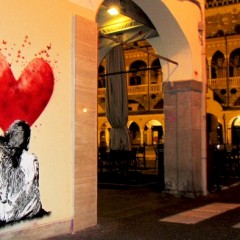