For a humanities student, the benefits of creative writing and reading are well known. But within the NHS, this is arguably less so...

If you imagine the day-to-day work of an NHS practice, you probably think of a busy reception, overrunning appointments, overworked GPs and patients struggling to distill lived experience into ten-minute gambits. It is unlikely that you imagine this: a small, intimate group, sat in silence, clustered around a table on which sit dark chocolate biscuits and a punnet of strawberries, responding to a writing prompt that asks them to reflect on the origin of their name and how they came to have it, before sharing what they have written with the group.

I am a PhD researcher, working on Gender and Sexuality in the English Department at the University of Sussex and as part of my funding package I was given the opportunity to work with Brighton Health and Wellbeing Centre on their pioneering Narrative Medicine programme. Previously, arts programmes like this one were confined to hospital and psychiatric settings – this is the first surgery in the UK to use narrative medicine in primary care.

The programme has been developed in conjunction with research at Columbia University, which found that creative writing in groups can benefit cognitive function and mental wellbeing. My programme focused on life narrative and was designed as an alternative or an addition to drug-based intervention for anxiety and depression. In the sessions, we followed a method called ‘writing in the shadow of the text’, where you read an extract aloud to each other and then use it as a writing prompt. The hope is that the more we connect with our own lives, the better we can take an active role in our health.

The shortcoming of the NHS’s focus on medication is that it can tackle present symptoms but can’t necessarily get at the underlying causes. Similarly, interventions like Cognitive Behaviour Therapy (CBT) focus on how present patterns of behaviour and thought contribute to unhappiness. Both of these approaches can deliver relatively quickly and are funded for this reason but, without having permission to go backwards, to reflect on root causes, for some people change can be difficult to maintain. Sometimes we urgently need the permission to go backwards, to understand how we have become the person we are, before we can move in a different direction.

Another, perhaps less expected, benefit of the programme was how it brought together a real cross-section of the Brighton community. There were people in the middle of their lives, sitting with people in their eighties and nineties. This bought out the expected generational conflicts (there were any number of “politically incorrect” comments, defensive reactions and accusations that “young people are snowflakes nowadays”).

However, it was also extraordinary to see how we could move past this, to pool our resources and challenge each other’s perspectives. Something strange happening: the usual dynamic of the doctor’s surgery, where the doctor is the one with the knowledge and the patient is the relatively passive one of the pair, was getting flipped on its head.

To many of us, the idea that reading and creative writing can have therapeutic benefit is not altogether surprising. But this is not common-sense to everyone, I realised, as I watched my supervisor attempt to get a room of curious GPs on board with the programme. Based on the emerging evidence, a GP’s training would ideally include modules about the importance and ambiguities of narrative. Master’s Degrees in Medical Humanities do exist in the UK but how realistic is it, that all GPs would be trained in this as standard, alongside an already demanding programme of study? For the time being, it seems good sense to drawn on the skills of humanities graduates who already understand the power of narrative in shaping identity.

And there are, after all, good reasons why doctors might want to support programmes like this one. If patients can begin to mobilise their own resources, they might not need to rely so heavily on doctors whose time is increasingly stretched. Programmes like this can redistribute skills amongst the community and, if patients become better able to take control of their own narrative, it becomes more realistic that they would enter a GP’s office and convey what they need to in order to get the appropriate care in the ten minutes typically allotted to them. 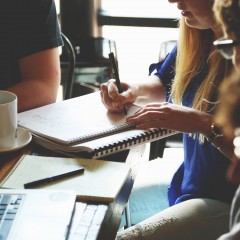 For a humanities student, the benefits of creative writing and reading are well known. But within the NHS, this is arguably less so...