Voice MagBlogsWhat is the future o…

‘Dare we ask what young people should do?’ The closing remarks of Music Mark’s annual conference about Youth Voice in music education sound provocative. For educators, however, the notion that students should be consulted on what goes on in the classroom shouldn’t seem like a radical proposal; and yet young people’s voices are rarely heard beyond the school yard.

Turning the tables, Music Mark invites students from Blaze Arts and CYAC Creative Youth, supported by Lancashire Music Hub and Crydon Music and Arts, to share their thoughts on the subject of music education. Listening to the panel call for more music production resources, it is heartening to hear questions asked of how music education should work to include a wider understanding of music outside of instrumental and vocal ability, both culturally and in terms of careers.

‘You don’t have to have a musical skill to have a voice within the music department,’ one group of attendees points out. Indeed, most students listen avidly to the charts and are deeply engaged with it beyond the classroom. But to what extent should educators entertain the laptop musician who is self-producing at home? Shuffling in seats and murmurs ensue when it transpires that online resources, self-education, as well as technology, have given many students independence from traditional services. Surprisingly, for some educators, the term ‘bedroom producer’ (a self-starting producer who uses home software) is a new one. For the student panel, however, these kind of self-starter skills, such as music production, are essential to getting to grips with the modern industry. 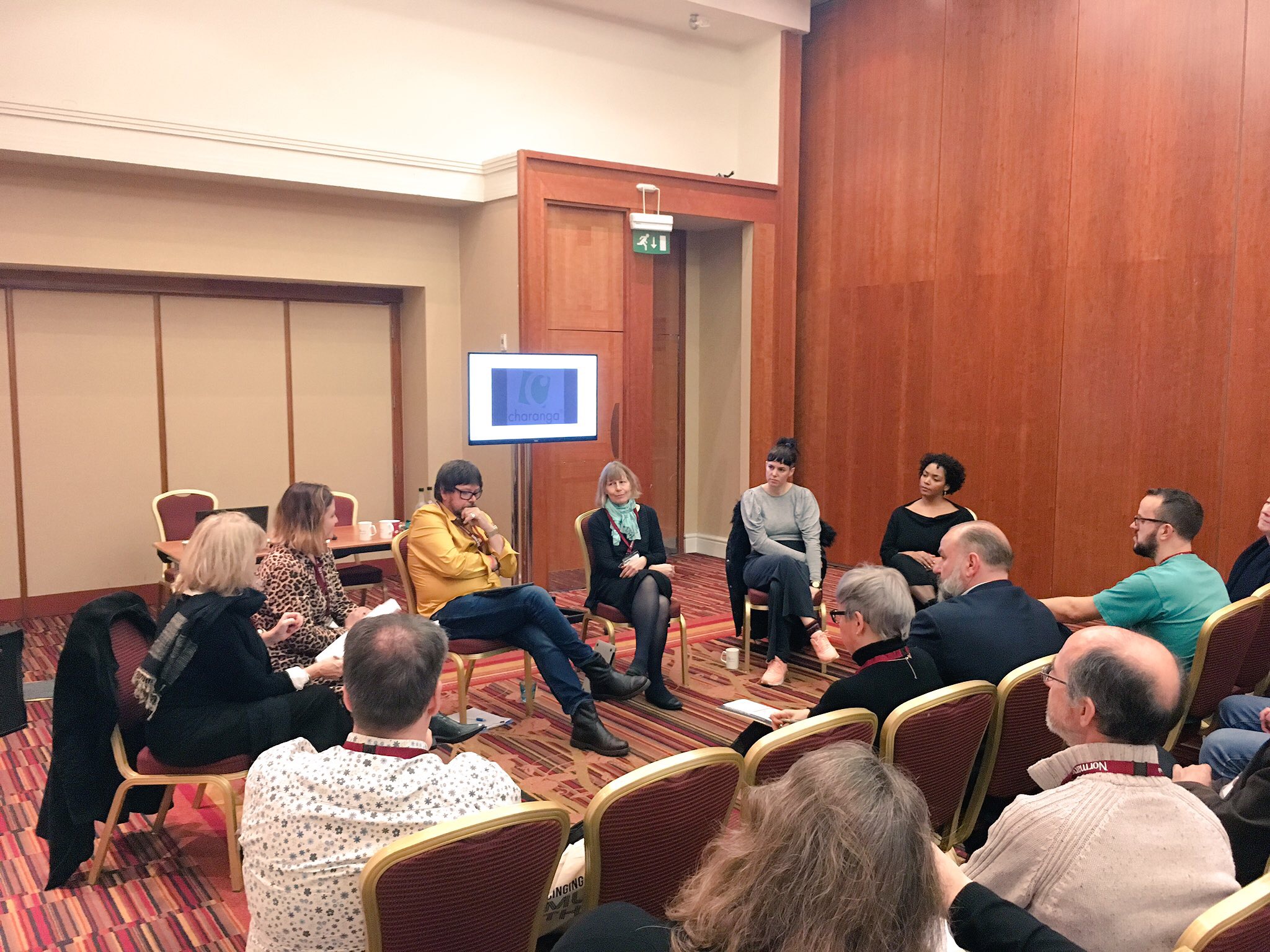 ‘It’s the modern day!’ say the youth panel. ‘Use technology: instruments and laptops, as well as audio stations.’ Perhaps now more than ever, production has become essential to carving out a career in music. Young people recognise this as an aspect of an evolving industry and understand that their education needs to keep abreast of technologies alongside traditional acoustic music lessons. Since many musicians are expected to have their own YouTube channel or equivalent platform, knowledge of production software is proving more vital than ever before.

The panel are quick to assure educators, however, that traditional modes should not be abandoned and are in fact part of a balance musical diet: ‘I value face-to-face more than online services. But online is still important for access when physical facilities are unreachable.’ Overall, the success of Music Hubs attests to this desire for contact hours as their preferred source of learning.

Beyond the youth panel, there is much promise in Music Mark’s recommendation, presented by Bridget Whyte, for the government’s National Plan for Music Education, which places fresh emphasis on outcomes rather than output and calls for further attention to be dedicated to disability and inclusion in music. The Department of Education are yet to respond to these proposals and it is not certain how or whether revisions will take place or whether they will be funded beyond 2020.

In her presentation on assessment criteria in music education, Ofsted’s Susan Aykin also stated that they will be looking to assess substance and application of knowledge, rather than the common practice of teaching to the test. acknowledges that more work needs to be done to resolve the deficiencies in current assessments. Unfortunately, Ofsted has recently come under fire in the news for its criticism of colleges offering arts courses as a means to employment. 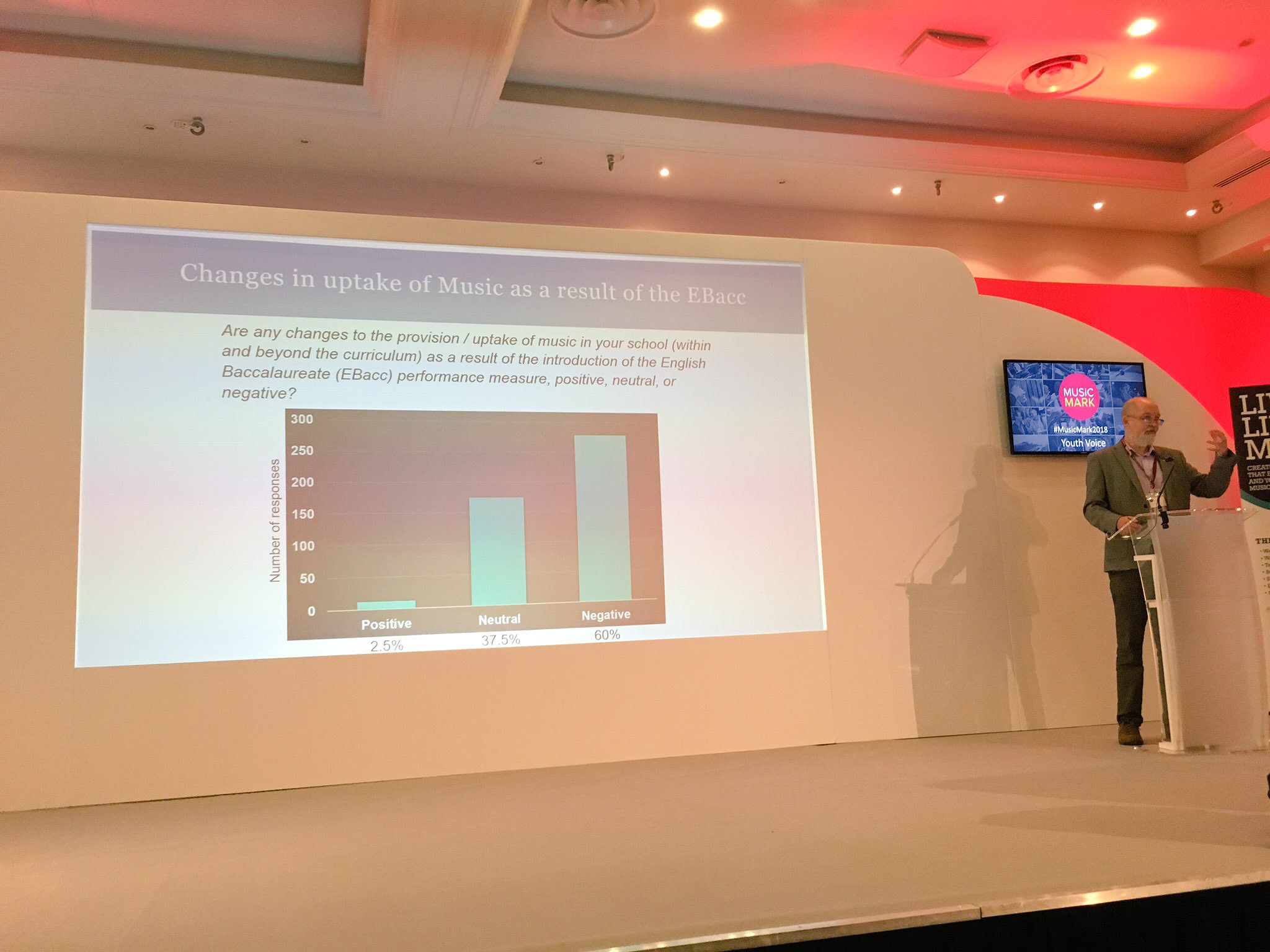 Prior to the conference, Ofsted’s chief inspector of schools in England, Amanda Spielman, described the college as ‘giving false hope to students’ who are considering a career in the arts. To suggest that arts courses are valued only for their employment prospects, that their skills are not transferable, or that creative-critical thinking is a trait not in demand by employers is one thing; it’s quite another to dismiss figures which indicate that employment in the UK creative industry is growing four times the rate of the UK workforce as a whole.

In a letter published by the Guardian, more than 100 leading artists have spoken out against the new English baccalaureate, or Ebacc, which forces students to take a government-mandated suite of GCSE subjects (English, maths, science, foreign languages and history) as potentially placing ‘one of our largest and most successful global industries at risk, one worth £92 billion a year to the UK economy.’ Squeezing the curriculum has dissuaded students from taking arts subjects, with enrolment falling to its lowest level in a decade, according to the Education Policy Institute.

Research by the University of Sussex, which found that some Key Stage 3 students have no access to music at all, is troubling to say the least. Delivering the findings during the conference, Ally Daubney, Senior Teaching Fellow in Education, blames a reduced and unsustainable curriculum, shrinking cohorts of students and a diminishing number of teachers. Similarly, Duncan Mackrill, also a Senior Teaching Fellow, says ‘It’s not just that the curriculum is suffering, it’s the extra-curricular.’ Students are left with shortened days and shortened lunchtimes, as a result of additional revision sessions for more “important” (Ebacc) subjects. 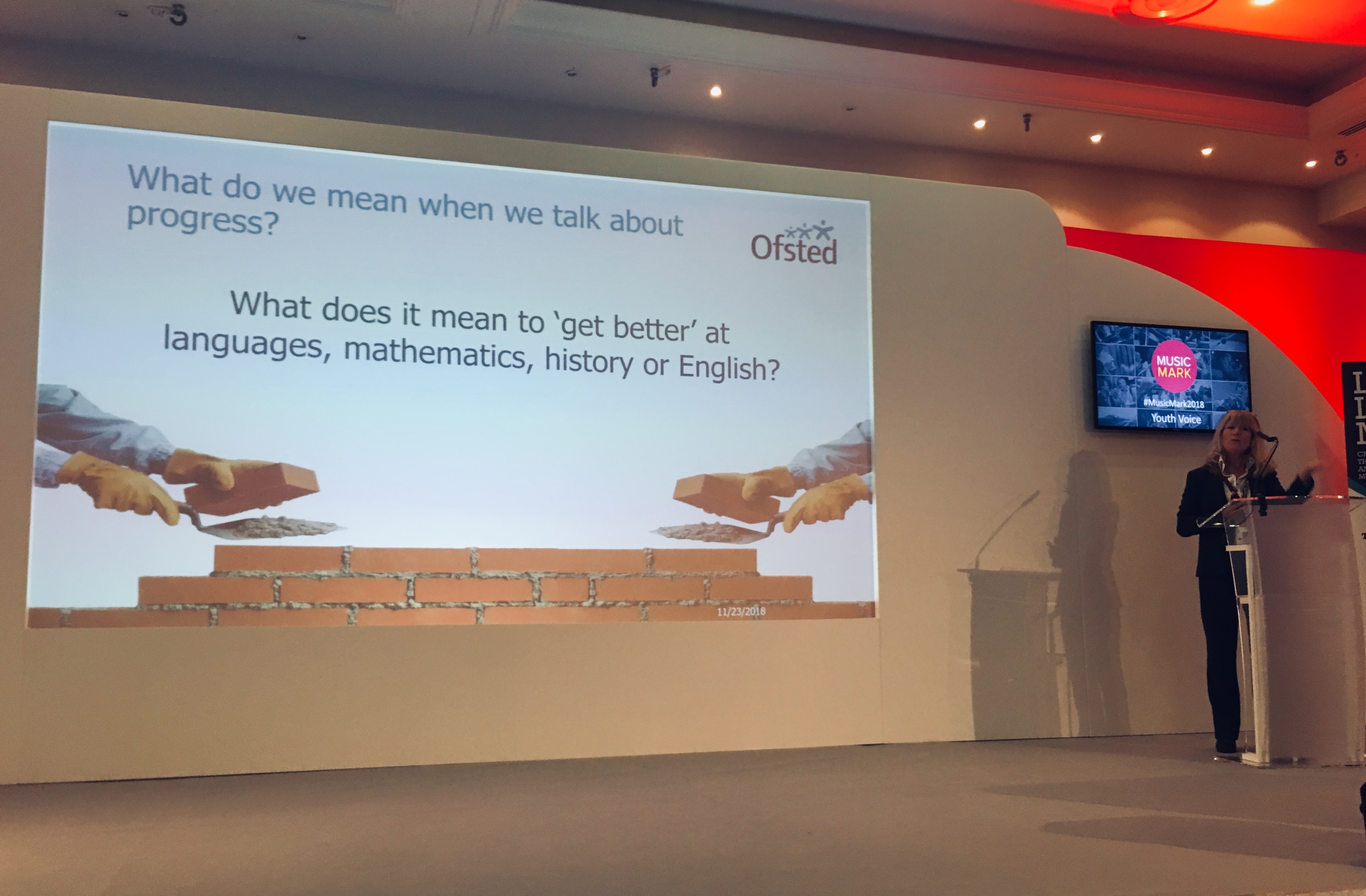 Susan Aykin erroneously runs Ebacc slideGiven that the Ebacc has been proving so unpopular, one really wonders how Susan Aykin, in her presentation for Ofsted, managed to run a slide which asked attendees of the national music conference ‘What does it mean to ‘get better’ at languages, mathematics, history or English?’ It’s a spectacular gaffe. Particularly since the subjects listed are those the government are effectively muscling out the arts with. Pairing this with Spielman’s early comments, you would be forgiven for feeling like there’s been a lack of sensitivity towards the current demands placed on music educators.

As far as students are concerned, Music Mark succeeded in bringing to the table a range of young people to have their voices heard. Not only did it put to the forefront the kinds of services students are looking for in a modern music education, but it also deepened understanding and advanced the conversation of Youth Voice considerably further than if it were just a bunch of middle-aged people talking about what young people want.

Despite what Music Mark’s CEO Bridget Whyte called ‘patchy provisions’ in schools, both Blaze and CYAC Youth demonstrated that there is evidently a demand for greater support in more diverse and technologically sophisticated ways. No matter how inspiring and dedicated teachers are (and they nearly are always both), without the necessary support, music education, along with other arts subjects, will fail its students – not the other way around.

Music Mark’s 2018 conference presentations are available to view at the following link. 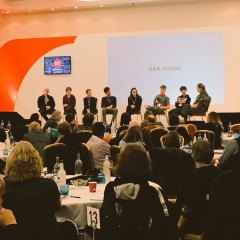 What is the future of music education? Music Mark 2018