Music Mark's annual conference was all about Youth Voice this year, so they got two young people – myself and Voice's very own Assistant Editor, Jack Solloway – to do a social media takeover of the event.

On Friday 23rd November I attended the second day of the Music Mark annual conference in Kenilworth to do a social media takeover of the event, sponsored by Trinity College London. I joined Jack Solloway, who had already spent the previous day tweeting away, and together we commandeered the Music Mark Instagram, Facebook and Twitter to share photos, quotes and musings on the day’s events.

The conference gave me a truly fascinating insight into the world of music within education, something I’d never given much thought to before. Much of my focus within the arts has traditionally been on theatre, and I realised yesterday I knew very little about music outside of my own interaction with it.

I was fortunate enough to attend a school where music was highly valued, both inside and outside of the curriculum, and all pupils were encouraged to learn a musical instrument at a young age. I wasn’t aware of just how lacking the provision of music education is in many schools across the UK; or how the situation is worsening, with emphasis on more 'academic' subjects in schools at GCSE level dissuading students from creative subjects such as music.

It was interesting to see Ofsted’s response to the issue. Representative Susan Aykin explained that the focus of Ofsted will be moving away from 'teaching to the test' to quality of education overall (which, in my opinion, is what it should have been all along); this will include a significant shift in emphasis towards music education. She informed us that 'students with the highest involvement in the arts...performed better in school and stayed in school longer’; this is something Ofsted want to encourage, and will make sure schools are providing the best arts education possible moving forward.

The keynote speech by YolanDa Brown was brilliant; she is an engaging and exciting speaker and had the whole room singing ‘We Are The Champions’, which started the day on an excellent note. Plenty of coffee and biscuits kept the energy up, and a wide range of exhibitors, displaying everything from musical instruments to folk music ensembles, turned the foyer space into colourful, lively affair.

It was great fun to be able to slip between talks and get a real taste for the huge variety of sessions being run throughout the day. Sessions included everything from mental health in music and making music accessible for deaf people, to issues of inclusivity and how to engage young audiences with classical music. Each and every presenter was confident and engaging, and the questions and debates sparked by audience members clearly showed a genuine interest everyone at the conference had in the topics being discussed.

I was honoured to then sit on a panel alongside Jack and Jacob Roberts-Mensah for the final session of the afternoon, where we spoke about communication and marketing directed at young people. I was able to share an experiential expertise I didn't even know I had, in how to use social media to boost brand awareness and attract attention. I enjoyed it - and the whole day - immensely. I met so many fascinating people and learnt so much about an area I thought I knew very little about.

I am so grateful to Stephanie Kennedy, Music Mark’s Communications and Marketing Manager, for having so much trust in me (this was my first Social Media Takeover, and my first panel!) and for making the day such an enjoyable one. I hope I’ll be able to do more with Music Mark in the future! 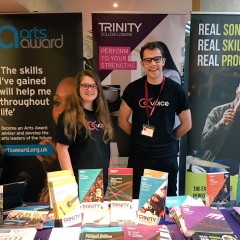 Music Mark's annual conference was all about Youth Voice this year, so they got two young people – myself and Voice's very own Assistant Editor, Jack Solloway – to do a social media takeover of the event.