There are certain stigmas surrounding homeless people that dictate how the rest of society treats them. These are outdated, callous, and hypocritical, and we should do better

As a society, I feel we have deliberately worked to dehumanise homeless people. The way we talk about them, and perpetuate old stereotypes, has stripped us of our own empathy, compassion and understanding. Instead we deal only in blame, scapegoating, and projecting our own issues onto unfortunate others.

Certain behaviours and attitudes create fear and alienation that works to separate ourselves from their circumstances - from them as people. But let's be clear here, this could be any one of us. These people almost certainly have meaningful skills and attributes to offer society, they just happen to not have any bricks and mortar to call their own.

It's fascinating - and terrifying - just how easy it is to separate our own existence from those who happen to be in a state of emergency. Every day, we walk through our town centres, parade through our own shops and are rendered temporarily blind to the world around us. We see the people lining the pavements but we also don’t see them. We choose to carry on with our lives without recognising or letting these issues intrude on our days. We walk on by without a second glance, without a thought or a care for those in less fortunate circumstances than ourselves. We are wilfully choosing to ignore a very real crisis.

This is in no small part due to the prejudice that has extended back centuries, and we continue to build upon without due consideration. How many times have you heard that someone was uncomfortable giving money directly to homeless people or even help charities who help the cause because they think the money will be wasted on drugs and alcohol? That they are in that situation because they don’t want to help themselves?

There are so many problems with this argument but I’ll detail three.

Firstly, there's a common, primeval misconception in our society that we get ourselves into these situations and, had we just acted differently, or changed our behaviour, the problem would be quickly rectified. In other words, these people have chosen this life for themselves, brought about by the consequences of their own bad decisions, addictions and delinquency. This is clearly not true. From circumstances to unfortunate timing, family issues and financial worries, there’re lots of reasons why people could be homeless that have nothing to do with their own decision making. For example, local and national government policies have a huge impact on the number of homeless people on our streets.

Secondly, it's not easy to leave these situations once individuals have found themselves homeless. Think of it like a circular flow diagram, one circumstance impacting another, which causes another, and so on. It’s not easy to break this cycle.

Thirdly, and perhaps most importantly, there’s the hypocrisy of the drugs and alcohol argument.

The biggest concern raised about giving money to homeless individuals is that they will spend the money on drugs and alcohol. Yet many in our society will spend the small amount of disposable income they have going out partying every weekend, using drugs and alcohol to escape the everyday monotony and temporarily enjoy themselves. Despite this being potentially illegal, it’s generally viewed positively or at least indifferently by society; a means to socialise, have fun and alleviate pressures of everyday life.

Let’s be clear, while it is certainly a damaging and unfair stereotype to assume that homeless people drink or take drugs, if they did - could you blame them? They would do so for the same reasons as everybody else in the world: to escape the monotony of everyday life, to experience some sense of joy, to relieve pressure, and numb the pain of past events. I don’t see that they are any different to us in their reasons for enjoying drugs and alcohol. In fact, I think if anything they have more reasons to want to escape than ourselves. It’s common for us to blame them for these ‘addictions’, but in doing this, aren’t we merely commenting on ourselves, our own societal indecencies and our own reliance on alcohol, drugs and escapism?

While we may find ourselves dehumanising homeless people, and separating ourselves from them, we’re really not different in the slightest. By arguing that the money offered will be spent on alcohol and drugs only serves to highlight that. If anything, we are projecting our own societal recreational hobbies and issues onto them in order to rid ourselves of any guilt or emotion, and justify why we shouldn’t help them. These arguments don’t hold any weight.

The minute these arguments are put under scrutiny they fall apart, revealing the hypocrisy of our societal justifications, and demonstrating how we are not only dehumanising homeless individuals by ignoring their emotions, personal realities and existence, but simultaneously super-humanising them, expecting them to be able to rise above and beyond our own self-standards.  As a society our expectations for homeless individuals are unattainable. We are all human, so it's time we started treating each other as such.

Let’s not just look out for ourselves but make the world a better place for everyone. Let’s realise we are all human and to acknowledge that asking for anything else is impossible. Let’s realise that having a home doesn’t change who we are as people, or make us any less important or less likely to follow societal constructs and everyday habits. Let’s stop blaming, scapegoating, and avoiding the issues in front of us, and let start making some change happen. 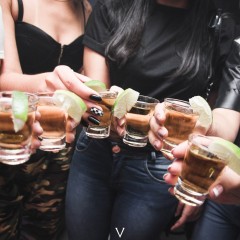 The hypocrisy in society’s attitude towards helping the homeless

There are certain stigmas surrounding homeless people that dictate how the rest of society treats them. These are outdated, callous, and hypocritical, and we should do better