Voice MagBlogsThe next steps of th…

What happens after one of the largest political demonstrations in British history?

A lie in for some, you would hope. A sore head for many, it could be assumed. Almost certainly, slipping back into the daily routine after a weekend of excitement; work, college, kids.

The reality is that the answer to that question will almost certainly be as diverse as the 700,000 who marched on Parliament to demand a People's Vote.

There were many who were always willing the People's Vote March for the Future to be a failure. Who argued that people didn't care enough about Brexit to turn out on the streets. That the numbers of those who did would be low. And anyway - they'll all be a bunch of London metropolitan elite types,

With diverse young people and students from across the United Kingdom leading the march, shaping the event and standing on stage - we put paid to that.

But whilst much of the criticism of the march was ill-founded or dubiously funded (probably by business people with links to Aaron Banks) - there is one comment which is unquestionably true.

Marches alone don't change anything. They're a brilliant tool to bring together people around a common goal. They create a sense of momentum. They scare politicians like nobody's business.

Because for every Sorcha Kirker, who traveled a 700 mile trip with a contingent from Highland and Islands Students' Association, or Rob Simkins, who led a delegation of students from across Wales - there are hundreds more people who share their views but couldn't be there on the day.

But real, tangible and legislative change only happens when a majority of the 650 MPs in the House of Commons are convinced by the courage of your convictions or persuaded by the force of your argument.

That's why For our Future's Sake and the entirety of the People's Vote campaign have a singular goal over the next eight weeks. Convince, coerce, put pressure on and persuade as many members of Parliament to vote down this shoddy Brexit Deal and to back a People's Vote.

Make no mistake.There almost certainly will be a deal - it'll just be an incredibly bad one. Theresa May will launch a Project Fear with a fury unlike anything we've ever seen. No Deal will be horrifying for this country, she will say. It's either our deal, or it's No Deal, ministers will carp.

And they will use that hackneyed logic to try and force through the worst of all worlds Chequers Plan - which satisfies literally no one. From Jacob Rees-Mogg to Justine Greening, Keir Starmer and Vince Cable - all think the Government's Deal is a bad one for the United Kingdom.

Where we become a rule taker, not a rule maker. Where the future of the Irish border is still not resolved. Where we would still pay £50 billion for the privilege of less power and influence across the world. A future vision which solves none of the issues raised by Leave voters, and raised a bunch of new ones for people who voted Remain.

There is a clear alternative, away from this mess. Where we give the decision back to all of us - a People's Vote on the Brexit Deal. We've got weeks to continue to build the momentum - where the legacy of the People's Vote March for the Future isn't just an amazing day, but a life changing vote in parliament."

Richard Brooks is co-founder of For our Future's Sake, a youth and student-led campaign calling for a People's Vote. We recently interviewed the co-founders, and you can read that here. 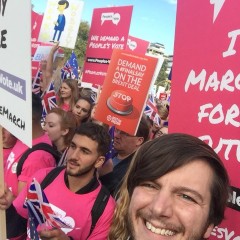 The next steps of the People's Vote campaign

What happens after one of the largest political demonstrations in British history?