After the recent issues in reference to Harvey Weinstein and the current MeToo movement/campaign which  followed, I was interested in finding out more about the issue of sexism in tv & film through interviewing those within the industry to gage their opinions, as well as through reading articles which are currently in most newspapers and magazines.

The main reasons I am interested in delving further into this issue was firstly because I am a young girl where in which the overall issues of sexism is extremely impactful on my life as a female, but also I am an aspiring makeup artist who hopefully will eventually work along side these other females in the film industry, and so the issue of sexism is extremely important and relevant to me.

I have chosen to talk about the issue of male dominance in the film industry as a girl interested in a career in makeup, which plays an important role in TV and Film.

The powerful decision makers in the film industry are predominantly male. At the 2018 Golden Globes Awards, in the best director category all nominees were men, and  in this same category for the 2018 Oscars, only 1 of the 5 nominees was female.

Does this male dominance result in sexism in the film industry?

Due to the male dominance in this area in the industry, young girls struggle to relate and aspire to persue a career in this field of work. There are a scattering of female directors such as Sarah Gavron the director of ‘The Suffragette’, but they are few and far between. When Gavron, the award winning director, was younger she states that she used to think ‘If I were a man, I’d walk in here and it would all be simpler. I wouldn’t have to be self-conscious’. This mentality of males being dominant due to filling up most of the industry needs to change for girls to realise females are just as strong and could be equally dominant when given the chance.

Whilst researching different opinions online, I also emailed a select group people in the industry I know, about their opinions on the issue. Actress Donna Gray told me how 80% of the directors she has worked with throughout her career so far have been males. She stated that when she was younger she just ‘accepted it for what it was’, however states ‘nowadays there a lot more females directing who are fantastic like Gurinder Chadha’ (Bend it like Beckham). Donna claims it is important for females to have an equal chance in the industry, as ‘women are the future’, however she does feel there is ‘improvements all the time and arts councils are encouraging more equality in the workplace’.

Well known actresses like Angelina Jolie have begun to step into the field of directing, and as Jolie has a large following, girls see her as a director as well. Also female actresses such as Meryl Streep and Emma Watson are constantly campaigning for equality in Hollywood.

‘Collaboration is the future’

Emma Watson is a UN ambassador and has created an organisation called ‘HEFORSHE’ which fights for gender equality where men and women support each other. ‘HEFORSHE’ takes a view whereby all genders should be completely equal and Watson believes that neither gender is to blame for inequality. Actress Donna Gray agrees with this approach to reaching equality through both sexes supporting one another. She stated ‘I am not saying don’t employ men, I am saying collaboration is the future and there should be a good balance of sexes in both platforms of TV and film.’ However she does feel that ‘we should encourage more females into the industry’ so that girls can voice their opinions through film.

However having canvased opinions from a cameraman, he had personally never experienced forms of sexism within his career and states that 50% of the directors he had worked for were women. However he does not disagree with the idea that more females should be encouraged into the industry.

Sexualisation of women and #MeToo

As well as the huge difference in the numbers of male and female directors. Females have also been shown to be undermined in other areas of the industry, like acting. The University of Southern California reported that of the 4,370 speaking roles in the top 100 grossing films only 31.4% were female. The University also found that women are more likely to be seen naked or in revealing clothes at 30% whereas only 7.7% of men are likely to be seen either naked or with revealing clothes. These sexualised roles that women are shown to play more than men leads onto my next point of women being sexually undermined and assaulted backstage. The Harvey Weinstein case that broke out at the end of last year is an example of how the large number of male directors and men in charge in Hollywood creates a sense of male dominance where they feel they can undermine women. Many women have spoken out about Weinstein, as well as all actresses and female directors wearing black at the 2018 Golden Globes in which the press called the ‘blackout’, to speak out against people in the industry like Weinstein, as well as to make a statement of women’s rights and to demonstrate the power women can have.

Amongst the Weintein scandal, the #MeToo hashtag was created whereby women in the industry reposted it to stand up and speak out against sexual harassment in Hollywood. However this online movement has created backlash from a collection of 100 French actresses/performers/academics such as actress Catherine Duneuve, who all signed a letter in response to the hash tag, which was published in the French newspaper ‘Le Monde’. The open letter claimed #MeToo has created unfair punishments to men and has stemmed from ‘hatred of men and of sexuality’. They believe it is unjust that ‘men have been punished summarily, forced out of their jobs when all they did was touch someone’s knee or try to steal a kiss’. French women who signed the open letter declared that they are defending sexual freedom and that women are  ‘sufficiently aware that the sexual urge is by its nature wild and aggressive. But we are also clear-eyed enough not to confuse an awkward attempt to pick someone up with a sexual attack.’ Duneuve insists that #MeToo and other campaigns against sexual harassment in the industry aren’t the ‘right method to change things’ and believes it to be ‘excessive’. In an article for the Times newspaper, Romola Garai, a British actress describes the #MeToo campaign like wearing a ‘badge which is easy to wear and costs you nothing’, yet it lacks power and isn’t significant enough to make a change in the industry. She told the newspaper that she doesn’t believe that ‘any change happens unless sacrifices are made or people risk things’.

Balancing job quotas in the industry can be seen as disregarding talent and who is best for the job. Boiling down job quotas to equal numbers of gender could cause the creativity to be undermined. The most important consideration when choosing a director to visualize and present the story should be whether they are the best director for the film (the vision they have for it) not if they are male or female.

French actress Marion Cottilard believes that analysing job quotas and creating even numbers of directors can cause further separation between males and females. She stated, ‘Film-making is not about gender. You cannot ask a president in a festival like Cannes to have, like, five movies directed by women and five by men. For me it doesn't create equality, it creates separation. I mean, I don't qualify myself as a feminist. We need to fight for women's rights but I don't want to separate women from men.’

Leading on from Cottilard’s opinion on the fight for equality causing separation, other people see the fight for equality to create a sense of inequality. If job quotas are over anaylsed and women are employed due to the fact of evening out the quota, then people can argue that this creates inequality as in other fields of work which are predominantly filled by women such as nursing where the 2011 US census reported that only 9% of nurses were male. This is not gender discrimination rather that different fields of work are taken up by different ratios of males and females.

So why does this all matter? Currently men direct most highly grossing films, meaning stories are told from their male perspective. Females make up 49.558% of the total population, so why wouldn’t I as a female want a story told from a female perspective as well as a male: an equal choice. 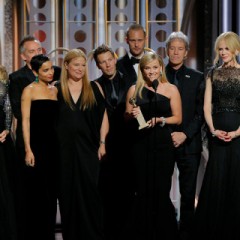 After the recent issues in reference to Harvey Weinstein and the current MeToo movement/campaign which  followed, I was interested in finding out more about the issue of sexism in tv & film through interviewing those within the industry to gage their opinions, as well as through reading articles which are currently in most newspapers and magazines.