Mumblecrust Theatre, creators of The Tale of the Cockatrice, are working on a brand new production: an adaptation of HG Wells Sci Fi classic, The Time Machine!

Mumblecrust Theatre, creators of The Tale of the Cockatrice, are working on a brand new production: an adaptation of HG Wells Sci Fi classic, The Time Machine! To make this production possible, they are running a crowdfunding campaign on Kickstarter to contribute towards the materials for the puppets, props, costumes and set for the show.

In 2017, Mumblecrust won Voice's Best Newcomer to Brighton Fringe Award, and have since been touring the UK with their first piece The Tale of the Cockatrice.

“Mumblecrust Theatre stand out with their polish and charm” - Tom Inniss, Voice Magazine

The Time Machine is an absolute classic by HG Wells, the father of modern sci-fi, and it’s crying out for adaptation for the stage! Mumblecrust will use the theatrical power of storytelling, puppetry and music in an hour-long family show, with a cast of two. They will design and make a cast of over 20 puppets, including the fluffy, adorable Eloi and the slimy, subterranean Morlocks! They will compose original songs and sound design to immerse audiences in Wells’ world. A cinematic score, composed using top-of-the-line orchestral software, will create a suitably epic backdrop to the story. Something quite unique in touring theatre.

A Victorian scientist perfects his invention, the world’s first Time Machine! It launches him 800,000 years into the future where he discovers a race of cute creatures the size of teddy bears, frolicking in a dreamlike paradise. Everything is perfect! Or so it seems… In the shadows, eyes watch and creeping feet disturb his sleep. In the future, monsters are very real indeed...

Mumblecrust Theatre is only a team of two, who will design, make, write, compose and perform in the show. It may seem like a crazy undertaking, but they've done it once and they will do it again!

“Beautifully designed set and puppets came to life thanks to these insanely talented performers/writers/musicians/puppeteers- they do it all!” - (Audience Member about The Tale of the Cockatrice)

Anything you can contribute to this Kickstarter, however small, will be a great help to Mumblecrust. If, however, you can't afford anything right now, don't worry! There's still a way to help... Just share this with your friends on Facebook, Twitter, Instagram, LinkedIn, Tumblr, Reddit, blogs, websites - you name it! This helps them spread the word which is so important for crowdfunding.

The Time Machine is the first production to be part of Theatre Orchard & Living Spit's Artist Development Scheme "Shoplifting", and the rehearsals and premiere will be held at Theatre Shop, Clevedon. Anthony Burbridge, co-artistic director of Mumblecrust, says "It’s reassuring to know a lot of talented people have our back as we continue to develop as a company, we feel so grateful."

If you would like to support the campaign, visit: www.mumblecrust.com/kickstarter 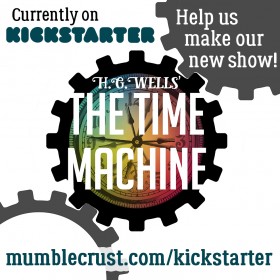 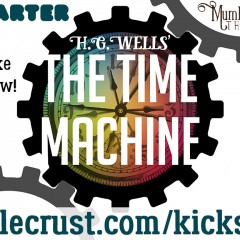 Mumblecrust Theatre, creators of The Tale of the Cockatrice, are working on a brand new production: an adaptation of HG Wells Sci Fi classic, The Time Machine!