There are undoubtedly many more shows featuring Arts Award achievers in Edinburgh, but these are two I knew. Both have their Gold, and I wanted to give them a try. I’m glad I did!

I can’t officially review these shows because I personally know people in the cast. Unfortunately they’re not regular drinking buddies and we live many hours apart, but there could be an element of bias so we hold ourselves to a high standard of honesty and openness which precludes me from an official judgement. So yes I know a couple of people; but not most, but I can say that both are shows well worth seeing. They were both on for just the first week of the fringe, so if they go on tour in future, be sure to grab tickets!

This is a new show from a Norfolk company called Reduck productions. It sold out EVERY show at the Fringe and our reviewer Sam (who didn’t know anyone in the cast) went, so you can read her full review here.  It’s a brilliant take on the Ghostbusters films, and introduces the Shakespearean language in an accessible way. The show is fun, featuring light up Ghost guns, ingenious portrayals of ghosts on stage, and very creative use of a simple set. It also had well constructed costumes and writing that must be applauded.

Most of the actors double or treble up on characters; but their visual & vocal differentiators work very well and everything is very clear. They cover a lot of storyline in their short 60 minutes, make us laugh throughout and even throw in a touch of audience engagement. Another great note was how they started - out on the steps in front of the venue whilst the audience was queuing, getting people in to the mood and even used to the language too.

A massive well done is owed to the company and I hope they take it on tour for you to experience too.

Raw Alchemy is a new young company who present this dramatic and gripping story of a group of teenagers in a chartroom. They’re all aged 18-21 and have some clear skills in acting. The production values were good especially when you consider how few props they use and the small budget they had to play with. It’s a surreal portrayal, playing live but portraying online chatroom conversations. It's done in a way that really represents the shifting balance of power in a conversation, showing us how conversations might actually go, and indeed the language used.

Considering it was such a raw piece, with all actors staying on stage throughout, the way they marked who was in a convo and who was out was simple, clear, and kept the piece moving along at pace. It was gripping, and it was very different to most of what I had witnessed at the fringe - only a few laughs being thrown in, but everyone was very much enamoured. The central story was about a suicidal teenager and the network of supportive peers and bullies who through manipulation pretend to be peers.  It was one of these 'bullies' that I personally knew as a Gold Arts Award achiever. He’s an incredibly friendly and smiley chap; but half way through I was muttering 'a**hole’ - that was how well they got you emotionally involved and invested in the characters.

This particular incarnation of Chatroom is one that deserves to be on tour nationally; not only to young people in schools, but frankly to parents who don’t realise what could be happening online. It’s as much about online safety and mental health issues as anything else. You’re drawn in, you become invested, and I can’t deny I had a tear to my eye and others in the audience were visibly sobbing. Hell, some of the cast seem to be fighting back tears by the end - that’s how much raw emotion and effort has gone in to it.  It must have been draining performing this daily.

Good luck to this new team in their venture; if they keep tackling issues in this way the world will be a better place. 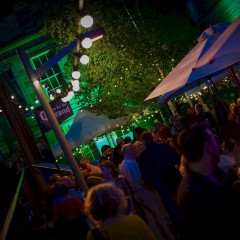 There are undoubtedly many more shows featuring Arts Award achievers in Edinburgh, but these are two I knew. Both have their Gold, and I wanted to give them a try. I’m glad I did!