I went to ceramics classes to create a burner

Week one didn’t go to plan, I ended up spending the entire lesson trying to centre with no success, and had to discard all my attempts. My teacher offered to assist by centring the piece for me so I could make a start, but one of my main goals with this challenge is to complete this project independently.

Week two was more of a success, I got the clay centred on my second attempt and had time to make a pot that I was happy with, I noted the weight and size, in preparation to replicate it a week later for the second pot.

Using the weight I measured for the last pot I went on the make the second, I made two to choose from with the same rim circumference, as whichever one I decide on will need to attach ether on the top or bottom of the first pot from week two.

On week four, once the pots had dried out a little bit, I compared the pots from the previous week, both being a good fit I decided on the best looking one which was slightly shorter and broader than the other it gives the burner a slightly feminine shape which I like.

After this decision, I turned both pots and cut a hole in the decided base pot in preparation for the candle. Then, I trimmed the base pot rim so that it can fit on to the top pot when I join them next week.

on week five I joined the mane pots, knowing that the pots would soon be too dry to do much work on I also decided to start decoration, I decided to carve small round and tear drop shaped holes through the clay, giving a sense of water droplets and lily pads. I also carved three large slits is the side of the base pot, aiming to give the sense of water a ripple, unfortunately they turned out a bit shaky and rough so i’m not very happy with them. When the end of the lesson came my teacher advised that I give it a week instead of keep working on them, just leave them and see what I thought at a later date.

So moving on the the candle, I originally wanted the it to slot into the bottom pot and turn so it would stay in place, Like this one:

The next week, after discussing the candle slot idea, me and my teacher concluded that this project was already a long one and the fitting i would need to make for the candle is complicated. So, instead of this, I will make a plate that fits around the bottom of the burner that the candle can sand on, so I spent week six making this plate.

The steaming lid is the last thing I to complete before paint/glaze and fire the burner, but before that I want to talk about the plates from last week, so as before I made two to choose from and picked the best one though because it was my first time throwing plates but is is barely noticeable and not the main feature of the burner so I intend to stick with it but I do intend to make more in the future.

Going back to the steaming lid, as I said in my timetable, I have been on the lookout for inspiration which I found about a week ago online when a potter I follow posted a picture of a pot they had made. It gave inspiration for the main feature of the lid, as well as all the little holes that I made for decoration there will be one central hole with a rim.

Most of this feature will be down to turning next week, so (on week seven) I threw the lid which was quite similar to throwing a plate so that was helpful, giving it a thick base in preparation to make the centre hole.

On week eight I turned the lid, I was very happy with the finished product and love the hole in the middle, after decoration of the carved holes it was perfect. Unfortunately in contrast to that, as I mentioned on week five I went back to the air slits on the base pot and decided to sand them down, because the piece was so dry and brittle by now it was a delicate job, and in doing so, I snapped part of the clay between one of the slits. Me and my teacher used this sort of tar to glue the piece back on and left that to dry.

On week nine I assembled the burner, on the whole I am happy with it, the broken slit held up so i’m optimistic that it’ll survive firing.

Ideas for the future:

I spent a while deciding how i wanted to decorate the burner, I had already come to the conclusion that I wanted it to be rough looking with washy brush strokes. I decided to glaze the pot cream and paint on navy strokes almost falling down the sides.

When you shared your work you collected comments about it, what did you learn from these comments? 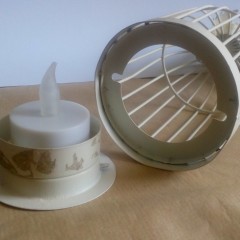 I went to ceramics classes to create a burner