8 out of 10 Cats produced an all-female show for the centenary of female suffrage. Why has it taken so long for an all-female panel show to be considered!

We live in a western society surrounded by notions of female empowerment, independent women and acknowledgements of equal rights. With the recent #MeToo movement this topic has never been more relevant or more important to discuss. We’ve come a long way in a century, finally exploring histories of women, gender and sexualities which weren’t recognised in the past. Female stereotypes and images of passive 1950s house wives are all but forgotten. But now we face a new danger. A danger of overly recognising how far we have come. Of believing we are now progressive, modernised that we’ve realised our ambitions in achieving equality, significance and recognition of women’s equal place next to men. In fact, we have hardly brushed the surface of the issue – this is just the tip of the ice berg.

Women are still majorly underpaid compared to men in every job field. Recent studies of salaries of the UK confirmed this, not to mention the outrage when the BBC recently revealed that they paid their female presenters less than men. This made the national news as a shocking story but I think female audiences and men in the know were less surprised. It shouldn’t be a one-off news story just as the #MeToo movement shouldn’t be a 2018 revelation in the headlines. We should always be talking about this, this should be a continuing and active conversation and protest, not just a isolated media storm or a trending headline. It needs addressing in everything we do. It’s not just about celebrities it’s about half of the entire population of the country. It’s about us.

I decided to write this article when I was watching a recent episode of ‘8 out of 10 Cats does Countdown’. Now I love this TV show. It’s funny, quirky and a surprising hit of entertainment and comedy. It makes interesting an otherwise boring and ailing old TV show, and developed from mish-mash experimentations of various regular programmes one evening on Channel 4. Now it’s loved by many as late night entertainment. I am an avid fan of Sean Lock and Jon Richardson, having seen them live performing stand up several times.

But on recently it was an ‘8 out of 10 Cats does countdown special’, celebrating 100 years of suffrage with an all-female panel of comedians. It was meant to be a celebration, a fun evening recognising the importance of female representation and women receiving the vote but I couldn’t help but feel sad whilst I watched it. It made me feel disappointed and worried about the world we live in. Every night on the week you can turn on the TV and see male comedians on television. It’s quite often that a comedy panel will consist entirely of men or maybe have a token female for representation. Yet it’s very rare that you turn on the television and see a panel entirely of female comedians. It has literally taken 100 years to pass from when women received the vote to even consider having an all-female panel of a popular television show. By the following week the show had reverted back to its usual formula of all men besides Rachel and Suzie.

My problem isn’t with this celebratory episode of the show. It is great that this show is considering doing something positive for women that very few panel shows are prepared to do. But it also shows the sad state of the world. Having an all-female panel of comedians shouldn’t be a one off or just for a ‘special’. It should be every day, just like we see all Male panels every day. There’s no reason this couldn’t be done. There are plenty of female comedians wanting to make a name for themselves. There’s no shortage in female creative talent. There is actually a surplus of people trying to get jobs in the arts versus how many jobs there actually are. So, let’s create more jobs.

Let’s make female comedy panels on TV a regular everyday normalised activity. Let’s get female actors and comedians paid the same as men. Let’s allow all ages, all sizes, all genders and all sexualities all disabilities the same airtime on TV and across all entertainment. Let’s equalise pay for all genders for all sections of job type. Let’s equalise exposure and promotion for all genders across all society. Let’s forget stereotypes and dismiss Neanderthal notions of this being a financial risk. That’s why it isn’t happening. How can it be a financial risk to finally allow viewers to accurately see themselves represented on television? The statistics speak for themselves, there are more people out there than your stereotypical masculine types, and these want to see equal representation.

It’s similar to the recent Wonder Woman film. It was almost promoted as the first female superpower film even though it wasn’t and it was significant that it had a female director. But the media and the press put so much pressure on this film to being a success. If it had failed, if it was a flop, it wasn’t just one film that was down the pan, it would have been every female-led movie ever. That’s an enormous amount of pressure. There are thousands of male-led films and superhero films. Nobody decided that because Green Lantern was terrible we should never make any more male-led films. It’s a ridiculous double standard. Similarly, the failure of the recent all female Ghostbusters film clearly indicates that we should never attempt an all-female ensemble again, obviously! It’s absurd thinking.

I fear that today we pretend we have dealt with all these issues of gender inequality, however now we are just as unequal but it is in danger of becoming hidden, buried beneath media promotions, press deception and clever marketing. We need to speak up and stand out, continue to press for change and awareness of issues. It’s not just women either, it’s all marginalised genders and sexualities. This needs to be heard, recognised as a continuing important constant problem.

I’m using my pen to speak out about this; what could you do to help make change? 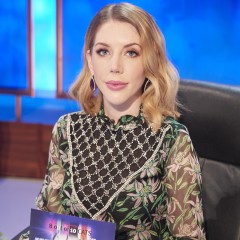 8 out of 10 Cats produced an all-female show for the centenary of female suffrage. Why has it taken so long for an all-female panel show to be considered!