Caroline Lucas appeared as the guest speaker at the Free University of Brighton (FUB) event to talk about her mission for a more sustainable world.

The Co-leader of the Green Party and the MP for Brighton and Hove, Caroline has been an activist for almost 30 years and was the first Green representative to secure a seat as a Member of Parliament. Green politics are concerned with more than just environmental issues; the central point of Caroline Lucas’ politics is that everything is connected. She believes we need to re-structure all aspects of our lives, not just our attitude towards the environment, in order to achieve a more sustainable world.

For Caroline, a ‘green world’ is centred on four main principles:

In order to achieve environmental sustainability the UK needs to change the system on which our economy functions. As a basic fundamental, we need to re-design our consumer methods by changing from single use elements to re-usable elements. A prime example would be moving from finite natural resources to renewable energy.

One of her arguments is that our lives operate on a global scale: the carbon footprint of each individual is much bigger than need be due to globalisation. One of the main consumer industries that proliferates destruction of the natural world is the international food economy; year round access to seasonal produce with one crop being flown to the opposite side of the world and swapped for another has a huge impact on the environment. Instead of operating on a global scale, Caroline argues that food economies should be re-localised in order to create a more sustainable system. More on the Green Party’s food campaign can be found here: Stopping The Great Food Swap

To Caroline, the issue that perpetuates the current economic system lies in our perception of growth and development. The UK’s prosperity is measured by its Gross Domestic Product (GDP). This is represented at the central factor on which determines our country’s status; however, it is a measure of money not wellbeing. Robert Kennedy famously stated that ‘GDP measures everything but that which is important’. This quote draws attention to the underlying issue that our world is focused on economic growth rather than on sustainable equilibrium. For the Greens, a ‘steady-state economy’ is a more humanistic measure of the economy. It doesn't measure in GDP alone, there is economic activity but it doesn't have to grow. It is qualitative development over quantitative.

Surprisingly, the UK is one of the most unequal countries in the world when it comes to social equality. This inequality is bad for everyone, even the rich. For the Greens, the redistribution of wealth is necessary to create a fairer world: to achieve this there needs to be higher income and wealth tax rates. As well as this, the language we use to discuss tax needs re-framing. The language surrounding ‘tax’ often has negative connotations, which frequently is referred to as the ‘tax burden’. Instead, the way we regard tax should be through its true purpose: communal benefits and access to services for everyone.

The Greens also advocate the new concept of a basic income scheme which is being piloted in various countries, including Scotland. The idea is that a set income will free people up to make deliberate career choices and also recognise their time that is currently not valued as work, such as, volunteering or being a carer for relatives. Furthermore, with developments in the field of automation and AI, there is huge scope for many mundane and monotonous jobs to be automated. This freeing up of labour is another argument for a universal basic income (UBI).

The UK’s current involvement in the arms trade and arms treaty defies humanitarian policies of non-violence. The arms treaty and the creation of nuclear weapons both go against Green policies of sustainable governance. The UK is one of the five Nuclear Weapon states and although the UK government claims to be in support of disarmament, they fail to show any commitment to the cause. A global treaty has been approved to ban nuclear weapons and was endorsed by 122 countries. Unfortunately, the UK did not attend the talks despite government claims to support multilateral disarmament. Furthermore, the UK’s involvement in the arms trade is helping to fuel the war in Yemen as a result of the arms deals between the UK and Saudi Arabia.

In order to achieve a fairer political system that recognises each community, the Green Party advocates grassroots democracy. Caroline explained that Brexit is a clear example of the frustration felt by the British public. As it stands the current political system does not accurately represent each constituency; in order to gain a better representation of electoral voters the political system must be re-structured so that MP’s have to be more loyal and receptive to their constituencies in order to maintain their positions. This could be achieved by encouraging democratic participation through grassroots systems rather than representative systems.

To highlight the underhand tactics that occur in parliament, Caroline explained the ways that big fossil fuel companies influence policy in their favour. ‘Experts’ from these industrial businesses are seconded to government to lend their expertise and thus are able to influence policy makers. With the system as it stands, we cannot reach a sustainable world where the powerful elite are able to influence governance for business and profiteering purposes.

I had the opportunity to speak to Caroline about what she thought of the UK education system. Currently under huge stress and suffering cuts in government funding, the country’s education is not a priority to the UK government. I know many people that work in the education system, but as a result of the pressure put on teachers and the red-tape, many of them are looking to alternative options. Over the years I have heard more and more about different educational approaches, to name just a few are: Waldorf, Montessori, Steiner and Reggio Emilia. These schools vary in their methods but all have a student-centred focus with self-directed learning as the main approach. Caroline testified to the benefits of these more holistic and engaged educational approaches saying that we can look to the likes of Denmark and Sweden for evidence that these approaches work. The UK’s attitude towards education is stuck in the 20th century but in order to move forward this needs to change.

The evening gave a broad overview of the ways in which we can work towards a better future demonstrating that, ultimately, social and environmental justice is inextricably linked and both systems must be reconstructed to achieve a fairer world. 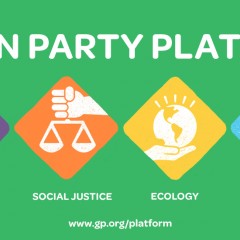 An evening with Caroline Lucas

Caroline Lucas appeared as the guest speaker at the Free University of Brighton (FUB) event to talk about her mission for a more sustainable world.