Voice MagBlogsTwo Weeks with a Tru…

On my travels I spent two weeks with a #MAGA fan, who also happens to be one of my favourite people in the world… and I can’t reconcile the two

The first stop of my gap year was Fort Lauderdale, Florida, where I spent nearly two weeks with family friends. I was slightly nervous beforehand, not just because I was embarking on a ten-month solo trip for the first time, but because I’d only really met the aforementioned family friends once, a couple of years earlier, and I was slightly unsure what it would be like. They had invited me to stay, however, and who was I to turn down a two week holiday in the Floridian sunshine?

Fortunately for me, they are two of the kindest, funniest and most generous people I’ve ever met, and after a couple of days I felt like I’d known them forever. We went to Art Walks and graffiti exhibitions, on boat trips and to pottery classes, did jazzercise and watched Moana (I insisted, and they loved it!), and - despite threatening to feed me only lettuce - they took me to several vegan restaurants, and happily ate the vegan carrot cake and cinnamon rolls I baked whilst singing Hamilton obnoxiously loudly. It was a very busy, very fun couple of weeks, and when we weren’t doing any of the above, the husband and I were usually debating.

You see, he supports Trump.

I love debating, and while I try to always be open to other people’s opinions, like anybody, I’m very…passionate, shall we say, about my own. I firmly believe, for instance, that Trump is a rude, brash, misogynistic joke of a president who fed on the fears of disappointed and disillusioned people in order to secure power he should not have. Needless to say, my friend doesn’t share that view.

He is highly intelligent, very politically aware, fair and generous. While he does have money now, he didn't growing up, and he has an intimate knowledge of the healthcare system in the USA due to a very ill daughter who has been in and out of hospitals for years. He isn’t even slightly racist or sexist, and his reasons for supporting Trump are all intelligent, legitimate reasons.

For example, he told me a lot I didn’t know about Obamacare, particularly the negative sides; everyone has to have health insurance, even if they are healthy, so some people are now paying more than they were before. That said, having lived my entire life in a country where everyone can get free medical treatment when they need it, I can’t object to a national healthcare system, even those with flaws like Obamacare and the NHS.

There’s also the fact that Trump is one of the only US presidents to have ever kept his pre-election promises (as much as I wish he wouldn’t), and that his opponent, Clinton, wasn’t exactly a much better option. She’s just as corrupt as he is, and neither of them are at all likeable in my opinion.

But Clinton was still vastly preferable to Trump, for one crucial reason: Trump’s behaviour, particularly towards women. He is openly, blatantly, obnoxiously misogynistic, and the comments he has consistently made about women for years, continuing into his presidency, are ones I can’t ignore. His reaction to any sort of criticism from a woman is to insult her looks. Always her looks. As if that’s the only thing that matters about a woman. According to his numerous tweets (which are a joke in themselves) and interviews, Heidi Klum is no longer a ‘ten’ because she’s fat, Arianna Huffington is ugly inside and out, and Carly Fiorina, his Republican rival in 2015, would never win because no one would vote for her ugly face.

Comments like this have been coming from Trump for decades, and they’re hardly a big secret - everyone heard about the interview when he talked about ‘grabbing women by the pussy’ - and yet he still got voted into office. The people who voted for him legitimised his behaviour; it’s clearly completely acceptable to treat women like objects whose only value is in their looks, despite the fact that it’s 2018 and I thought we were beyond that. Apparently, I was wrong.

I love my friend, and I have so much respect for him, but I genuinely cannot understand how he can see how Trump treats women - and other minorities, but that’s a whole other article - and still support him. Many children are now growing up with Trump as a role model, as the leader of their country, as one of the most powerful people in the world, and they are hearing his remarks and witnessing his misogyny and believing that is okay, even right. Are those children going to grow up to be feminists? Are they going to fight for gender equality? Somehow, I doubt it. 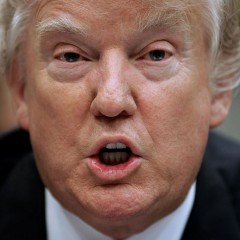 Two Weeks with a Trump Supporter

On my travels I spent two weeks with a #MAGA fan, who also happens to be one of my favourite people in the world… and I can’t reconcile the two