Do films by the streaming service deserve a place at award ceremonies?

Cannes Film Festival has secured its position as one of the most traditionally prestigious events in the international film calendar, yet has seen itself surrounded by controversy recently for its list of bans for the 2018 awards season. Alongside an embargo on red-carpet selfies, films produced by Netflix and other successful corporate streaming services have been banned from competing in the festival and winning the coveted Palme d’Or. With Netflix removing its films from the festival in light of this decision, leaving Cannes without a number of promising english language films, it appears a cinematic feud has been born.

Whilst both these ‘models’ of cinema have their individual flaws, including film boards snobbery and Netflix’s tendency to flirt with the boundaries of award ceremony regulations, they are not incompatible. Guidelines about the limited role streaming services can play in the cinematic tradition forces a divide that otherwise needn’t have existed. The glitz of cinema and award ceremonies need to evolve alongside the world of film they celebrate, and should be open to films regardless of which platform they may use.

Alienating one of the largest, and consistently growing, forces in contemporary movie-making may seem like a questionable move for the Cannes board, and it appears tensions are running high between the traditional world of awards ceremonies and Netflix directors. Following the announcement that films which had not secured a theatrical release in French cinemas were forbidden from competing for the Palme d’Or, Cannes artistic director Thierry Fremaux condemned Netflix’s position in cinema. He described in a statement his belief that the “intransigence” of the instant streaming service Netflix provides “is now the opposite of ours”. Yet Fremaux is not the only figure to place cinema against the small screen. Steven Spielberg dismissed projects funded by the streaming giant as “TV movies”, stating his belief that they had no place in cinematic award ceremonies.

It certainly seems a bizarre decision on the part of film boards and award ceremony directors to prohibit a platform with an internationally extensive audience from competing at Cannes. In January 2018, Netflix hit a record of 117.6 million subscribers to its service from across the globe, and this figure continues to grow rapidly. With Cannes having a reputation for being a strongly conventional festival, surely allowing films guaranteed to gain widespread attention from Netflix’s platform would further the popularity and success of the festival?

The successful operation of Netflix and similar streaming services has done little to hinder the progress or economic prosperity of modern cinema. The number of people visiting UK cinemas has largely remained the same over the past decade, with a slight growth of 2 million in the last two years resulting in 170.6 million audience members being admitted to UK cinemas in 2017. It is true Netflix may not conform to cinematic definitions, but contemporary innovations are creating their own artistic platforms which are just as much a part of the artistic sphere of film as cinema, and deserve to be celebrated as such.

With Vanessa Kirby’s performance as Princess Margaret in The Crown being recently awarded at the BAFTA’s, Netflix has evidently been accepted into the Television establishment, so why is its position in film so unstable? Film boards determination to protect the seemingly sacrosanct nature of collective viewing at a cinema, and the technicalities of corporate wars, should be put aside so film festivals and award ceremonies can refocus on their original objective. Celebrating the artistic merits of film, and rewarding this rich and multi-faceted form needs to become the centre of these events once again.

Streaming services are undoubtedly transforming the way we consume cinematic content, whether for better or worse. Small time directors or low-budget projects now have access to new corporate sources for production budgets, allowing talented filmmakers the opportunity to produce art. However cinema continues to develop in the future, it is clear Netflix isn’t going away any time soon, nor is its commitment to creating and funding content, and it is thus transforming the film industry. Cannes, and film festivals just like it, need to evolve with the changing face of the industry they represent, and readjust their focus to allow the active celebration and reward of deserving films, regardless of their platform. 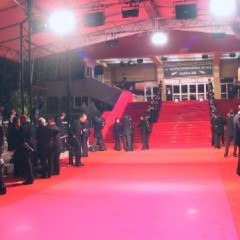 A Cinematic Combat: The Clash Between Netflix and Cannes

Do films by the streaming service deserve a place at award ceremonies?