Voice MagBlogsChildren in circus a…

Are children in the circus more prepared for the world beyond their homes?

I chose to explore children's role in circus as it has influenced my life greatly and I have experienced firsthand how hard it is for children to be accepted with the label of 'circus performer' and how difficult it is for a child to fit into both environments.

For children working in the circus it is getting harder and harder for parents to self educate their children with the laws becoming ever stricter on keeping your child in academic education from the age of five to sixteen. Travelling families are becoming more restricted under this law and it will soon have an effect on the face of traditional circus performances as fewer children have the ability to travel, perform and learn the form of art that passes from generation to generation.

Just recently the Irish government has decided to cut the outreach of scholarly work to traveling circus families. The children in schools have no more right to an education to the children on the road, it may be harder to learn maths and English while travelling but they will learn so much more about life and how to look after themselves. By allowing children to learn while they're in their circus environment the community can continue generation by generation in the traditional manor.

I grew up in an urban circus environment meaning I did not travel around as much as children who grow up in a touring circus, in some ways I had the best of both worlds. However, when my parents did have to travel for work the school was reluctant to let me go, as I got older it got more difficult for my mum to persuade the school to let me travel too. I believe that it is equally as important to learn about the way the world works as well as lessons like math, science and English as it provides skills that they will need in the future that school can't teach. Also by traveling across the globe, even the country, you can widen your understanding of your surroundings and teach yourself to be creative and independent.

If circus were to become part of school curriculum even in a subject like physical education it could close the skill gap between genders as the range of skills that children could learn is much wider and there is always something for everyone. Many aspects of circus training are dangerous, for example knife throwing isn't something parents would want their toddler to take part in. However, the parent can still teach their child to be safe with knives by showing them which way to hold and carry them and how they give them to other people or put them down. It's like scissors. By doing this the child is fundamentally safer than they were before as they aren't scared or curious of what it does. 'cotton wool kids' may be safer while they are living at home but have less experience once they leave the comfort of their house, and circus children who perform more seemingly dangerous stunts are valued for their skill and feel appreciated and safe while they are performing as they are prepared for the task. This is why I believe a circus education can be more useful than an academic one.

Also the safer disciplines in the circus network can be more physically and mentally challenging when taught than the mundane lessons children learn at school. For example, juggling is made up of patterns; this works the logical side of the brain harder as maths and movement are combined, also aerial skills are extremely good for stamina and strength as you learn to lift your own and someone else's weight.

'Clown' is one of the many labels that are pushed onto circus rooted children, not many circus performers are clowns as it is only a small branch on an entire tree of skills, it is a very mature skill even though it may not look it and takes a lot of time to master.

Circus is misunderstood by the children of today. I believe that if circus was brought into the school curriculum there would be less labeling of the art form and more appreciation. Some schools have gone as far as to bad handstands, cartwheels and foreword rolls from the school grounds; these are the things that most children will remember from being in primary school because they were fun and challenging at the same time.

To conclude I think that children living with a traveling circus should be allowed to have a full education no matter where they are and that circus should be used in schools as it gives everyone involved a fair chance to be good at anything they set their mind to. Also circus arts teach children to extend their knowledge beyond the classroom for example Pythagoras theorem is used in the plotting of a tent and textiles in the designing of costume. Therefore children in circus are more prepared for the world they live it weather they stay in circus or not. 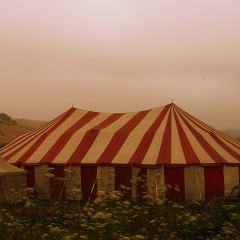 Children in circus and education – ready for the world?

Are children in the circus more prepared for the world beyond their homes?