A look at the pros and cons of Scottish Independence… what do you think is the next best step?

Growing up in Scotland, it wasn't unusual for someone to quote Braveheart whenever they disagreed with a decision made down in Westminster. A few years ago the idea of Scottish Independence went from just that, an idea, to a possibility. Around me my friends called for a vote, claimed we didn't need the rest of the UK and the time had come for the young voices of Scotland to be heard.

At the time, the vote fell short and a lot of people were disappointed. However, this does not compare to the levels of frustration, anger and sadness I experienced in Scotland following Brexit. With all 32 council areas in Scotland voting to remain and a 62% vote overall, it isn't surprising that there are many Scots who want their independence back.

The question is, would Scottish Independence really help the country, or put it in a worse off position?

Firstly, let's look at the pros of Scottish Independence:

On the other hand, when one looks at the cons of Scottish Independence, it cannot be denied that there are a higher number:

Looking at the facts, it's clear that the pros could greatly benefit Scotland. However, the cons could devastate the market for the country and not only that, cause great disruption across Europe. With so many facts up in the air, all possibilities and no solid answers, I myself can only lean one way.

I believe Scottish Independence will be great for the country one day and I believe they will achieve it. However, I don't think that now is the time. Like the last referendum, politicians for Scottish Independence are basing their movement on the passion and idealism of people who are upset about the unknown. With Brexit on the horizon, no one can know for sure what is about to happen. However, surely surely Scotland should having both feet shot, and wait to see what happens first.

They may take our EU membership but they will never take the independence in our hearts. 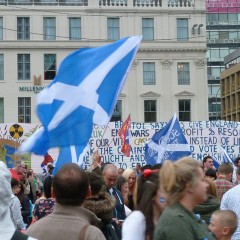 Is the Scottish referendum a good idea?

A look at the pros and cons of Scottish Independence… what do you think is the next best step?