Britain is currently undergoing one of the biggest political, social and economic disruptions it has ever faced, and those who will feel the long-term impact are failing to make their voice known.

A startling observation I made during my time at the Suffolk EU Alliance March was just how weighted the attendance was towards the older generation.

Graciously hosted at the University of Suffolk in Ipswich – a campus university no less – I was shocked to see the lack of presence from the student population.

While I appreciate that this is a stressful time for students, with exams and dissertation deadlines looming, taking 30 minutes out of your day to literally walk out of your front door to participate in a march to protect your rights as EU citizens shouldn’t be beyond capacity. They should see it as further investment in their job prospects – there is no point having a degree if you can’t get a job!

Polling data is, at best, only reasonably accurate, but it nonetheless can provide a useful indicator of the breakdown in voting behaviour. Ipsos Mori found that of the total population 18-24 year olds, only 53% of them bothered to vote, and only 64% of those registered showed up at the polling station on the day.

To a degree it appears to confirm the long held, often bandied belief that young people are simply apathetic to political causes, even if the cause is to mitigate irrevocable damage to their future employment and prosperity prospects.

It quite frankly annoyed me that so few young people showed up. Perhaps it was idealistic to believe a march in sleepy Suffolk would generate the necessary emotional response to raise the youth from their mid-morning slumber, but what will? As Ipsos found, the referendum itself didn’t invigorate us, and with less than a year to go, and the Government floundering on every aspect of our departure, we still don’t seem ready to speak up.

On the other hand, it was reassuring to see such a positive turnout from the older generation fighting for Britain staying in the EU. It has perhaps been too easy to paint the old as closed minded, and nostalgic for a Britain that has no place in a modern world. To see such a large contingent come forth and speak out against the loss of their children’s European rights, a restricted job market and the Government walking the country down a path that will become increasingly difficult to come back from is encouraging.

One person I spoke to said he felt it was his duty to beat the drum on behalf of his son, who is in his 30’s with children and doesn’t have time to come on marches or get heavily involved. A fair comment, perhaps, but I did feel there is a sense of ‘if not now, then when?’

We are due to leave the Union in 2019, almost exactly a year to the day. While we may be granted extensions, the reality is that for British nationals and europeans living in the UK, life is going to dramatically change in the upcoming years. If we don’t seize control of the narrative, present our own ideas and opinions to challenge the current thinking, we are going to be left dealing with this mess for decades.

Am I wrong? Are young people showing their commitment to discussing and engaging with the Brexit process in other ways? Let me know in the comments! 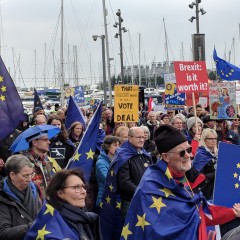 Do young people even care about Brexit?

Britain is currently undergoing one of the biggest political, social and economic disruptions it has ever faced, and those who will feel the long-term impact are failing to make their voice known.