Women often appear as a mere footnote in the background of history. With the patriarchal limitations controlling the structure of society, women were only truly able to push themself into the social, political and economic limelight within the last century. However, there are a number of powerful and independent women who were able to enforce change and reform the nature of society despite the restrictions placed on them. To celebrate Women’s History Month 2018, I want to share a few of history’s forgotten women, who managed to accomplish inspiration feats despite all the odds.

Born 1759 in Spitalfields, Mary Wollstonecraft was a writer, philosopher and one of the earliest advocates for women’s rights who was able to publish manifesto’s outlining her views.

Wollstonecraft was a highly educated women, and travelled to France in 1792 to observe the ideological revolution occurring in France before the Jacobin Reign of Terror seized control. Whilst in France, she wrote the anonymous publication A Vindication of the Rights of Men as a direct response contradicting Edmund Burke’s pamphlet, which argued oppressive systems of government should be protected with reform prohibited. By challenging a key male British philosopher, Wollstonecraft established herself as one of the few significant female voices during the Enlightenment.

Her first work which outlined her early feminist ideology, A Vindication of the Rights of Women, was published anonymously in 1792. The publication acted as one of the earliest feminist texts to exist in Britain, and argued for social equality between men and women, particularly in terms of education. Wollstonecraft also attempted to write a novel outlining her feminist views and desire for social equality, through the narrative perspective of a working class female prostitute. However, Wollstonecraft unfortunately died due to complications with childbirth, leaving the novel unfinished.

Prince was born in 1788 in Devonshire Parish, Bermuda, to an enslaved family of African descent. She lived and worked with her family in the Parish until age 12, when she was first sold by her master and separated from her family. Prince had a number of masters in the following years, and moved between various West Indian islands working on different plantations and farms. During these years she suffered extreme hardship, and frequently endured sexual abuse at the hands of her masters.

In 1828 she was brought to Britain from Antigua by her then owners, the Wood family. Whilst on British shores, she sought out the Anti-Slavery Society who helped her gain her freedom in Britain, as slavery had been outlawed by Parliament in 1807. However, Prince desired to return to Antigua where she had been separated from her husband, and in 1829 successfully petitioned Parliament for her complete freedom so she could return to the West Indies without fear of future enslavement. During her time in Britain, Prince worked closely with Abolitionists and, in 1831, published The History of Mary Prince as an account of her experiences as a slave. This account marks Prince as a hugely significant figure in British history, as she became the first black women in the country to publish her own narrative on the horrors she endured as a slave.

The nature of her account was so visceral and disturbing that many readers initially considered the publication unbelievable. Whilst little is know of her later life, Prince’s work attracted a significant readership, and furthered sympathies for the cause to abolish slavery in British colonies, where it was still permitted.

Fry was a Christian philanthropist, social reformer and advocate for the improvement of prison conditions across Britain. Having previously engaged in philanthropic work as a practicing Quaker, in 1813 Fry was informed by a friend of the appalling conditions of Newgate prison –  particularly the women’s yard. She visited the prison and was horrified by the cramped and dirty conditions of cells that women who were awaiting trial were forced to share.

Following this, she began to regularly visit  the women of Newgate prison, supplying them with clothes and establishing a school and chapel. She also introduced a monitoring system for the prisoners, and inmates had compulsory sewing duties and bible studies to help them earn a living once they left prison. In 1817, alongside 11 other Quakers, Fry formed the Association for the Improvement of the Female Prisoners of Newgate, which resulted in her being invited to the House of Commons to give evidence on the state of London prisons.

Whilst her evidence was initially ignored by the Commons, Robert Peele introduced reforms to the system in the 1823 Gaols Act after being appointed Home Secretary, having been sympathetic to Fry’s work and cause. Fry’s charitable work continued late into her life, and she continued to advocate for Prison reform across the nation, helping social philosophers such as Joseph Gurney in their research into the British prison system.

Constance Markievicz was one of the most revolutionary political figures in the early 20th Century, and was the first woman elected as an MP to the House of Commons in 1918 following the enfranchisement of women in the Representation of the People’s Act. As a member of the Anglo-Irish aristocracy, Constance was a highly charitable individual, running soup kitchens for striking families struggling to eat during the 1913 ‘Dublin Lockout’. She famously took part in the 1916 Easter Uprising in Ireland, and was one of the only women court-martialed and sentenced to death. However, this sentence was lifted following a general amnesty agreement, and she was released in 1917.

Months after her release, Markievicz was imprisoned once again for participating in a plot to destabilise the British government in Ireland. It was whilst she was serving her sentence in prison that she was elected as Parliamentary representative for the Dublin St Patrick’s division. However, after her release from prison she refused to take her seat in the House of Commons as a member of the Sinn Fein party, as the organisation refused to swear an oath of allegiance to King George V.

Markievicz continued her political works late into the 1920s, acting as Minister for Labour in Eamon de Valera’s Irish Assembly. She was one of the only women to hold a position of significant political power in the Irish Free State government.

Born in 1900, Payne was one of the most notable British and American astrologists and astrophysicists, whose theories completely reformed the way scientists view the cosmos.

Payne began her undergraduate studies in botany, physics and chemistry in Newham College, Cambridge in 1919. Following her graduation, she received a fellowship to study astronomy as Harvard College Observatory in 1923, and later became the first woman to earn a PhD in astronomy from Harvard’s sister school Radcliffe College. Payne rose to acclaim within academia after discovering in her 1925 doctoral thesis that stars were mostly composed of hydrogen and helium, contradicting scientists previous belief that they were made from the same matter as the Earth. Payne’s thesis was so highly controversial at the point of discovery that she was initially dissuaded from publishing her paper, but her discovery was later heralded as pivotal in her field.

However, the masculine nature of science and astronomy in academia meant Payne remained a technical assistant at Harvard University for a number of years. When finally promoted to a lecturer in astronomy in 1938, the university did not list her courses until after the Second World War despite her contribution to the syllabus. Later in the 1950s, Payne was promoted to the role of Professor, and finally to the position of Chairman of the Harvard Astronomy department – the first woman to head a department in the university’s history. Whilst her career was prevented from accelerating at the pace it deserved, Payne’s discoveries reformed the nature of modern astrophysics, and paved the way for women in science in the modern day. 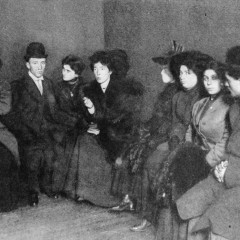