Reviewing my one-week experience in the Archives at NT Studio

In my little experience of archiving prior to this work placement, I anticipated sorting through heaves of unread files, racing through the menial tasks. It would be laborious, or repetitive at best. Instead, the dramatic landscape served as a rewarding challenge. Theatre, I believe, has the power to unite and empower any audience, from the youngest theatre fanatic to the mature practitioner, and being immersed in this theatrical world was important to me. I needed to see behind the silver screen of performances at a time when society appears determined to deprive this generation of its ties with performing arts. Art is anything and everything, something our lives, albeit unconsciously, thrive on.

Being involved in the theatre archives provided a new perspective behind-the-scenes. In the National Theatre Studio, I had the responsibility of searching for production records and files, costume bibles and stock numbers in the repository of Royal National Theatre Archives. Some days included searching for archive materials that were requested from curators, journalists, theatre students and practitioners. Other days included preparing materials for a seminar on Jocelyn Herbert, an influential British stage designer, organised at UAL.

I would locate these production files in the archive basement and discover the eclectic records that were a dramatic blend of art, technology, history and culture. Poring through National Theatre’s material, I could sense a rich diversity of records in the studio’s basement, ranging from programmes and prompt scripts from the inception of the company in 1963 to recent digital recordings and production photographs. The files were so well organised, and comprising some of the greatest dramas, from the richly atmospheric account of The History Boys in 2004, the elaborate adaptation of Michael Morpurgo's War Horse in 2007 and the classic Shakespearean tragedy of Othello in 2013. First production programmes for the shows of the plastic theatre-sensitive Tennessee Williams and the musical romantic, Betty Comden, for instance, were organised in National Theatre’s vibrant theatrical repertoire.

As a dramatic transitory art form, we generally celebrate live theatre performances and overlook the making and recording process. For some, it is a fleeting experience, solely appreciated in the moment. But, what of the critics’ responses and press releases that can capture the legend of a matchless opening night, the meticulously studied screenplays and show programmes that credit the scene directors, the visionary stage artists and cast? Witnessing the preservation of these rich files was humbling, to say the least. And when I was invited to a free backstage tour of National Theatre’s main site on the final day of my work experience, I was able to observe the stage preparation, costume design and visually stunning puppet-making process for the Lyttleton Pinocchio show (2018). Backstage, as well, was a magical retelling of the art of making theatre.

When you are immersed in National Theatre’s archival collection, it is impossible not to cultivate independent research skills and a genuine interest in its history of diverse and reimagined classics, unmatched plays and musicals. You are welcomed by a famed institution that denies solely appealing to a particularly cultured or literate class. Rather, the archive provides research space for everyone, young and old alike.

Discover more about careers at the National Theatre here. 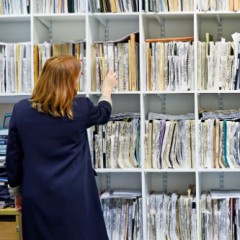 A week working at the National Theatre Archive

Reviewing my one-week experience in the Archives at NT Studio